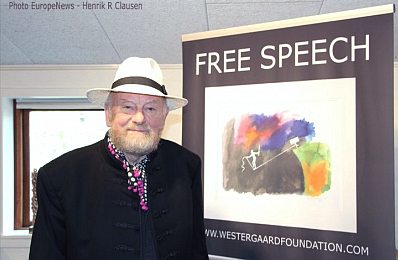 Many thanks to LN for translating this article from the Swedish alternative news site Samhällsnytt:

The well-known Danish artist Kurt Westergaard has died at the age of 86. Westergaard became widely known when his illustration of the Muslim prophet Muhammad was published in Jyllands-Posten in 2005.

As a cartoonist at Jyllands-Posten, Kurt Westergaard became the embodiment of freedom of expression in Denmark, Berlingske writes in a obituary of the artist. His cartoon of the Prophet Muhammad created one of Denmark’s biggest foreign policy crises ever, Ekstra Bladet recalls.

Westergaard has described himself as “a culturally radical half-hippie who advocates peace, space for all and good coexistence.”

In addition to creating a foreign policy crisis, Westergaard’s drawing made him an object of hatred for Muslims around the world. According to information, a price of several million kronor was put on his head, the newspaper writes. He was soon forced to live under the constant protection of PET, the Danish security and intelligence service.

Attacked in his home

On January 1, 2010, a man with a Somali background broke into Westergaard’s home and attacked him with an ax and a knife. Westergaard escaped by locking himself in his bathroom, which the authorities refitted as a security room.

Police were quickly on the scene and shot the attacker in one leg and arm, after he also attacked them with his weapons. The man was sentenced to ten years in prison and then deported for life. Following the assassination attempt, Westergaard’s PET bodyguard protection was further expanded.

A couple of years later, a 29-year-old man was also arrested. This after making a bomb threat against Westergaard.

Westergaard was born in Døstrup in North Jutland. Before he started as a cartoonist at Jyllands-Posten in 1983, he had worked for several years as a teacher of German and a school inspector. At Jyllands-Posten, Westergaard continued to work as a subscriber until his retirement in 2010.

“I want to be remembered as someone who fought for freedom of speech. But there is no doubt that there are those who instead remember me as a Satan who insulted the religion of a billion people.”

Westergaard fell asleep in silence after a long illness. He leaves behind a wife, five children, ten grandchildren and one great-grandchild.