Catastrophic flooding took place last week in several regions of western Germany. The image below is from an appeal for help for flood victims that appeared in the tabloid Bild. Note the ethnicity of the poor helpless “German” family. 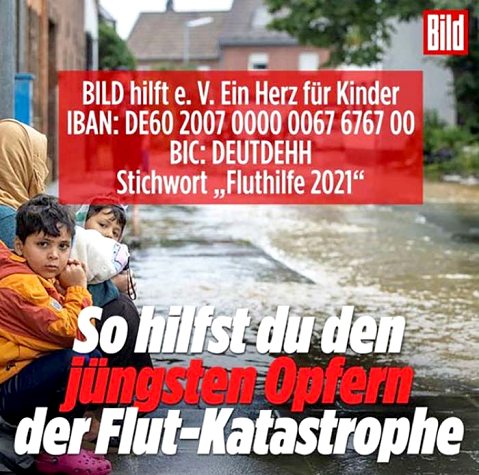 Hellequin GB has translated two pieces about the floods. From PolitikStube:

Is that a German family who lost everything in the flood? BILD should be ashamed

The comments speak for themselves:

Anabel Schunke: The comments below the picture speak volumes. People want to show solidarity. But with their compatriots. They want it to be about the Germans too. And that’s legitimate. For years it was about “we” helping, that “we” had to take in refugees. Why aren’t Heinz and Hilde shown now, who may also have lost their belongings and for whom their house has always been their home? Why do German victims never have a face in the media?

Sorry, you probably achieve the opposite in this way. Of course, I feel sorry for all the victims of the catastrophe, but you usually feel more sympathy and empathy for people to whom you feel culturally close. Who else should I identify with in this country and show solidarity if we Germans are never given a face in the media? When it’s always about others?

A few more comments without attribution:

Also from PolitikStube, the spending priorities of the German government during the time of the floods:

260 million donation to WHO, but only 300 million for flood victims

Does anyone still remember the €9 billion Lufthansa, as one of many large corporations cashed in last year? In addition, more than €20 billion goes abroad as development aid every year, half a billion of which goes to the economic superpower China. And for their own citizens, in such a major catastrophe, there is a paltry three hundred million. You have to imagine this.

Berlin makes politics for everyone, just not for the well-being of its own citizens. There is always unlimited money for large corporations, foreign countries, and for their own pocket. For the citizens, as you can see from the pensions, which are now over 50% below the poverty threshold of €900, it is even difficult to find a billion in times of disaster. It shows once more that this FRG administration is not installed FOR the German people.

While Germany is drowning, Spahn donated €260 million to the WHO

July 16, 2021: Jens Spahn is back on a vaccination tour and is also giving the WHO 260 million euros from our tax money for further vaccination propaganda.

We have not yet heard of emergency aid of 260 million for the flood victims. There are only declarations, but as we know, it will take forever for money to arrive, if at all.

24 thoughts on “A Flood of Globalist Multiculturalism”