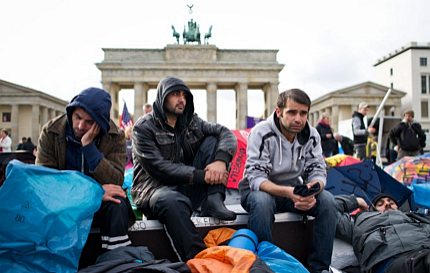 Horst Seehofer is the former Minister-President of Bavaria who now acts as Minister of the Interior in the CDU/CSU government of Angela Merkel. I’ve been watching Mr. Seehofer’s political career with interest for more than ten years, and have concluded that he is a slimy opportunist of the first stripe.

Mr. Seehofer took a look at the recent knife jihad in Würzburg that left three people dead, and concluded that the acts of the killer represented an “integration deficit” — that is, the German people are somehow responsible for the Islamic misogyny of the Somali mujahid.

Würzburg massacre due to “integration deficits”?

It was to be expected that the left-green dominated media would shy away from the knife perpetrator and woman-slaughterer from Würzburg, like the devil from holy water. This goes so far (at stern.de) that the murderer had allegedly traumatic experiences with right-wing extremists in East Germany.

There is really no depression that is deep enough in this journalistic scene. But are politicians like Interior Minister Horst Seehofer really far from taking the terrible events in Würzburg as an opportunity to ponder publicly about “integration deficits”?

Seehofer is particularly surprised that the perpetrator, a rejected but not deported asylum seeker from Somalia, has lived in a homeless shelter for years. But what is it that amazes the minister? He and Chancellor Merkel are responsible for opening the borders to hundreds of thousands of young, culturally alien men such as Somalis in 2015 and then leaving them to their fate. Wasn’t the possible consequence of this decision, namely the “failed integration” that Seehofer now complains about, foreseeable back then? Was successful integration the only conceivable thing?

This is not even primarily about all the later bloody acts in Würzburg, Freiburg and elsewhere. Even the Somali did not become a murderer straightaway. It took years for him to reach for the knife and to work off his obvious misogyny in such a gruesome way. When they opened the border, did Merkel and Seehofer never think about the consequences of sexual and cultural frustration in not a few young men from Islamic regions marked by violence and chaos? However, it is the duty of political decision-makers in the highest state ranks associated with the sworn mandate to observe such aspects in order to protect their own people.

It is therefore a shameful diversionary maneuver on the part of Seehofer to somehow fix the responsibility for what is happening in Würzburg locally. The stupid reaction of the mayor of Würzburg , who could not think of anything better than to warn in all seriousness against a general suspicion against refugees constructed by himself, suggests a cumulative municipal incompetence. However, the basic problem was not created in Würzburg, but in Berlin. And names are associated with Berlin that have to be mentioned in the recent massacre. Seehofer is just one of those names.

6 thoughts on “A Failure of Integration?”