Our Bangkok correspondent H. Numan takes an eastward field trip to investigate an urgent issue: the status of Taiwan. 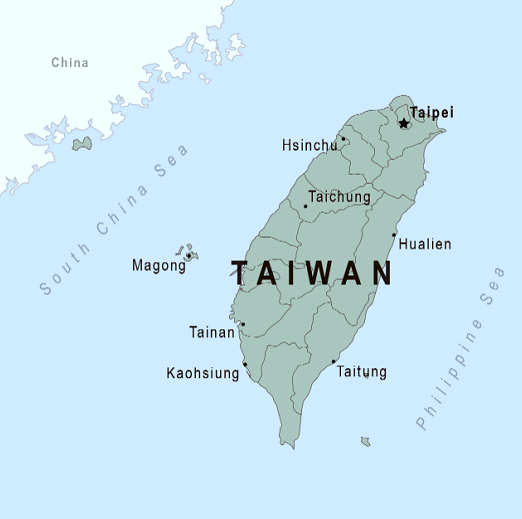 For the last couple of months there has been a lot of attention over Taiwan. Now even more, with a senile president in the White House. The Democrat Party is busy replacing senior military officers with more party-compliant officers. Biden is mounting the red mule of war. The rhetoric is cranking up. Will China invade Taiwan? Lots of comparisons can be found on YouTube. They compare the strength of China with that of Taiwan. It seems like an invasion is imminent. How can Taiwan possibly defend itself? The answer may surprise you: yes, easily!

First, let’s have a look at a possible invasion. In order to invade Taiwan, China needs a US president busy elsewhere, and preferably a blithering idiot. They couldn’t have asked for a better president. Not only is Biden senile, he is — almost certainly — bought and paid for by China. Remember the laptop you don’t hear about? Biden’s son Hunter also visited China, and did naughty things with young Chinese girls. We don’t know that for sure, as the laptop is ‘under investigation’. Given Hunter’s track record, you can safely assume the Chinese taped everything. Supposing daddy doesn’t comply, it can and will be leaked. This year an invasion is out of the question. Why? You can only attack for part of the year, from May until November. For the remainder of the year the weather doesn’t allow for it. Next year, then?

Don’t be fooled; the People’s Republic of China is not going to invade Taiwan. All comparisons I have seen — a lot! — often forget to mention or take into consideration:

Numbers don’t say much. Yes, if Taiwan had a land border with China, they would have been a Chinese province 72 years ago. Only Taiwan is an island, 180 km away from the mainland. That’s six times the width of the English Channel. The Chinese navy is just as experienced and dangerous as the German Kriegsmarine: not enough to successfully invade. The Germans couldn’t do it across a 30 km stretch of sea; the Chinese can’t cross a 180 km stretch of sea.

You have to know that the most dangerous operations any military can perform are airborne drops or naval invasions in hostile well defended territory. That’s why paratroopers and marines by default are the very best units in the military. They have to be.

Unlike what you often read about the Maginot Line, it did exactly what it was build for: the Germans couldn’t cross it. Their solution was to circumvent it, and attack through the Ardennes Forest and the Low Countries. The commander in chief of France was Maurice Gamelin at that time. He was unwittingly helping the Germans by sending his entire reserve forces towards Breda in The Netherlands. They never got there. On the way they had to retreat back to Dunkirk. When the French government told Churchill they didn’t have any reserves anymore, that was the reason. They were taken prisoner or evacuated at Dunkirk.

Now, Taiwan has been fortified massively for 72 years. You don’t hear a lot about it, but Communist China has tried everything possible to take over Taiwan for 72 years. And failed miserably. There is a problem when you apply maximum political pressure for 72 years nonstop. You can’t apply more pressure. All you can do is invade. Which the Chinese won’t do; it simply can’t be done.

The Maginot Line could be circumvented. That’s not possible with Taiwan. The Taiwanese army doesn’t have the very best military equipment in the world. They don’t even need it (though they often and loudly complain about it). All they need is good enough equipment. They have plenty of that. And lots of more than good enough equipment.

Yes, they have the oldest submarines in service, anywhere on the world. Used primarily for training. But the boat itself doesn’t matter much. It still is fiendishly difficult to find a submarine that doesn’t want to be found. What really matters are the torpedoes and fire-control systems. They are not the most modern, but more than enough to do the job.

The Chinese navy is big, but not big enough to cover an invasion fleet over 180 km of treacherous seas. Of course they can use civilian ships to carry most of the invasion force. China has plenty of those. However, the difference between navy and civilian ships is that navy ships are designed not to sink as fast as civilian ships. They have usually stronger hulls, more redundant systems and more watertight compartments.

Even an antediluvian submarine will wreak havoc among civilian ships carrying the invasion force. It can easily do that, because the Chinese navy is not capable of finding it fast enough. They will be occupied by staying afloat themselves. Casualties will be horrendous, even before landings begin.

Likewise, the M60 tank is obsolete. That is, when it would have to meet the most modern Chinese tanks in open battle. When dug in well prepared concrete positions near the beach, it is still formidable. The tank may be obsolete; the gun and the fire-control systems are anything but. Taiwan has many prepared tank positions along its beaches, just in case. An M1 Abrams is nice, but their old M60’s will do nicely along the beaches.

And that brings us to the main reason why China definitely will not invade. The One Child policy. You see, the PRC doesn’t have any kind of state welfare. Children have to take care of their parents when they grow old. That’s hard enough as it is with many children, but close to impossible when you only have one son. That son has not only to take care of his own parents but also the parents of his wife. Supposing he can get one. Boys are considered superior to girls in China. Many girls got aborted right away. Hence, there is a huge surplus of men who cannot possibly find a wife. There are simply far too many men in China right now.

Forget about any notion that the Chinese are yearning for democracy. In all of its very long history China never even tried democracy. Yes, it’s somewhat popular among some progressive students. Almost like socialism is popular at Western universities. For most, it’s a fad. Far less popular than socialism at Western universities, as the Chinese government doesn’t allow it. Activists are arrested immediately, and sentenced to long jail terms.

Democracy is completely absent among the majority of the population. They don’t know what it is. Most Chinese have lived under communism all their lives. So did their parents. Western socialism is working very hard to change history. China has already done that. Almost all Chinese believe the lie that it was the CPC (Communist Party of China) that liberated the country from the Japanese. It didn’t. Mao made damn sure to stay out of the way of the Japanese. Let the capitalists handle that. Once the Japanese were defeated, the communists appeared and defeated the (by now) exhausted Chinese army of Chiang Kai-Shek. We know that, but the common man in China does not know that. He believes it was the party that did it. Generally speaking, most Chinese don’t have a lot of problems with the government. A massive uprising is not going to happen. But… an invasion of Taiwan with up to hundreds of thousands of deaths will definitely matter.

The sons have been raised as one child, and as little princes. Many lack any social skills. They will definitely object to becoming cannon fodder. Their parents will join them, as their one son is the only way to secure them in their old age. The CPC has its power firmly secured, but it would be committing suicide if it were to decide to invade Taiwan.

Another problem is the lack of combat experience. The Chinese People’s Liberation Army has none. Last time they tried was during the Sino-Vietnamese War in 1979. Do the math. All veterans from that war have retired. Apart from that, China lost that war.

Why does China not participate in UN peacekeeping missions? Because they don’t know how to do it. They fear loosing face. Their equipment is sub-standard (breaks down very easily); the risk of being humiliated by a bunch of lightly armed but highly experienced veteran nomads is far too big.

Last point: how will the world react? Right now, Germany has a frigate on the way to patrol in the South China Sea. So do the French, with more and bigger ships. The new British aircraft carrier Queen Elizabeth will also make her maiden voyage to the South China Sea. Not because the beaches are lovely and the weather is so nice. That’s in peacetime. Image what those nations would do with a full blown invasion. Plus Australia. And Japan. Taiwan doesn’t even have to defeat an invasion completely. All they have to do is inflict crippling casualties and keep them at bay.

Now have a look at Taiwan. Apart from being heavily fortified, they don’t want to become Chinese communist comrades. Yes, of course there are quislings. But not as many as in Western countries. The Taiwanese know exactly what will happen if China invades. Hence, their intense dislike of communism. Lack of experience is far less of a problem for the Taiwanese military. They have the advantage of defense; all they have to do is make an invasion too costly.

But Taiwan has another trump card: the manufacture of semiconductors. Not that many countries produce semiconductors. Taiwan is one of the biggest producers in the world. The real estate and machinery can be found anywhere, especially within larger cities. It doesn’t produce pollution, so why build such a factory far out in the countryside? Makes a daily commute so much easier.

An invasion will include massive bombardments of Taiwanese infrastructure. It’s very easy to damage or destroy most semiconductor factories. Even if the Chinese were to try to avoid it (they will!), it’s almost inevitable that those factories will be destroyed. Supposing an invasion were to succeed, the Taiwanese will blow those factories up themselves, to deny them to the enemy.

That creates a clear and immanent danger to the USA and every Western nation. Either China takes them over — which would give them a definite advantage close to a monopoly. Or they destroy them. Effectively that’s the same. Either way, the Western military as well as the economy would be devastated without firing a shot. Just about anything you can think of needs semiconductors.

A Chinese invasion of Taiwan would be far worse than Saddam Hussein invading Kuwait. The world can do a couple of days without oil. But we can’t do without semiconductors. If Biden would were to his heels or try to filibuster his way out of it, the US military would immediately react. No matter what Biden or the Democrat Party say. Even if Biden successfully replaces ‘Trump supporters’ with loyal party members. Simply because once Taiwan is taken over by China, all the US military can do is use an Etch-a-Sketch. Anything with semiconductors will be under the control of China.

Of course China will try to take over Taiwan. But not by military action; that would be suicide. In fact, I think it is pretty safe right now for Taiwan to declare real independence. More pressure than applied right now is impossible without declaring war. And that China won’t do.

42 thoughts on “What About Taiwan?”