Before I get into the main topic of this post, I’d like to address the issue of epistemology as it concerns the Wuhan Coronavirus, a.k.a. SARS-CoV-2, a.k.a. COVID-19.

It has become clear over the past eighteen months that something fishy is going on with the COVID-19 hysteria. The current writhings of Dr. Fauci are only the latest in a series of indicators that something massive, dishonest, and baneful is being perpetrated by our political leaders and the permanent administrative apparatus of governments (commonly known as the Deep State). However, the details of what has been done, and the motivations for doing it, remain hidden from public view.

There are certain facts that we ordinary peons may become aware of, but most of our dissident analysis — which the media routinely label “misinformation” — must remain speculation. I read a lot of assertions about the machinations of the Powers That Be concerning the Wuhan Coronavirus, but a closer examination generally reveals that those assertions are not facts, but rather conjectures. Conscientious writers identify their speculations as such, and apply Occam’s Razor to the data at hand to describe why they believe their conjectures to be true. Others simply assert their speculations as fact — the coronavirus represents an attempt by the globalists to enslave the populace, or exterminate 95% of the human race, or bring the whole of the globe under the control of the Zionists, etc. Some of those things may be true, but none has been established as a verifiable fact, not as far as I can determine.

So what facts do we actually know about the origins and purpose of the worldwide Coronamadness?

The data I will present below are simple statistics, drawn from official sources at the website of the Centers for Disease Control (CDC). The manipulation of the data on recorded Corona deaths is a fact: there are enough well-attested instances of bogus, exaggerated, or misattributed instances of death from COVID-19 to establish as fact the inaccuracy of the death counts. Unfortunately, we don’t know the actual, verifiable statistics on such deaths; we can simply be certain that the official statistics have been artificially inflated. The real numbers may be 25%, or 50%, or even an order of magnitude lower than what is shown in government statistics. We just don’t know.

Some dissidents assert that COVID-19 does not actually exist, that the virus described as such is a hoax. I don’t find that assertion credible. There was a large spike in deaths caused by severe respiratory symptoms in March and April of last year. That spike is attested not just by government records, but by numerous anecdotal accounts and alternate sources of data compiled by people who are dissidents and do not subscribe to the Corona hype. Furthermore, there is a large body of writing by microbiologists, virologists, and other experts in the field — many of whom are also dissidents and do not follow the WHO line on the disease — who have studied the virus and analyzed its genetic structure. Therefore, I accept as a premise that the virus commonly known as COVID-19 exists, and that it has been responsible for an undetermined number of deaths.

However, I believe that the official response to Corona is by and large a hoax. This is true not just in the United States, but across the globe. My focus is USA-centric, but as far as I know the same deductions could be applied in all countries infected by what I call the Coronamadness. The populace has been misinformed and massively lied to by political leaders and administrators entrusted with protecting public health. One hopes that someday there will be a public accounting for this gross dereliction of duty, but I’m not holding my breath.

So we know we’ve been lied to, and the truth is something different, but we don’t know exactly what it is. There are, however, official statistical indicators that something distinctly hinky is going on.

I have been wrestling with the CDC’s own data (specifically those of the National Center for Health Statistics, NCHS). There is an intractable issue with the two different datasets I investigated, but I decided to go ahead and publish my analysis after full disclosure of what the issue is.

I wanted a dataset spanning the years 2018-2021 that listed deaths caused by influenza and those caused by COVID-19. Unfortunately, I was only able to find two separate tables, one for 2014-2019 and another preliminary one for 2020-2021. The former includes a column “Influenza and pneumonia (J10-J18)”, while the latter has two columns, one for “Pneumonia Deaths” and another for “Influenza Deaths”. I tried combining the two separate numbers for flu and pneumonia, but that produced a total that was so out of line with seasonal statistics for 2014-2019 that I assumed it was not the relevant figure. I decided to use “influenza and pneumonia” as my flu figures for 2018 and 2019, while using just “influenza” for 2020-2021. I realize that the former two years are therefore probably showing higher numbers than they should be — you can see a drop in the graph from December 2019 to January 2020 — but I can’t find an alternative that would reconcile them. Any reader who is adept enough at navigating the CDC website and finds a full, comprehensive dataset for 2018-2021 is encouraged to send me a link*, after which and I will redo my calculations and post a new graphic.

I imported each dataset (in CSV format) into a Microsoft Access database, filtered out the rows and columns I didn’t need, and combined the result into a single table. I copied a query built on that table into a Microsoft Excel spreadsheet (which has better chart-producing capabilities) to make the following graph. The total Corona deaths are (I assume) grossly overstated, so much so that I had to magnify the flu data eight times to make the two series of comparable magnitude, so that the seasonal variations would be clearly visible: 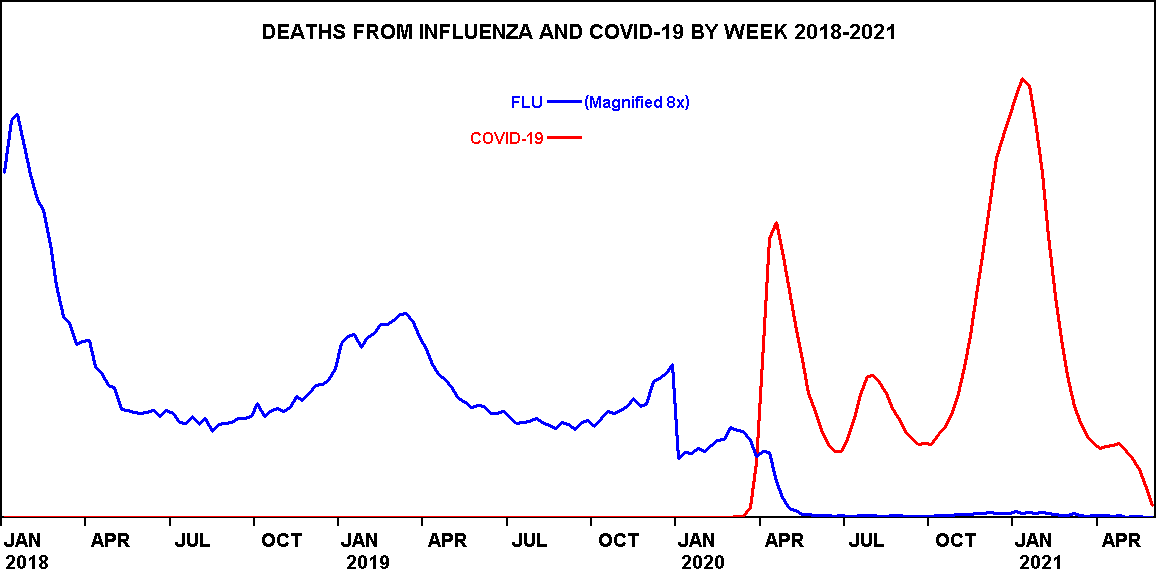 The dataset used to make the graph is included at the bottom of this post in text form.

What might we conclude from examining the two very different datasets represented by the blue and red lines in this graph?

First of all, and most importantly, the influenza line after January 2020 is clearly bogus. I feel confident in asserting this as a fact, because it is statistically impossible that the seasonal flu simply disappeared in the winter — during flu season — coincidentally when COVID-19 was loosed upon the world.

Therefore the seasonal flu continued to kill people during the Corona “pandemic”, but we don’t know how many. Those flu deaths must have been attributed to some other cause or causes.

What do you think was the most likely cause to which those deaths were attributed?

And why were deaths from influenza no longer counted?

We have at least a partial answer to the latter question. It is a fact that the federal government paid hospitals (I think the amount was $13,000) for every COVID death they recorded. That money constituted an enormous incentive for hospitals to test for the Wuhan Coronavirus (using the notoriously inaccurate PCR test). Since they had limited resources and personnel, they ordered their staff to stop testing for influenza. I don’t know if this is universally true, but it is well-attested in multiple instances. Hospitals and nursing homes stopped testing for influenza when patients died, so the seasonal flu simply disappeared.

The above description concerns simple facts — explanations and deductions drawn from data that are reliable enough to be asserted as factual.

Any further conclusions — about how the disappearance of the flu was coordinated, and how high up the chain of authority the decision to disappear it went — would involve speculation and conjecture, which I will forgo for the time being.

I will say this, however: the current feeding frenzy over Dr. Anthony Fauci is misplaced. Yes, I know the chum is in the water, so the sharks are bound to gather. And I know the esteemed doctor played a pivotal role in the collusion with China over gain-of-function research, and the disbursement of public money to fund it. But, really, he’s just a minion — a toady for much more powerful people, some of whom are readily identifiable. He slavishly did their bidding, but he is expendable, and is now being thrown under the bus to protect his betters.

At least that’s my take.

Weekly Deaths From Influenza and COVID-19

19 thoughts on “The Strange Case of the Disappearing Flu”