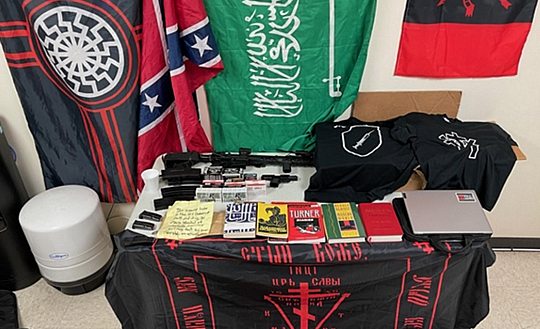 Remember the Confederate flags carried by marchers at the “Unite the Right” rally in Charlottesville in August of 2017? Some of those flags looked brand new — you could see they had neat rectangular creases, as if they had just been pulled from the box and unfolded. Even though the marchers at the rally had been “white supremacists” all their lives, some of them had evidently never unfurled or displayed a Confederate flag until that day.

I was reminded of that occasion by last night’s news report on the arrest of a domestic terrorist in Texas. Last Friday a young man named Coleman Thomas Blevins was arrested in Kerr County by state and local law enforcement, the FBI, and the U.S. Secret Service. Mr. Blevins is alleged to have planned a mass shooting attack at a Walmart store, and has been charged with making a “terroristic threat to create public fear of serious bodily injury.” The authorities confiscated “white supremacist” materials when searching his home after his arrest. (For more details, see this CBS News article.)

As you can see from the photo at the top of this post (see the article for a larger version), one of the confiscated items was a green flag with a sword and the Arabic script of the shahada in white. Casual viewers might assume that this is a jihad terrorist flag, but it is not — it is the flag of the Kingdom of Saudi Arabia (seen from the reverse side).

One assumes that when Mr. Blevins developed an admiration for the mujahideen of the Islamic State, he hurried on down to Shahids ’R’ Us with the intention of picking up an ISIS flag. But they were fresh out, unfortunately, so he grabbed a Saudi flag instead, which looks similar, except for the color and the sword.

The rayat, or black flag of jihad, which is sometimes used by the Islamic State, looks like this:

It is flown by mujahideen during operations in Dar al-Harb, the House of War, where the rule of Islam has yet to be established and the jihad is still being fought. The exact same design with the colors inverted — black on white — is flown in Dar al-Islam after the jihad has been victorious and the rule of Shariah imposed on the conquered population.

Mujahideen for ISIS are more often seen carrying the archaic version of the rayat:

No self-respecting Islamic terrorist would carry the Saudi flag in his jihad, because the princes of the House of Saud are viewed as enemies of Islam. One may assume that Mr. Blevins had not yet made contact with any actual mujahideen, who would have swiftly corrected his inadvertent error.

Like some of the flags at the Charlottesville rally, Mr. Blevins’ Saudi flag bears neat rectangular creases, as if it had just been taken out of its box, possibly by the FBI agents who arranged it for the photo.

I wonder if the embassy of Saudi Arabia has weighed in on this unseemly use of their country’s flag. It seems unlikely that they are pleased by it.