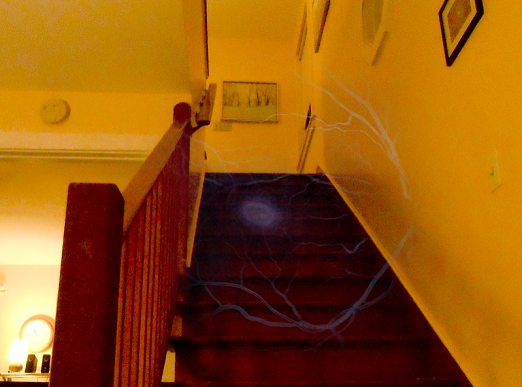 Most readers will be aware that I suffer from choroidal neovascularization — wet macular degeneration — in my left eye. Like the current U.S. government, the disease is progressive. Which mean that it gets worse over time — also like the U.S. government.

I was first diagnosed with the condition a little more than eight years ago. Last year it flared up again just after the “pandemic” began. The retinal specialist’s office closed down for a couple of weeks. Since we were asked not to visit healthcare facilities unless absolutely necessary, I put off going in for treatment until a month after the new symptoms appeared. That was a mistake, of course: it allowed the new growth of blood vessels to do more damage than it might have if I had had the injection promptly. If I had it to do over again, I’d say, “Screw the CDC — I’m going in.”

I’ve written the following account for my own benefit. When I describe something as distressing as this in a detailed, detached, clinical fashion, I find it helps me cope with the awfulness of it. Putting it into words seems to allow my psyche to contain it better.

This essay has nothing to do with the mission of this blog, and may be safely skipped. However, anyone who is curious about macular degeneration, or who suffers from it himself, may be interested in my descriptions.

The image at the top of this post is a simulation of what I might see in the visual field of my left eye as I begin to ascend the stairs to the Eyrie here at Schloss Bodissey. I’ve exaggerated the effect a little so that you can see it clearly, but this is basically what it looks like at night after my eye has had a bad day. The blob in the center is the scar left by the growth of a “frond” of new blood vessels in the choroid behind the retina. When that happens, fluid leaks from the blood vessels into the macula, damaging it. It can also push the dark pigment from the choroid into the retina, which darkens the field of vision at that location. That happened to me in March of 2013, and it took more than five years for the pigment to migrate to the periphery of my vision and be consumed by macrophages.

The smaller, lighter spot in the center of the oblong blob is the location where the original eruption of blood vessels first appeared, causing a bump that severely distorted my vision just to the right and below the fovea (from my perspective — since the brain inverts the retinal image, the bump was actually above and to the left). Fortunately, the Avastin injections that dried up those new vessels also made the bump shrink, so that I no longer see any topological distortion to speak of.

Because the damage to the macula did not quite overlap the fovea, I didn’t experience severe problems with focusing in that eye. However, last year’s flare-up expanded the trouble zone upwards and to the left. The top left edge of the blob in my simulation is right on the fovea, which means that my left eye now has a great deal of trouble resolving the focus in the central area of the macula.

The past year has also brought new symptoms, ones that I hadn’t seen before. The pattern of larger blood vessels in the eye gradually became visible under certain circumstances. To get a snapshot like the one at the top of this post, I would have to close my eyes for a half-second or so and then open them again. The layout of the vascular network in my left eye then appears briefly before fading out again. The central blob is initially quite bright, then fades after a moment, but never disappears entirely.

That’s on a bad day. On a good day I hardly notice any of that at all.

I also tend to see a wavy, irregular reticulated pattern throughout the visual field in that eye. It may be the interweaving of the smallest blood vessels in the retina, but it’s hard to tell.

The upshot of all this is that the visual acuity in my left eye has been significantly reduced. On a bad day, I can’t really resolve a clear, focused image at the fovea, and the area surrounding it is now also compromised.

Eight years ago, when the bump was causing such agonizing distortion, I contrived a patch for my left eye that could be fitted over the outside of my glasses. I made it from thick brown paper cut from the bottom of a Whole Foods grocery bag. Wearing it while at the screen allowed me to continue working. Late that summer, when the bump had mostly subsided, I was able to take it off.

A few months ago, when my new symptoms were at their worst, I got out that old patch and reattached it to my glasses. It was already in fairly bad shape from having been used for several months in 2013, and it didn’t hold up very well. Last week I used the same pattern to make a new patch from thicker, more rigid dark grey paper cut from a document folder: 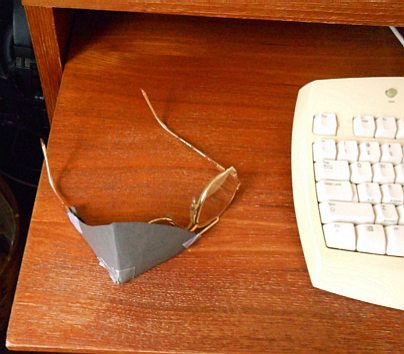 I have two pairs of monofocal glasses that I use when working at the computer screen. I keep the patch on one pair, and use that on my bad days. On a good day I can use the other pair.

When the left eye is unable to resolve a focused image in the fovea, it causes significant problems as the brain tries to create a binocular image. My right eye is in good shape, and I can see a clear, sharp 20/20 image with it when I have my glasses on. However, when my left eye is in bad shape, the overall binocular image never comes into full focus — it looks blurry.

That’s on a bad day. Today happens to be a good day. I only wore the patch briefly this morning, before I realized that I could do without it. Right now the image of this screen is fairly sharp and well-resolved.

The retinologist has increased the frequency of my injections to every thirty days, in hopes that it might effect a more lasting improvement. So in six months’ time, if I’m fortunate, I may have better news to report.

Writing all of the above reminded me of a poem by Pattiann Rogers that I first encountered almost exactly forty years ago. I admire the way she interweaves the anatomy and physiology of the eye with the soul’s apprehension of visual beauty:

Whatever enters the eye — shade of ash leaf,
Torn web dangling, movement of ice
Over the canyon edge — enters only
As the light of itself.
It travels through the clear jelly
Of the vitreo, turning once like the roll
Of a fish in deep water, causing a shimmer
In that thimbleful of cells waiting,
Then proceeds as a quiver on a dark purple thread
To pass from life into recognition.

The trick is to perceive glory
When its light enters the eye,
To recognize its penetration of the lens
Whether it comes like the sudden crack
Of glass shot or the needle in the center
Of the hailstone, whether it appears like the slow
Parting of fog by steady trees or the flashing
Of piranha at their prey.

How easily it could go unnoticed
Existing unseen as that line initiating
The distinction of all things.
It must be called by name
Whether it dives with triple wings of gold
Before the optic nerve or presses itself
In black fins against the retina
Or rises in its inversion like a fish
Breaking into sky.

Watching on this hillside tonight,
I want to know how to see
And bear witness.