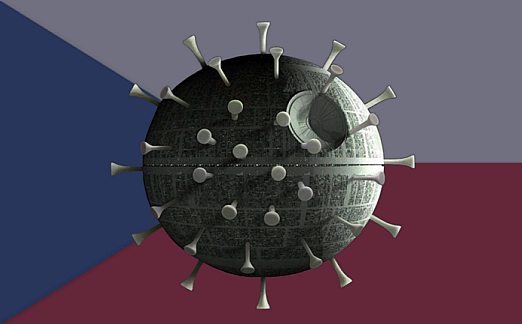 The incident recorded in the video below took place a week ago in the town of Uherské Hradiště in Moravia, Czechia. In it you’ll see the municipal police take down a man who was not wearing a mask, as mandated by COVID-19 emergency regulations. As I understand it, the municipal police are a lesser police force, distinct from police who conduct criminal investigations.

Initial reports on social media alleged that the 3-year-old son of the mask scofflaw was left unattended at the scene after his father was carted off to the police station. However, the official statement in the article below seems to contradict that assertion.

Many thanks to Margita for the translation, and to Vlad Tepes and RAIR Foundation for the subtitling:

The following article about the incident from Slovácký deník was also translated by Margita:

VIDEO: Strong-arm tactics against a man without a mask. Investigations being carried out to assess whether the police action was proportionate

Two officers of the municipal police who, on Wednesday March 10 after 4:30 in the afternoon on Havlícková Street, Uherské Hradiště, cracked down on a 40-year-old man who refused to put on a mask or respirator, have been suspended from duty. The emotionally charged situation captured on the video of a mobile phone was watched by the man’s three-year-old son.

News of the event spread via social networks on Wednesday night, attracting the attention of the public and unleashing a heated discussion as to whether the police response was appropriate.

The conflict occurred as a two-member patrol of the municipal police in Uherské Hradiště was proceeding along Havlícková Street. The transgression was allegedly committed by a man born in 1980 who was accompanied by a child.

“He was warned by police officers of the obligation to have his airways covered while in town by a respirator or a mask,” said Jan Pášma, a spokesman for the town hall in Uherské Hradiště.

According to him, the man replied that he would not cover his mouth because he was outside and wanted to breathe fresh air.

“He repeatedly refused to prove his identity. He then took his child in his arms and tried to walk away. For that reason the police officer blocked his path,” Jan Pášma described the situation.

But the forty-year-old man did not react and began to leave the scene. The officers immediately detained him physically and took him to a nearby city police building.

The mayor of Uherské Hradiště, Stanislav Blaha, later rejected speculations that after the man was taken away by the police, the child remained unnoticed at the scene of the struggle.

“He was under the supervision of a second patrol of the municipal police which had arrived on the scene and within a few minutes took the child to the city police station to see his father,” the mayor said.

Through his lawyer Filip Petráš, the man, M. Z., described his unpleasant experience with the police quite differently.

“He was with his three-year-old son on the way from a health food shop to his car, parked about 30-50 meters from the store. Whilst shopping he had worn his protective equipment properly, as did his son. After leaving the store, they took off their protective equipment and headed for the parked car. There were no other people near them at that time,” said Filip Petráš.

However, the father and son were stopped by a city police patrol and alerted to the lack of mouth and nose protection. Mr. M. Z. replied that he knew about it, but that he was just on his way to the car and since there were no other people in the area, he wanted to breathe fresh air.

“He was then asked by the police patrol to identify himself, after which he stated that he would just put his child in the car and then talk to the patrol,” the lawyer specified.

At that moment the officers used coercive measures and wrestled the man to the ground in the presence of his three-year-old son.

“Mr. M.Z. was physically insulted, despite being neither aggressive nor resisting. After that he was taken to the police station by a municipal police patrol” Filip Petráš described the situation.

At no time was the man informed about what was happening to his three-year-old son.

“He was left alone on the street. Subsequently, he was brought to the police station by a shop assistant from the bakery. After his arrival, he was locked up in a cell together with M. Z.,” the lawyer added.

Was the procedure disproportionate to the situation? Investigations are continuing

The mayor of Uherské Hradiště, Stanislav Blaha (ODS), assessed the intervention of the police officers as disproportionate to the given situation and insensitive. He ordered an investigation of the incident by the Police of the Czech Republic.

“From a criminal and legal point of view, I have today filed a motion with the Police of the Czech Republic to investigate the incident. From an employment point of view, the matter will be decided by us after a thorough evaluation of the situation. At this moment, both officers are suspended from duty. I consider their intervention, especially given the presence of a small child, to be insensitive from a humane point of view,” Stanislav Blaha said, apologising to everyone who was in any way affected by the police intervention, saying that this incident tarnished people’s trust in the municipal police.

The commander of the municipal police of Uherské Hradiště, Vlastimil Pauřík, supported the mayor’s apology.

“The police inaccurately assessed the social danger of the offense and in no way should they have needed to pin the man to the ground in front of his child,” said Vlastimil Pauřík.

According to him, the two police officers have been working for the municipal police in Uherské Hradiště for two and four years respectively.

The mayor also pointed out that the Extraordinary Measures of the Ministry of Health are still in force at present.

“Everyone is obliged to comply with this regulation and the patrol acted correctly by informing the man about this obligation. From the point of view of the legitimacy of the intervention, the police officers did not make a mistake,” added Stanislav Blaha.

Michal Dvouletý, a representative of the group Private Businesses Free Independents for Hradiště, is critical.

“I confess that for me, as a father of small children, the published footage is a nightmare. That is why I do not intend to accept such practices.”

“It is unthinkable that anyone should end up face down on the ground in front of his three-year-old son and almost strangled by a police officer, all because of an unattached respirator.” he added.