When I was about nine years old I liked to read the Hardy Boys mystery books. The first in the series was published in the late 1920s, and the publisher continued putting out titles until long after I was grown up.

In the late 1950s, as the cultural trend now known as political correctness was just getting started, the publishers ordered a rewrite of the older Hardy Boys books. To be fair, it was only partially for PC reasons. Yes, it’s true that the books’ depictions of negroes in the ’20s and ’30s tended towards the “sho nuff” and “dat sure am good” sort of stereotypes. But there were also rumble seats and roadsters and other dated cultural artifacts that had to be revised in order to make sense to the boomer generation. Needless to say, the new versions were less interesting than the originals. Boys like me held onto their ragged old copies rather than buy the new ones, and fortunately my school library had a lot of the old ones — that was in the days before libraries purged their collections for politically correct reasons.

My favorite books, however, were those by the immortal Dr. Seuss. His early works — before about 1957 — were (and are) timelessly superb. My mother thoughtfully preserved my Dr. Seuss collection, so that when the future Baron came along, I only had to acquire the newer books (some of them — a lot of the later ones are not at all interesting). Reading the old books to him when he was little reminded me of how wonderful they were.

About two-thirds of our combined Dr. Seuss collection here in Schloss Bodissey consists of my old books, most of them worn and tattered and taped together after being well-loved by two generations of kids. Some of the titles from the mid to late ’50s came from the first printing.

Considering what can be found in those old books, it was obvious that Dr. Seuss would someday have to be cancelled. When I saw the list of six titles that were withdrawn from publication a few days ago, I realized that I had four of them on the bookshelf right here in the Eyrie — McElligot’s Pool, If I Ran the Zoo, Scrambled Eggs Super, and On Beyond Zebra. According to various news stories, they are now available on Amazon only as “used” or “collectible”, with prices ranging from about $100 to as much as $2,500. If I wanted to cash out, I could make a fair amount of money on them. But it’s not worth it — I’d rather have the books.

Out of curiosity, I went through those four titles to see what racial heresies they contained to earn the ire of the Woke mob. If I Ran the Zoo was the most obvious — the image at the top of this post is taken from it. Those native bearers are undeniably sambos, and we can’t have that, now, can we?

In addition there was this one: Yep, they’re definitely slants. Now, maybe if he had dressed them in business suits like real Chinese he could have skated by. Better yet, to make it realistic, he could have had the Chinese businessmen riding on top of the cage while the American boy carried it.

And then there’s the sheikh from the Desert of Zind. I’m not sure if he counts as a racial stereotype, but he kind of looks like an Arab, and he’s riding something that looks vaguely like a camel.

The sheikh clearly needs to be cancelled, too.

I couldn’t remember anything racist from McElligot’s Pool, so I paged through it trying to find the offending image. Sure enough, there was this: 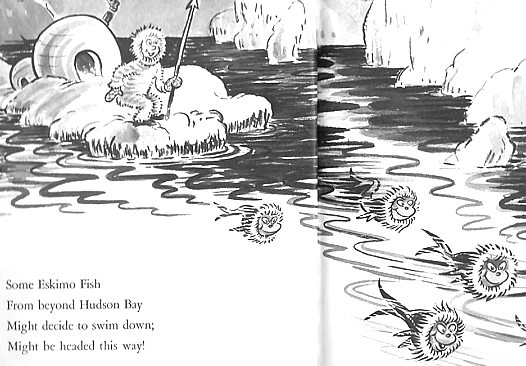 Not only does the fellow at the top live in an igloo (with a stovepipe, no less), but the fish with the little furry parkas are Eskimo fish. Oh, the humanity!

It was much harder to discern why On Beyond Zebra had roused the wrath of the Wokistas. The only possible candidate I could see was the Nazzim of Bazzim: He doesn’t seem to be a particular stereotype. But he represents the imaginary letter “spazz”, which is so close to a derogatory epithet that it may have been enough to warrant his cancellation.

And Scrambled Eggs Super was even harder to figure out. The fellow at the right appears twice in the book. His name is Ali — is that enough to get him cancelled?

He’s not a stereotypical Arab, but more like a Turk or a Persian. Coupled with his name, that may be sufficient to merit the censure of the Grand Inquisitor.

I can’t find anything else in the book that could be remotely considered WAYCIST.

In an attempt to appease the Woke Brigades, Dr. Seuss Enterprises — which owns the rights to the late author’s books — has withdrawn six books from publication. But that’s not enough to satisfy Wokedom, which will settle for nothing less than the complete cancellation of Dr. Seuss and the removal of his entire oeuvre from the public space. The 20th century must be cleansed of his stain.

And this is only because of the “racist” images. What about sexism, the patriarchy, ableism, and all the rest of the PC shibboleths? I’m certain that there are “sexist” items amidst all the bric-à-brac depicted in The Cat in the Hat and The Cat in the Hat Comes Back.

Then there’s the cruelty to animals depicted in If I Ran the Circus. And what about the ending in Thidwick the Big-Hearted Moose? The freeloading animals that Thidwick discards when he sheds his antlers wind up as stuffed trophies on the walls of the big game hunters! How could we possibly allow children to read such an abomination?

In The King’s Stilts the evil Lord Droon falsely accuses Eric the pageboy of having the measles, and forces him into involuntary quarantine. But Eric escapes from quarantine — what kind of example is that for the impressionable minds of children during this, the Great Pandemic?

And what about the environmental damage caused by the oobleck in Bartholomew and the Oobleck?

I could go on, but you get the idea.

Dr. Seuss had a long career drawing illustrations and cartoons long before he started doing children’s books. I recommend a collection entitled The Tough Coughs As He Ploughs the Dough, which contains works published in various periodicals during the 1920s and ’30s. It’s a little bit racy here and there, and quite politically incorrect. You might want to acquire a copy, if any are still available.

For all I know, Dr. Seuss may have lived long enough to have peopled his later books with exquisitely PC brown characters; I’m not familiar with most of his work from the ’70s and ’80s. We know by The Lorax (which I do not own a copy of) that he became environmentally correct in the ’70s. If he had survived until the dismal Third Millennium, he might well have written about children with two mommies, or featured a trans heroine (heroinx?) in his writings.

But we’ll always have King Birtram and Thidwick and Bartholomew Cubbins. Even if none of those classics is ever published again, the extant copies will be treasured and taped together and passed around discreetly as samizdat in this our latter-day dystopia.

And children will love them.

15 thoughts on “The Cancelling of Dr. Seuss”