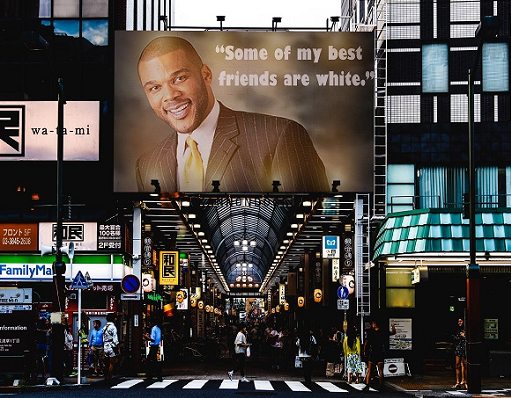 Most readers will remember the “It’s OK to be White” poster campaign that has popped up from time to time around the country over the last few years. It was (and is) a brilliant move by subversive guerillas in the information war. They troll the Social Justice Warriors with an innocuous slogan that causes consternation and outrage, provokes billions of bytes’ worth of angry posts on social media, and ties up law enforcement resources as police are ordered to investigate the posters as “hate crimes”.

And those racial theatrics produce a clarifying moment for the culture at large. All the outrage and vitriol and legal actions demonstrate in a most emphatic manner that it is not OK to be white. That my whiteness — an inherent characteristic that I am unable to change — makes me a doubleplus ungood creature who cannot redeem himself, no matter how much he apologizes and debases himself and grovels at the feet of the Brown Ascendancy.

Any white person who hasn’t already drunk the Critical Race Theory kool-aid must surely have noticed by now that there is nothing he can do to appease the Woke brigades. Extermination is the only solution to the problem of “whiteness”.

The technique employed in the “It’s OK to be White” posters might be termed an inversion. It takes a common trope from the dominant culture and turns it around to create an unexpected message. And the genius of this particular idea is that it makes the message as inoffensive as possible. It’s not “White is Beautiful” or anything of that nature, which would have been an exact inversion. Instead it is mild and reasonable, which means that the inevitable hysterical response highlights the deranged animosity motivating the shrill harpies who dominate public discourse.

I was thinking about all this while I was travelling last week, and it occurred to me that we need more inversions of the Woke paradigm. Mild, harmless images and words guaranteed to make the SJWs apoplectic. The billboard at the top of this post is an example of what I mean — a kind, friendly, attractive black person who has white people as friends. What could be more racist and hateful than that?

If we were to put up a real billboard with the message, we obviously couldn’t use that particular photo of Tyler Perry, who is apparently a famous and very rich actor. I seriously doubt he would allow himself to be featured in any “white supremacist” propaganda. But surely there must be some non-Woke black people who would get the point and enjoy the joke. Walter Williams comes to mind, but he is, alas, no longer with us.

Just think what the reaction would be if billboards like that began popping up here and there in American cities. Mind you, it might be difficult to actually get any of them up. Even if a billboard company were inattentive enough to allow the message to appear, the local franchise of Woke Central would immediately call down the wrath of the police, the mayor, the city council, state legislators, and possibly the U.S. Congress against the WAYCIST who bought and paid for the space.

But oh! How satisfying it would be if even one of them appeared, however briefly. It would dominate the local news, and maybe even spread to the national media. Congressional hearings would be convened. President Biden (or Harris) would denounce it.

And when the person behind the billboard was outed and doxxed, he would have to flee to Patagonia and live under an assumed name.

Such are the parlous times in which we live. It’s clear we need more inversion. If readers can think of any other creative ideas, I’ll do my best to photoshop them.

18 thoughts on “Inverting and Subverting the Woke Paradigm”