Our Dutch correspondent H. Numan sends this follow-up to his previous report on the recent elections in The Netherlands. 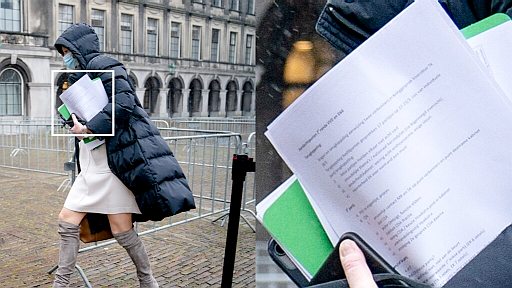 Gaffe in The Hague

We had elections; I reported that last week. Now all we need is a new cabinet. That means a lot of negotiating before anything can happen. We’re off to a very good start. You’re not going to believe this. A blunder of national proportions occurred last week!

A pair of scouts (‘verkenners’; not an official title) were appointed to test the waters. The team was Mrs. Ollongren (D66) and Mrs. Jorritsma (VVD). They finished a meeting with Premier Rutte in ‘The Tower’ (‘het torentje’; the office of the PM next to the Parliament), and walked in the courtyard. There they were interviewed by journalists. So far, nothing unusual. Here it comes!

Mrs. Jorritsma was carrying a stack of notes face up towards the journalists. They quickly made photos of it, and rushed off to see if they could read it. There wasn’t a lot visible, but it clearly showed: ‘Mr. Pieter Omtzigt — alternative position’. Oopsie!

Right now this is headline news in The Netherlands. Pieter Omtzigt is the most popular politician of the moment by far. After this gaffe a poll showed his popularity soaring. Had elections been held, he would easily gotten 23 seats by himself if he set up a new party.

Of course everybody denies everything. The PM lied said the position of Mr. Omtzigt was not discussed, or even on the agenda. Oopsie! We have photographic copies of that agenda. The scouts have been, not surprisingly, fired.

There are no consequences, of course. It’s just that everybody is at least sniggering, if not outright laughing. It’s a rare opportunity to see a bunch of politicians with their pants down in public. Or with so much egg on their faces. Ollongren and Jorritsma are hung out to dry. If they can swim, fine. If not, no big loss.

Annemarie Jorritsma is already a semi-retired politician with a black spot. She was a minister, at this moment she is mayor of Almere. Where she build an illegal heat exchange system in her house. A couple of years ago that caused a bit of a problem, which was quietly defused. The reason for the outcry was she had long pipes drilled into the ground, without permissions and contrary to both local and national law. Rules for thee, not for me. Probably she’ll retire after this incident has blown over.

Kajsa Ollongren is a different story. She is of mixed Dutch and Swedish descent. She holds a Swedish noble title (in Dutch: jonkvrouw — squire, female version) which was accepted into the Dutch nobility. Number two who managed that in recent years. The other one was an Argentinean women digging for gold. Ollongren is a current minister, and likely to save her political skin.

So, who is this popular politician Pieter Omtzigt? He is one of the top politicians of the Christian Democrats. Their enfant terrible. He is an ambitious, hardworking and — extremely rare — an honest politician. He investigates lots of shady affairs, for example MH370, Joris Demmink and many other cases that his party would rather not have investigated. At least, not too closely. The current cabinet resigned because of his investigation of a tax scandal. That is probably the reason why his party wants his head on a platter.

A few months ago he tried to become leader of the CDA party. His opponent was Hugo de Jonge. That’s a competition between a racehorse and a nag (with very fancy horseshoes). The nag, of course, won. It is almost certain that the (internal party) election was rigged.

Pieter was already very popular with the electorate, not just within the CDA elite. Electing him as party leader would almost certainly have recovered the CDA position as the dominant party. Or at least made it the second-largest party, after the VVD. Party leadership preferred Hugo the Clown, with the guarantee of losing the elections. However, Hugo de Jonge’s position as chairman was untenable. He blundered his way through the corona crisis, not a good thing for a health minister. After he babbled to a newspaper “Yes, once in a while, he did use cocaine. Just not a lot. Actually, it was not really cocaine but ketamine,” he was replaced with Wopke Hoekstra. Wopke is a political nonentity who does exactly what he is told. You want to see what a yes-man looks like? Look at Wopke Hoekstra.

Let that sink in for a moment. The CDA has a superstar that can bring them back to the number one spot. First they preferred a bumbling clown (Hugo de Jonge); next they arranged for a yes-man. Knowing full well de Jonge would cost them dearly and Hoekstra only slightly less. Please tell me why. I can’t come up with decent answers. Only answers I’d like to avoid. Now you understand why we Dutch have a very dim view about politics and political backroom deals?

Almost every time Omtzigt works on an investigation, he is taken off the case. Usually for ‘reasons of national interest’. I know it ain’t fun to work for a party where the knives are openly out to get you. That took its toll: Pieter is now ill at home. He suffered from a nervous breakdown and is overworked.

His CDA colleagues gleefully tweet far and wide about his condition. Especially that he can’t concentrate, cries a lot and has violent outbursts. Yeah, a very considerate lot, them Christians. Full of envy, spite and hate compassion!

So the note that Omtzigt needs an alternative position is not a joke. Problem is: where? He can’t become special envoy to Patagonia, obviously. The king has a ranch there. What about ambassador to Nova Zembla? Or assign him to be environmental commissioner in Kyrgyzstan?

Wopke Hoekstra hastened to denounce those rumors. “The position of Mr. Omtzigt has not been debated, nor will it.” Yeah, and if pigs have wings… “I would be the first to know about it, and haven’t heard anything.” Indeed, will no one rid me of this turbulent politician?

Now that you have an idea about who Pieter Omtzigt is, let’s look at what he is not. Yes, in a party that steadily moves to the left, he represents the conservative wing. However, I have never heard him contradict party policy. He never said, at least not in public, that he would prefer to work with any conservative party. Let alone with which parties. He never supported the PVV or Wilders. Or Baudet, or any other conservative politician. He is less progressive than his party wants, but that doesn’t make him automatically a staunch conservative.

However, in the CDA he is by far the most likely to break the anti-Wilders boycott. The CDA is a merger of two fairly progressive Protestant parties with the fairly conservative Catholic party. Omtzigt is a conservative Catholic, and therefore automatically in the minority group of his party. For that reason, the CDA goes to extremes to keep him under control. It is possible that he might break the boycott, and we can’t have that. Might, mind you. It’s not assured, and so far he hasn’t given any reason that he wants to do that. However, the CDA doesn’t want to take the risk. They’d rather be a small progressive party than the biggest conservative party. Q.E.D.

I wish him well, and hope he’s back in the saddle soon.

One thought on “Gaffe in The Hague”