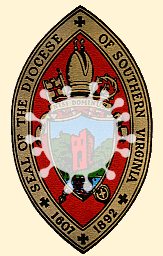 The Episcopal Diocese of Southern Virginia has just released its regulations protocols for the “safe re-gathering” of churches.

After you read the whole thing — and you may want to take an antiemetic before doing so — see if you can think of a reason why any sane person would want to attend a Christian worship service under these rules. Because I sure can’t.

How could anyone come with joy to meet the Lord in such a church?

Where is there any indication in this document that worshippers would be celebrating the presence of God in their midst?

Where is there any indication that the diocesan leadership even believes in God?

The opening of one particular sentence stands out for me: “Educate all congregants to assure compliance…”

This is the essence of the Coronamadness: assuring compliance. Early on in the pandemic I said that the unquestioning wearing of masks was a sign that we had become a nation of compliant drones. A year later it’s clear that only a compliant drone would enter an Episcopal church in the Diocese of Southern Virginia.

Fortunately, I am still attending services with a tiny dissident congregation that meets in a private residence. We sing, pass the peace, take communion, and don’t wear masks. And eat lunch afterwards. We’re non-compliant.

Below are the Protocols of the Elders of the Diocese of Southern Virginia.

With great joy, we are heartened to see that percent positivity rates for the Commonwealth of Virginia have remained at or below 8 percent for 14 days or more. In consultation with the Health Advisory Panel, the Bishop is pleased to lift the restriction on indoor in-person worship and other gatherings. The following protocols remain in effect:

10 thoughts on “An Empty Husk Whence the Spirit Has Fled”