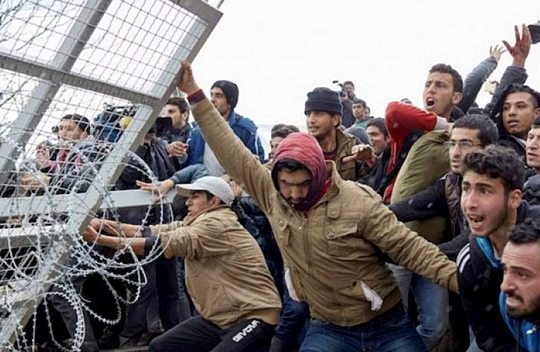 The following article reports on the influx of Islamic terrorism that entered Germany along with the “refugees” who were welcomed into the country beginning in the summer of 2015.

Many thanks to Hellequin GB for translating this piece from Politically Incorrect:

New Figures From the Attorney General: Over 3,000 Islamist terrorist court proceedings since the border opened in 2015

At the request of the author, the Federal Public Prosecutor confirmed 381 new legal proceedings relating to Islamist terrorism for the past year. Despite the “fight against the right”, which has been elevated to a state doctrine under the Merkel government, the current figures clearly show that the security risk posed by radical Islam is the most threatening danger for the citizens of this country and the fundamental free democratic order.

Despite explicit inquiries, the GBA failed to determine the exact number of legal proceedings against terrorists in the area of left and right-wing extremism.

“One does not want to draw any conclusions about the surveillance intensity of these scenes,” is the incomprehensible argument of the press office.

This action is also strange, since after a parliamentary request from the opposition, the two figures have to be released and thus become public.

We are now in the sixth year of Merkel’s “opening of the border”, with the media language police trying to make this term largely taboo. Whatever the politically correct name, September 13, 2015 will go down in German history books as the day on which Angela Merkel forbade the Federal Police, formerly the Federal Border Guard, to protect Germany’s borders, the identity of the country, the social order, and particularly to protect the security of citizens.

The analysis of the terror figures for the past few years also says more about the actual security situation in the country than the police crime statistics (PKS) from [Minister of the Interior Horst] Seehofer, which are suspected of being manipulated.

The course of the flow of refugees and their highly problematic proportion of Islamists and terrorists can thus be read directly from the Federal Prosecutor’s figures. Accordingly, the Federal Prosecutor has initiated a total of 3,026 Islamist terror-related court proceedings since 2015. An almost unbelievable number. In addition, if you consider that, for example, a case against a five-person ISIS cell in Berlin is included in the statistics of terrorist cases.

According to estimates by security experts, the number of Islamic terrorists in Germany has long since reached five-digit levels.

What follows are indisputable facts. These were communicated to the author upon request by the press office of the Attorney General in Karlsruhe:

The total number of Islamist terror-related legal proceedings by the GBA has thus added up to 3,026 terror cases since 2015.

The open borders, the federal government’s migration agenda, the loss of control and the failure of the state, such as the non-deportation of Islamists and terrorist suspects, have led to a dramatic deterioration in the security situation. The security authorities are expecting new Islamist terrorist attacks at any time. This does not represent any short-term collateral damage to refugee policy, to put it cynically, but will become a burden for the next generation. A look at France, England and Belgium gives rise to fears that the escalation will happen soon and continue.

Meanwhile, federal ministers such as [Minister of Foreign Affairs] Heiko Maas can spread false news publicly and without contradiction: “There is no connection, no single verifiable connection between terrorism and the refugees — except perhaps one: namely that the refugees are fleeing from the same people in Syria who are responsible for the attacks in Paris,” the then-Federal Minister of Justice said in the ARD morning magazine.

While AfD members are accused of quotations from their teenage years, Mr. Maas has never had to justify, apologize or even resign for this deliberate fake news.

A look at the press releases of the GBA is enough to see that terrorists from Syria, Iraq and Afghanistan have been exposed in large numbers as terrorist suspects in Germany.

War criminals instead of “refugees”

Let’s take a current press release from the Federal Prosecutor’s Office from January 18, 2021, which is freely accessible to every citizen at generalbundesanwalt.de. There it says:

Charges were brought against an alleged member and an alleged supporter of the foreign terrorist group Jabhat al-Nusra (JaN) on charges of war crimes, among other things.

The accused are sufficiently suspected to have jointly killed a person who is to be protected under international humanitarian law in connection with a non-international armed conflict (Section 8 (1) No. 1 VStGB, Section 211 (2) Var. 4 StGB).

Together with the other parties involved, they took the prisoner, who was bound and already severely abused, to the place of execution. Khedr AK, armed with a rapid fire rifle, took over the guarding of the prisoner and the screening of the execution. Sami AS, in turn, filmed the shooting in accordance with the previous plan and commented on the recording in a glorifying manner. He then made the recording available to the terrorist organization Jabhat al-Nusra for their propaganda work.

The “refugees in need” announced to us by the mainstream media turned out to be brutal murderers and war criminals. How high the total number of unreported cases in this epoch-making migration flow, however, remains unknown.

The AfD parliamentary group tries to get reliable numbers through numerous inquiries, but the largest opposition party in the Bundestag is thwarted by the federal government in a brazen, almost anti-democratic way. If you have high blood pressure, it is better not to read through the printed matter of the German Bundestag 19/25939 . This document is very informative for all die-hard people. In particular, with what outrageous justifications the non-response to parliamentary questions is stifled:

The question cannot be answered because of the unreasonable effort involved. […] Due to the distribution of competencies, the BAMF (Federal Office for Migration and Refugees) cannot provide any information on the current residence status of the named group of people… The further answer cannot be given openly for reasons of public interest. From the point of view of the state’s welfare, they contain information that requires protection, which is obtained in connection with intelligence-gathering methods and procedures of the BfV (Federal Office for the Protection of the Constitution) under the influence of cooperation with other authorities and other intelligence services in the context of the performance of tasks.

Nevertheless, numbers and facts are definitely mentioned in the document, which, however, underpin the destabilization of Germany.

The following assessment from the Federal Ministry of the Interior, which can also be read in the printed matter, should actually be read out by the President of the Bundestag before every Bundestag session so that MPs are reminded of the consequences of their disastrous policies:

The threat to Germany remains at a high level. Germany continues to be in the immediate target spectrum of international terrorist organizations. A persistently high risk of jihadist-motivated acts of violence can also be expected in 2021.