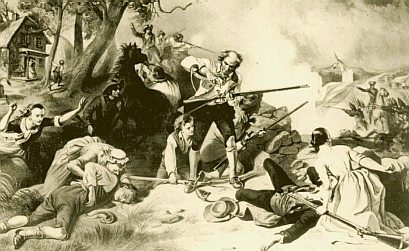 An apocryphal story about Benjamin Franklin relates his response when, at the end of the Constitutional Convention in 1787, he was asked what form of government the new country would have. He said: “A republic, if you can keep it.”

The amazing thing is that we have kept it for as long as we have. Mind you, 233 years after the Convention the Republic is in tatters — just barely hanging on by a thread. It has been deteriorating steadily since at least 1913. If events in the United States of America continue on their present path, the official death date of the Republic will be January 20, 2021. When the act of voting becomes meaningless, a republic no longer exists.

T.L. Davis has posted an important essay about this revolutionary moment we all find ourselves facing. Some excerpts are below.

NB: The mention of Catch-22 by Joseph Heller refers to this passage from the novel:

“Catch-22,” the old woman repeated, rocking her head up and down. “Catch-22. Catch-22 says they have a right to do anything we can’t stop them from doing.”

“Didn’t they show it to you?” Yossarian demanded, stamping about in anger and distress. “Didn’t you even make them read it?”

“What law says they don’t have to?”

Excerpts from the essay:

Despite the fact that the Constitution of the United States of America has largely been ignored, defamed and dismissed, it continues as a legal document and as a formal message from the founding fathers to future generations. They could not be here to fight every war for us or even every battle, but the purpose of the Constitution was to give us the weapons with which to fight for ourselves, for our nation, our land that we live on. The weapons are there for us to use, if we want freedom. But, no one is going to give it to us, or live up to their obligations to follow it. It is the moment Mike Vanderboegh identified in the book Catch 22 which really is: “We can do anything you can’t stop us from doing.” Someone has to stop the madness and that someone is you.

Breaking down the Second Amendment is important right now, this minute, for people to understand their roles in the upcoming fight for this nation. “A well-regulated militia…” Let’s start with that. A well-regulated militia is a formation of the people, the farmers, the store clerks, the truck drivers, the factory workers, etc., who are trained to some degree, if only how to hold, aim and fire their weapons at the instruction of commanders or if unstructured when they are endangered in their position. It is NOT what the media and politicians have said in that it is the National Guard. No force, paid by the government, can be the “militia” that is reserved solely for the people themselves, i.e. land owners and equity holders in the republic, reliant upon a free society to support their lives. The Second Amendment does not apply to government forces who can be manipulated by the very enemies of the people who command them.

“…being necessary to the security of a free state…” The founders who had just fought a vicious and largely unsupported war to be free of a distant and unresponsive government who viewed them as nothing more than wealth miners of the new world, subject to the military authority of the crown for obedience, fully understood that the only way to secure a “free state” was to arm the average person whose life and liberty would be at threat from a similar government, perhaps the very one they were devising in Philadelphia. They did not know the future and probably would have been surprised that their document guided America through more than two centuries before it also became so corrupt and meaningless as to threaten the lives and liberty of its citizens.

I’m sure that most people have read the Second Amendment so often that they might have become blind to what it really means, or have accepted other’s definitions without much thought. Read that phrase one more time. “being necessary to the security of a free state…” I hold that “…a free state…” can have a couple of different meanings. It can mean that we are all armed so that we can secure our state the political subdivision of the whole, from the union, should the union of states become corrupt and damaging to the one state, or it could mean the union as a whole, or it could mean an individual’s state of being free. At this point in time, any definition one wants to accept for “…a free state…” works as any and all are under prescient threat.

“…the right of the people to keep and bear arms, shall not be infringed.” Here again, the “people” as Antonin Scalia points out in his opinion of the court in District of Columbia v Heller:

So, the meaning of the Second Amendment is clear that the people, those familiar folks in the mirror, have the right to keep and bear arms to secure a free state, forming militias among the people to achieve this goal.

But, is there sufficient threat to qualify the mobilization of the militia to secure a “free state?” I ask this question only to the internal conscience of the reader. It is not a bar that is set by law or regulation. It is a determination one must make for themselves, but thoughtful consideration of the issues is still warranted. So…

The entirety of the republic is based upon the consent of the governed. That consent is transferred from the people to the individual representatives every two years, four years and six years, but is always subject to a democratic vote, the winner of the several races for representatives and senators become official with the outcome of the vote with each vote representing a person of legal age, proper residency and mental capacity to transfer that consent. When it comes to the president, the democratic outcome of the vote is further qualified by electors to the electoral college, ensuring that should the greater population choose a tree, or a clearly incompetent, as a president, the electors can choose otherwise to secure that the single most powerful person in the nation is capable of fulfilling the duties as a matter of national security.

The people, however, maintain their consent and through popular action might revoke it legally through recall, impeachment or physical removal. Where their votes have not been faithfully tabulated and their consent properly conferred to the elected representative, there is no transfer of consent. Where there is no transfer of consent, there is no legal authority to pass laws or convene congress. The consent has not been transferred and the republic ends immediately.

It is clear, after the weeks have passed since the election, that there is no means of arriving at the appropriate transfer of the consent of the governed through legal means. Judges, Secretaries of State, Governors and representatives of the people are incapable of dispensing the true and faithful duties of their offices for various reasons, all of which stem from some sort of corruption, be it bribery, violation of oath, treasonous intent or some other corrupting influence.

Over these weeks, the people have seen their votes discarded, changed and invalidated. Their objections to illegalities in the processes of tabulating and verifying votes has been met with complicit silence, refusing a redress of grievances.

Still, at the end of the day, that is fast approaching, the people of the United States seek a peaceful means of resolution. They look to the Supreme Court for favorable rulings. They assemble at state houses to demand that their votes be counted and verified. They wait for some official to declare their voices heard and the egregious fraud exposed and reversed. They wait for the possibility that the republic can continue, that rule of law has been restored and respected.

In absence of that, WHAT?

It’s time to stop looking to the corrupt for honesty. It’s time to stop looking at officials for guidance. It’s time to stop expecting anyone to do the job of the citizen. There is only one militia, it is the people. The militia has a right to keep and bear arms, not for hunting or self defense, but the defense of the nation, their lives and their liberty. If you want freedom, you are going to have to fight for it like almost every American generation in history. Some of those who have fought on foreign soil for some political objective that kept changing understand what is expected, but this time it is for their homeland, to secure it from globalists that do not recognize individual rights. It is a fight for the ground their children and grandchildren play on. It is for the right of self determination. You can’t imagine the nation we will live in if we do not fight to preserve this one and I suggest that we should go further than that. If they force us to arms, by their inability to restore our rights, we must not put them down until the corrupt who have conspired with the communist governments abroad have been ruthlessly ripped from their seats of power. There is no going back to some previous version of America, there are no roads to the past. We have to build a new road, first with arms and then with reason. But, this stolen election cannot be our last breath of freedom. It is a cause to fight. Let them go through the motions, but in the end only the eighty million people who were robbed of their consent have standing in the court of the republic.

Read the whole thing at 12 Round.

5 thoughts on “There is Only One Militia, and it is the People”