Ashraf Ramelah revisits the massacre of Egyptian Copts that took place nine years ago this fall, and consequent events since then. 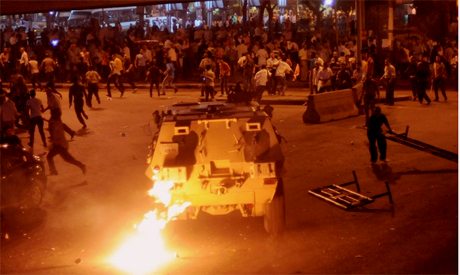 On the Anniversary of Egypt’s Maspero Massacre, Christian Copts continue to give Al-Sisi a pass

This autumn marked the ninth anniversary of the brutal murders of innocent Christian Copts in a tragedy known as the Maspero Massacre, when thousands of peaceful Copts and Muslims gathered on October 9, 2011 and marched towards Cairo’s Tahrir Square. On three separate occasions around that date Egyptians protested the previous eight months of ramped-up violence against Coptic Orthodox Christians. At their third and final protest, army tanks overran the peaceful crowd, killing 30 and injuring 130, while another military division arrested and “disappeared” Christian demonstrators.

The Egyptian military had assumed power in January of that same year when the late President Hosni Mubarak stepped down eighteen days after the breakout of the Arab Spring. In Egypt’s transition to elections, the Supreme Council of the Armed Forces (SCAF), twenty-two high ranked officers (top generals including Lieutenant Major Abed El Fatah Al-Sisi), took control of all branches of government and the media.

There was a huge surge in attacks against Copts during the aftermath of the Arab Spring. The SCAF government was negligent for unreasonable delays in locating and pursuing suspects. Their failure became the green light for even more hostile elements to open fire on Copts and the churches.

In response to this, thousands of Orthodox Christians were led by two priests to gather and parade through the streets to protest these crimes. When the dust settled on “Anger Day” (the third protest) near the Maspero Radio and Television office building, there were more than one hundred arrests of lawful demonstrators by the military. Christians were hauled away and interrogated. Many were never seen again. Some were beaten and then released.

Six years after the Maspero Massacre during the pre-election period in January of 2018, SCAF’s nefarious connection to the Maspero Massacre was made public by an insider, Lieutenant General Samy Annan, a political figure and SCAF military general. Annan’s 2018 campaign for president against incumbent Al-Sisi leaked incriminating information against the president for being the very one behind the military’s Maspero aggression.

The information was actually leaked to the public by a staff member of Annan’s presidential campaign. This staff member was subsequently arrested, tried and jailed for releasing classified military documents to the media. Annan was arrested and sentenced to house arrest by a secret military court. His political career was ruined as his campaign and political party were terminated.

How exactly was this accomplished? The complicit media silenced the leaked material and announced the end of Annan’s campaign due to an illegality regarding his military resignation. The armed forces publicly accused Annan of breaking military protocol by not resigning with intention to run for public office. Annan insisted that he made a timely official resignation before running and was not guilty of breaking this rule, although the document to prove or disprove the claim has never been seen.

SCAF leadership, the Maspero Massacre, and the threat of Lieutenant General Samy Annan

Six months later, in June 2018, Egypt’s president, Abed El Fatah Al-Sisi, won his second term in office by a landslide. He continued to be more than a satisfactory choice for the country, which needed to replace the dreaded Muslim Brotherhood-supported Mohamed Morsi or any Morsi substitute. In fact, by now Al-Sisi was ingratiated to the people and highly favored. However, taking no chances with his re-election, Al-Sisi resorted to state interference with opposition campaigns and other ploys to destroy candidates. One feared opponent was Lt. Gen. Samy Annan.

(See my article for details about that race)

Why was Lt. Gen. Annan such a credible threat to Al-Sisi’s second term campaign? Annan was an eyewitness behind the scenes inside SCAF’s Maspero protest management, in which it was revealed that Al-Sisi played the lead role against the Christian street protesters. As a former fellow SCAF member, Annan was part of a contingency inside the military council meeting immediately following the Maspero tank attack. Annan stood with three other senior military members in sharp criticism of the violence against demonstrators and the involvement of Egyptian Military Intelligence headed by Al Sisi.

The heated debate revealed that the army alone was not responsible for the force used, but was ordered to use it by military intelligence affiliates, according to the leaked documents. Furthermore, council members exploded in anger over the possibility of their worst fear materializing — Western intervention to protect Christian Copts. During the argument, Al-Sisi found support from the head of SCAF, Field Marshal Hussein Tantawi, who took Al-Sisi’s position and defended him against Annan, who was an aide to Tantawi and a higher-ranked officer than Al-Sisi.

Tantawi promptly requested that the Attorney General remove public prosecutors from investigating the case. His request was granted, and the case was turned over to military prosecutors where evidence proving the responsibility of Al-Sisi in the slaughter operations against Copts that took place in the streets and in the room of a building adjacent to Tahrir Square could be concealed. The truth was suppressed.

The story remains buried by the state. However, Arab mainstream media and social media reporting from outside Egypt with Arabic-language accounts have disseminated the leaked information ever since. Most Copts living with the Al-Sisi regime have acquiesced to the official story of Annan’s departure from politics. It is understandable and easy to turn a blind eye to grim facts, especially in a heavily-censored and controlled country.

The unprecedented generosity of the Egyptian president towards the Orthodox Copts in recent years makes it easier for Copts to close a bad chapter and focus on the head-of-state’s lavished favor. Al-Sisi permitted the Coptic Church to build a mega-cathedral in Egypt’s new administration city deep within the Egyptian desert, although still uninhabited. Al-Sisi has attended two Coptic Orthodox Christmas Eve services since he took office, which is a break with the tradition of shunning the Christian religion. Al-Sisi nominated two Christian governors on the same day for the provinces in a notably expedient manner to please the Coptic Church.

Such attention is endearing and persuasive and much utilized by Al-Sisi for obvious reasons. Copts do not take risks with their welfare in order to speak out for truth — something hardly possible in America today. The pope would not support it and alienate anyone who does, and the state could retaliate with “aurora visits.”

One thought on “The Anniversary of Egypt’s Maspero Massacre”