In his latest guest-post, Matt Bracken reviews “Civil Defense Manual”, which has been linked on Gates of Vienna’s sidebar for the last few weeks. 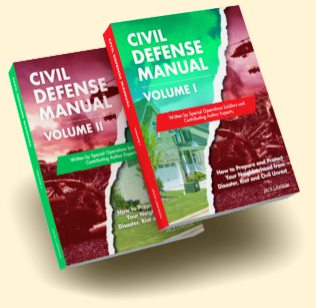 The Civil Defense Manual, by Jack Lawson:
How to Prepare and Protect Your Neighborhood from Disaster, Riot and Civil Unrest

If you are reading this, chances are good that you consider yourself a liberty-loving patriotic American. You might also consider yourself, as I certainly do, a “prepper,” that is, an all-around survival and preparedness advocate. As preppers, we’ve long been anticipating crises ranging from financial collapse, to violent insurrection, to natural or even man-made disasters that could extinguish our electrical grid in a flash. Now, deep into 2020, the year of the Chinese Coronavirus pandemic and widespread Marxist-inspired riots, it appears that we may at last be on the doorstep of the long-anticipated SHTF scenario. Revolutionary Communists, (currently wearing the Antifa and BLM brands, and with the tacit support of today’s far-left Democrat Party), have declared that under no circumstances will they accept a Trump election victory. Instead, they promise to take their revolution to the streets, in violent nationwide riots beyond any yet seen in American history.

Across the political spectrum, the number of Americans who believe that a second Civil War is imminent is at an all-time high. This heightened concern is why, for example, it costs three to four times more to rent a truck to move household goods from a liberal to a conservative state than vice versa. This is also why common rifle and pistol ammunition is at unprecedented scarcity, and when it can be found, it can only be purchased at exorbitant cost. A hundred rounds of standard 5.56, .308 or 7.62X39 rifle ammo can easily fit into your jacket pocket, and today they might cost you a hundred dollars — a buck a bullet — if you can find them. The reason for their shortage at this moment in history is that millions of Americans have come to the bitter realization that they might actually need them to defend their lives, families and property.

By comparison to the extra cartridges, what value would you place on obtaining the equivalent of a master’s degree in surviving through a period of violent insurrection, or even civil war? I’d imagine much more than the hundred or so dollars you might spend for a similar number of extra rounds for your rifle or carbine.

So, what is it about Jack Lawson’s Civil Defense Manual that makes it so valuable? First of all, it’s nearly a thousand pages long, making it too big to fit inside one book cover. Instead, it’s broken into two volumes that are sold as a set. And the two volumes are large in size, measuring 11 X 8.5 inches, typeset in a generous 14-point font. In the end, the CDM is meant to be readable even by candlelight, post SHTF. And it’s written so that ordinary people can understand it, completely free of esoteric military or technical jargon, with key sentences bolded to stand out.

The CDM is not just another long list of expensive survival gear and equipment, nor is it advice to move to a remote mountain in Montana. The CDM is much more practical than that. In fact, Lawson’s most essential idea, the Neighborhood Protection Plan, or NPP, can be adapted to any location and situation, from the urban high-rise, to apartment complexes, to single-family homes in the suburbs, and to rural areas. The critical concept behind the NPP is that the inhabitants of an individual home, townhouse or apartment building cannot stand alone and successfully defend themselves against determined attacks by roving gangs of armed predatory thugs. It will be too late to defend your single domicile when your neighbors’ homes are going up in flames.

A Neighborhood Protection Plan is not a glorified Neighborhood Watch, which is a passive arrangement whereby neighbors communicate with existing local Law Enforcement. Nor is an NPP a “militia” or any other kind of independent paramilitary force. In the first case, the activation of an NPP is predicated upon the inability or even the unwillingness of local LE to protect a neighborhood or other area during a crisis. In the second case, forming a militia or other paramilitary force implies that this group is planning to undertake proactive operations extending beyond the defense of a neighborhood and its immediate surrounding area. The Civil Defense Manual does cover the entire range of defensive options from existing Neighborhood Watch programs, through Neighborhood Protection Plans, and ultimately to coordination between separate NPPs for the mutual protection of wider regions, with the ultimate goal of restoring pre-SHTF civility, public safety, and restarting any disrupted infrastructure.

Lawson provides a sample command structure for his NPP concept, as well as methods to organize the NPP well in advance of a catastrophic series of events that might require a self-defense force to be stood up in days or even hours, instead of in weeks.

In the author’s vision, the elected Primary Leader of the local NPP is given overall command authority during emergency situations, but tellingly, the Secondary NPP Leader in Lawson’s suggested hierarchy is also the Fire Chief. During a breakdown of civil order, and the collapse of local infrastructure, when existing fire departments might be unable to respond, the protection of homes within the NPP against the risk of fire becomes second in importance only to protection against armed gangs, gangs which might be using Molotov cocktail firebombs as terror weapons to elicit surrender. It should also be recognized that during a period when the normal infrastructure might be disrupted, and running water and electricity are unavailable, the threat to structures from open-flame cooking and heating fires, and even candles, will be extremely high.

Just below the Fire Chief in Lawson’s suggested hierarchy comes the Third Section, the Watch Center Leader, overseeing a constantly manned Watch Center. These are followed by the Communications and Intel Section, the Supply Section and the Medical Section. The roles and responsibilities of each section are covered in detail.

This is not to say that Lawson has designed the perfect one-size-fits-all organizational structure to cover every post-SHTF neighborhood self-defense requirement, but what he has done is to conceptualize and provide a practical template that will serve well during a time of escalating crisis. When your neighborhood is undergoing a period of unprecedented stress, a viable pre-existing Neighborhood Protection Plan will be a Godsend. Your particular organizational structure can later be adapted to your unique local circumstances.

Every neighborhood self-defense force or NPP will require a small cadre of individuals that Lawson refers to as “self-starters.” If you are contemplating the purchase of the Civil Defense Manual, then that initial self-starter is you. For the Neighborhood Protection Plan to move from concept to reality, you will need to find and recruit a small nucleus of interested volunteers. Until someone more suited to the task of primary leader emerges during the formation of your NPP, that initial leader is you. The CDM will guide you through the tricky process of germinating the idea of the NPP within your neighborhood, to organizing its first small meetings, until your NPP’s final culmination as an effective volunteer community defense force.

If you purchase the CDM, I strongly suggest that you read it now, from front to back. Don’t wait, because it will take some time to get an NPP up and running. The two volumes of the CDM blend hard data and information, contributions by subject-matter experts, short fiction and non-fiction survival vignettes, and Jack Lawson’s own African combat experiences and survival philosophy. In this review, I have only touched on a few key concepts found in this truly encyclopedic work. After you have read and digested the complete Civil Defense Manual, you will be miles ahead of the “herd” in the coming survival derby. You will not only learn how to protect your own home, but how to defend your entire neighborhood by pooling all of its combined talents and resources for the common defense through “strength in numbers.” By doing so, you will be maintaining vital pockets of civil society amidst a roiling sea of violence and barbarism.

Just the chapter on post-SHTF radio communication, written by the acknowledged subject-matter expert NC Scout, aka Brushbeater, is worth more than the entire cost of the two-volume CDM. Most folks, even preppers, do not sufficiently appreciate the critical importance of maintaining secure communications across a spread-out community during a prolonged crisis. The immeasurable force-multiplier effect of strength in numbers does not come into effect unless the entire NPP can communicate. (While we’re on the subject, go ahead and buy some inexpensive yet invaluable Baofeng UV-5R handheld VHF-UHF radios — while you can. You can thank me, NC Scout and Jack Lawson for the tip later on.)

So instead of buying yet another expensive box of bullets, I strongly recommend that you invest in Jack Lawson’s Civil Defense Manual, and earn yourself a master’s degree in post-SHTF neighborhood self-defense and community survival. What you learn from the CDM will be worth a thousand times more than another extra hundred rifle cartridges to stack on top of your already existing prepper stockpile.

18 thoughts on “Preparing for the Boogaloo”