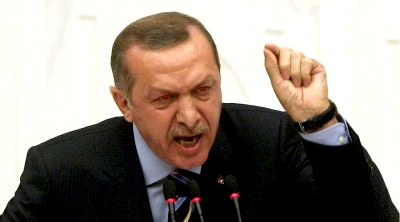 An unexpected side effect of the October 16 beheading of Samuel Paty has been an open diplomatic rift between France and Turkey. French President Emmanuel Macron’s response to the crisis provoked a reaction from Turkish President Recep Tayyip Erdogan, causing the latter to question the former’s sanity.

Many thanks to FouseSquawk for translating this article from Le Figaro. The translator reports that the original article includes a video of Mr. Erdogan speaking, with French subtitles:

The Turkish president called on his French counterpart to “have mental health exams”, condemning his attitude toward Muslims. The Élysée has reacted and brought up the “absence of condolence and support messages” from Turkey after the assassination of Samuel Paty.

On Saturday 24 October the Élysée denounced the remarks, judged “unacceptable”, of Turkish President Recep Tayyip Erdogan, who called into question “the mental health” of his French counterpart, Emmanuel Macron, because of his attitude towards Muslims.

Earlier this Saturday during a televised speech, the Turkish president virulently criticized the decisions of his French counterpart towards the Muslim community. “All one can say of a chief of state who treats millions of members of different religious communities in this manner is: First go and have mental health exams,” he declared.

The speech was condemned by the Élysée at the end of the afternoon. “The remarks of President Erdogan are unacceptable. Excess and rudeness are not a method. We demand Erdogan change the course of his policy. It is dangerous to all. We do not enter into useless polemics, and we do not accept insults,” the Élysée commented, according to the AFP (Agence France Presse), in announcing the recall of the French ambassador to Ankara for consultations.

The Élysée also brought up “the absence of messages of condolence and support from the Turkish president after the assassination of Samuel Paty,” the teacher beheaded a week ago is an Islamic attack in the proximity of his school in a Parisian suburb. Also noted were the “very offensive statements (of Recep Tayyip Erdogan) in recent days, notably his call for a boycott of French products.”

The Turkish president did not stop there: He also predicted that Emmanuel Macron would lose the next presidential election in 2022, “because he has accomplished nothing for France. You spend your time attacking me. That will gain you nothing.”

Two weeks ago Recep Tayyip Erdogan denounced as a provocation the statements of the French president on “Islamist separatism” and the necessity of “structuring Islam” in France. A bill on the fight against “The separatisms” in France, directed at radical Islam, should be presented at the beginning of December. It aims to reinforce secularism and consolidate republican principles in France, and includes several points likely to provoke tensions with Turkey, such as strengthened control of mosque financing or a ban on the training of imams abroad.

This dispute is added to a long list of disagreements between Emmanuel Macron and his Turkish counterpart, who regularly takes up the defense of Muslim minorities throughout the world. From the tensions in the Mediterranean to the conflict in Libya, to the clashes in [Nagorno-]Karabakh, a number of issues currently pit Paris and Ankara against each other.