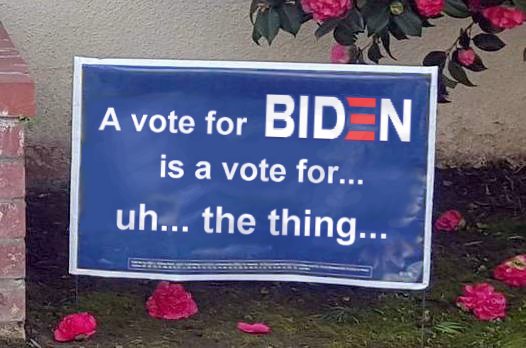 Sundance at Conservative Tree House asked for readers to supply what he calls “ground reports” on the upcoming election. Since the current political atmosphere is so toxic, and most polls are so obviously bogus, collective anecdotal accounts of what’s happening are all we have to go on.

Rather than clog up his comments section with my remarks, I’ll post them here instead. But first I want to recycle a joke from four years ago. It was relevant in October of 2016, and it’s even more relevant today:

“When this dreadful election is finally over, I hope we can still be friends, even if we are in different internment camps.”

During the last two or three weeks, the number of campaign signs in people’s yards in this part of Central Virginia has really exploded. In the region I’m personally familiar with — which comprises a rough triangle having Charlottesville, Lynchburg, and Farmville as its vertices — Trump signs outnumber Biden signs. In my immediate neighborhood, however, the Biden signs are ahead. My neighbors are mostly black, which I assume is one of the main reasons for the difference.

The converse is not true, however. There are enough white Gutmenschen in the area — especially retired transplants from Yankeeland — to give Biden a strong showing among the palefaces. Among the white population, the Biden signs are usually found in front of middle class or upper middle class houses. A trailer or double-wide inhabited by white people is almost certain to have a Trump sign, if it has any sign at all.

A couple of other correlations are worth noting. The first is the display of American flags. I haven’t seen any yards with Biden signs that also fly an American flag. The Trump supporters, on the other hand, are very likely to have a flag on a pole, or hanging over the front porch.

For the last year or so I’ve noticed a sign that some people post in their front yards: “Love thy Neighbor / NO Exceptions”. I wondered what particular import the message had, but now that election season has kicked in, the correlation is clear: If a “Love thy Neighbor” yard has a campaign sign, it’s inevitably a Biden sign.

This leads me to conclude that the “Love thy Neighbor” initiative is about race. I take it to mean: “You lousy racist! You need to be high-minded like me.” It’s virtue-signaling, in other words. It can be found in the front yards of both black people and white people.

There’s no way the entire Commonwealth of Virginia will go for Trump. The demographics of the state are now dominated by dense concentrations of snowflakes, federal employees, and culture-enrichers in the Wretched Hive of Scum and Villainy, a.k.a. Northern Virginia, plus the more progressive zip codes of the Richmond area and Tidewater. And Charlottesville, of course, which habitually votes just to the left of Ann Arbor.

Taken county by county, Trump would win, but the majority of the population in the Old Dominion is loyal to the Communist Democrat Party.