Yesterday a Pakistani mujahid went on a jihad rampage on the street in front of the former offices of Charlie Hebdo in Paris, wounding two people. The incident is described as a “stabbing attack”, and the weapon used is reported to have been a “butcher’s knife” or “machete”, but based on the photo below, it looks more like a meat cleaver.

Many thanks to FouseSquawk for translating this article from Paris Match:

Knife attack in Paris: The lives of the two victims “not in danger”

The two victims of the knife attack which took place Friday in the 11th arrondissement are two employees of the France 2 magazine “Cash Investigation” working for the production company Premieres Lignes (First Lines), located in the former premises of Charlie Hebdo. Their lives “are not in danger”, stated the Prime Minister. 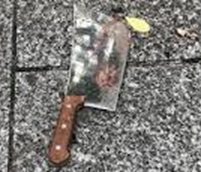 Among the wounded are two employees of the Premieres Lignes Television, the production company that produces notably “Cash Investigation”, declared the host of the broadcast magazine France 2, Elise Lucet. “I have the producers and several employees of Premieres Lignes Television on the phone […] What is confirmed to me now with certainty, is that two of our employees are wounded, a man and a woman, ho were wounded by a man on the street in front of the former premises of Charlie Hebdo,” she added.

“One of the employees saw this man running with a butcher’s knife or a machete after one of our employees who had already been wounded and was also bloody,” stated the journalist.

One employee of Premieres Lignes, contacted by AFP (Agence France Press), also testified that two of her colleagues had been wounded in the attack. “Two colleagues were smoking a cigarette in front of the premises on the street. I heard screams. I went to the window and I saw one of my colleagues, stained with blood, being chased by a man with a machete in the street. We know that our two colleagues are wounded, but we don’t know any more at the moment,” she stated.

The Prime Minister, who went to the scene of the attack in the early afternoon, gave news on the state of health of the hospitalized victims, noting that their lives “are not in danger, thank God.”

Below are excerpts from a BBC article about the incident:

A stabbing in Paris that left two people seriously injured is being treated as a terror attack, the French interior minister has said.

Gérald Darmanin said the attack near the former office of satirical magazine Charlie Hebdo was “clearly an act of Islamist terrorism”.

An eighteen-year-old man of Pakistani origin described as the main suspect was arrested near the scene.

Six other people are in custody and are being questioned, police said.

Hat tip for the BBC article: Reader from Chicago.