Let’s be clear about it: the Wuhan Coronavirus is not a pandemic.

If we were in a normal situation, and the disease hadn’t been politicized, we could rely on recorded statistics to tell us whether or not COVID-19 should be classified as a pandemic. Unfortunately, this is not a normal situation. Statistics on the infection have been gamed and manipulated to inflate both incidence and fatality rates. I have no confidence in any of the aggregate statistics put out by state and federal governments.

Therefore I am forced to focus on anecdotal evidence and utilize common sense. For the past three or four months, during my very limited social interactions (mostly involving family and close friends), I’ve made it my habit to quiz people about their personal experience with the coronavirus: Do you know anyone who has contracted COVID-19? If so, did any of them die of it?

If this were a real pandemic, we would all know multiple victims of it. Every family would have seen at least one fatality from it. Every person would be able to give a lengthy roster of friends and relatives who had contracted it, some of whom would have died.

But this is most definitely not the case with COVID-19. The only encounter we have with alarming news about the disease is when we watch TV.

[An aside — I’m certain that nurses and other front-line health care workers would are exceptions to what I just described; none of the people I have talked to fall into that category. However, the experiences of medical professionals do not invalidate the general conclusion that COVID-19 is not a pandemic.]

The evidence is overwhelming that there is no justification for the draconian shutdowns and mask mandates and forced social distancing. The “pandemic” is all hype and hoopla aimed at credulous people with the evident intention of scaring them witless. 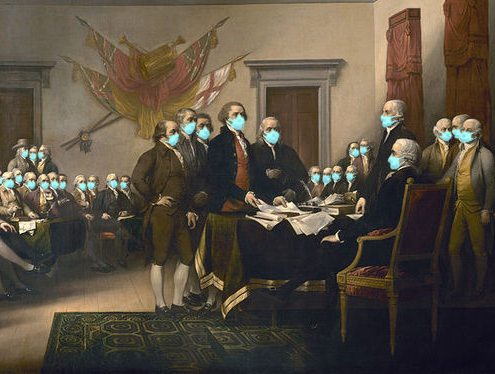 I have a couple of other points to make before I conclude this evening’s Corona rant.

Gates of Vienna’s long-time British commenter Mark H has compared the measures taken against the coronavirus — primarily the mask mandate — with those used to combat drunk driving. I have the highest respect for Mark, so it pains me to say that this is an inappropriate analogy. If contracting COVID is like a deadly encounter with a drunk driver, then the strictures imposed on the British public by Her Majesty’s government are like requiring ALL drivers to get off the road until the drunk drivers have all been neutralized. No one would be allowed to get into his or her car for fear of interacting with a drunk driver somewhere out there on the road.

A sane approach to the issue would be to help the small minority of people who are severely at risk — Mark is one of those — to deal with their situation. Detailed, unsensationalized information should be made widely available about the dangers of COVID-19 for the very elderly, people with respiratory diseases, diabetics, and acute sufferers from other chronic diseases. The resources of the state could be utilized to intervene with and protect people in those at-risk groups — to help them in their homes, deliver food to them, provide sanitizing materials gratis, etc. Meanwhile, relatively healthy people — the vast majority of the population — could go about their business unhindered.

That would be the sane approach to the issue, but governments throughout the West are collectively insane at the moment. It seems that scaring the bejeebers out of ordinary citizens is their preferred plan of action.

Here’s another analogy for the current regimen: imagine that the government decided to help everyone with Multiple Chemical Sensitivity Syndrome (MCS) by banning all perfumes, deodorants, after-shaves, and other commonly-used fragrances. Mind you, that’s what some sufferers from MCS demand — and one can sympathize with them — but governments have so far eschewed the imposition of blanket bans on fragrances.

The draconian response to COVID-19 is similar. In both cases, the affected subgroup is a tiny percentage of the general population. And in both cases the measures imposed (or proposed, in the case of MCS) harm and inconvenience everyone. In fact, the lockdowns and restrictions imposed because of the coronavirus do far more damage to the commonweal than banning perfumes and deodorants ever could.

This seems to me a commonsensical overview of the situation with the Wuhan Coronavirus. Yet common sense is utterly lacking in the government policies concerning the disease.

It’s understandable that political leaders may have invested so much in their initial hardline responses to the hysteria that they are now reluctant to admit error and back away from their earlier positions. And it seems obvious that many of those who were given a taste of absolute power — especially Democrat governors and mayors — like the way it feels and don’t want to relinquish it.

There are major overlapping interests that need the “pandemic” to continue, with all the attendant fear-mongering and totalitarian controls. There doesn’t have to be a single overarching conspiracy behind what is happening now, but it’s clear that some of the wealthiest and most powerful people on the planet view COVID-19 as an exploitable resource.

Bill Gates, Boris Johnson, and Mark Zuckerberg may have quite different reasons for their promotion of the coronavirus scare. For now, however, their interests have converged, and the imaginary pandemic must be inflicted upon all of us.

24 thoughts on “A Virus of Opportunity”