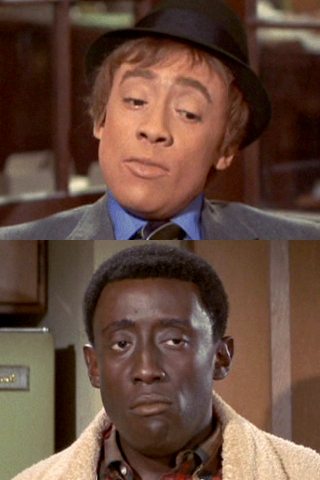 Readers of a certain age will remember Godfrey Cambridge, a well-known (and quite funny) black comedian and actor who died of a heart attack at the age of 43. The peak of his career was in the 1960s and early ’70s.

All the fuss and cancelling over blackface in the past couple of years reminded me of Mr. Cambridge. In 1970 he starred in a strange movie called Watermelon Man, which was directed by Melvin Van Peebles and written by Herman Raucher (the author of The Summer of ’42). In the film Mr. Cambridge plays a bigoted white guy who wakes up one morning to discover he has turned into a negro.

The plot required that the actor appear in whiteface for the first scenes in the movie — a very unusual device in film or on the stage; I can’t recall any other examples. Mr. Cambridge was a talented man, and had no trouble simulating honkiness when the situation demanded it. But it must have been a bitch to get his makeup just right.

The question is: If Godfrey Cambridge were alive today, would he have to be cancelled?

We all know the answer: No, of course not.

Only white people (and possibly Jews, under certain circumstances) can be racists. Black, brown, yellow, red, puce, and green people get a free pass. They can hate, discriminate, and race-bait as much as they like, and white people just have to suck it up.

If you take any incident or process of “racism” ascribed to white people and reverse the races in it, making a mirror image of it, it’s not racism. It’s just white people getting their just comeuppance.

It doesn’t matter if a particular group of white people form a dwindling and persecuted minority, with no meaningful political power, as is the case in South Africa. They’re still white devils, and deserve whatever bad things happen to them.

Those are the rules of the game of WAYCISM. We all know them by now.

We conservatives, or race-realists, or deplorables, or whatever the heck we are, spend far too much time and energy pointing out this double standard. Everybody on both sides of the issue knows about it, and no amount of complaining is ever going to change it. I see so many spittle-flecked articles and op-eds detailing the ways in which “racism” is unfair to white people. And to what end? It’s wasted effort that could better be spent in other pursuits. We could spend the same amount of time brainstorming strategies to thwart the malign forces that are attempting to destroy what remains of Western Civilization.

There’s even a pseudo-scientific academic discipline justifying the idea that only whites can be racists. If I’m not mistaken, it’s called Critical Race Theory, and it employs dense technical jargon to devise lengthy analyses demonstrating that only whitey can be evil.

This is not an opponent that can be defeated on his own playing field, following his own rules. We need to devise a different game.

Writing the above brought to mind Adam Clayton Powell Jr., whom readers of a certain age will also remember. Mr. Powell was a notoriously corrupt and fabulously successful African-American politician who served many terms representing New York in the U.S. House of Representatives. The apogee of his power coincided roughly with the peak of Godfrey Cambridge’s career in show business.

The thing about Adam Clayton Powell is that he was a very light-skinned negro who could have “passed” as white if he wanted to. He could have moved to the West Coast and maybe changed his name; he looked vaguely Lebanese.

But he chose to stay in Harlem and build a career in politics centered on civil rights for blacks. At the time people (white people, that is) said he did it because he was selflessly dedicated to advancing the welfare of his people.

Well… When you read the sordid details of his life, it becomes obvious that the real reason was that he could make a far more lucrative living playing the Race Game in Washington D.C. than he could ever have managed by becoming white.

The race racket provides ample rewards for its most skilled and devious practitioners. It was true in 1965, and it’s still true today.