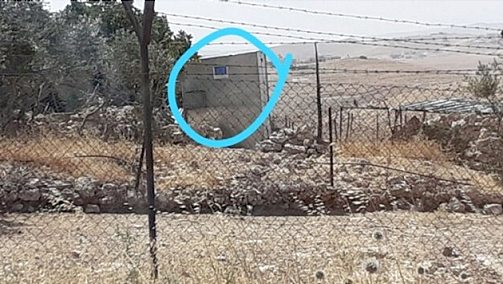 While the German government opposes Israel’s civil authority over administrative districts of Judaea and Samaria, the EU actively promotes and funds illegal annexation of territory in the West Bank by the Palestinians.

Many thanks to MissPiggy for translating this article from Journalistenwatch:

How self-righteous! While Maas secretly wages war against Israel, he calls for “fair peace”

On July 7th, Foreign Minister [Heiko] Maas held a video conference with his counterparts from France, Egypt and Jordan and condemned the “annexation of the Palestinian territories occupied in 1967”. This is hypocritical nonsense, since German parties and the EU already support the illegal annexation of these areas by the Arabs.

The Israeli government has yet to submit its plans for a civilian administration of Israeli-inhabited areas in Judea and Samaria. Nevertheless, Maas and his colleagues know that these plans “violate international law and jeopardize the foundations of the peace process.”

“We also agree that such a move would have serious consequences for the security and stability of the region and would constitute a major obstacle for efforts to achieve a comprehensive and fair peace. It could also have consequences for our relations with Israel,” Maas and colleagues said.

An empty threat, since relations between Berlin and Jerusalem could hardly be worse. When Maas decided to go to Israel two weeks ago and dispense instructions, angry victims of EU-sponsored terror stood at the door and chanted in German, “Heiko Maas, you should feel ashamed!”

“The recent statement by the foreign ministers of Germany, France, Egypt and Jordan is completely unnecessary, wrong and one-sided. Instead of threatening Israel with the deterioration of relations, pressure on the Palestinian side should finally be increased to bring it to the negotiating table,” said Uwe Becker, President of the German-Israeli Society.

“I find it completely unacceptable to openly threaten the relationship with the Jewish state, while not a single syllable is uttered to call upon the Palestinian side to finally come to the negotiating table with its own proposals to further the peace process. Israel has already stated that it is prepared for serious negotiations, while the Palestinian Authority is exploiting the status quo to once again take refuge in the alleged ‘victim role’. It is equally intolerable for Israel to be accused of breaking international law in the joint declaration, while no mention is made of the terrorism financed by the Palestinian Authority or of the terrorist attacks and rockets of Hamas and its associates. This declaration is unsurpassed in its one-sidedness, and I think it’s terrible that Germany supports this declaration,” he added.

On July 1 of this year, there was a debate in the German Bundestag on Israel’s sovereignty. The so-called “annexation of the West Bank” was condemned by all parties except the AfD.

Speaking for the AfD, Dr. Anton Friesen said: “The so-called West Bank — Judea and Samaria — consists of three areas under the Oslo Accords — A, B and C. Israel, in the non-partisan consensus — supported by both Benjamin Netanyahu and Benny Gantz — has now decided to apply Israeli civil law to Area C, which has been administered by the Israeli military administration since the Six Day War. (Reminder — a planned Arab war of aggression that was prevented by Israel.) This brings good news for the Palestinians who live in this area: They are made equals under Israeli law and can even obtain Israeli citizenship. This means, they can consider themselves as lucky in the Arab world as well, since they are some of the few Arabs who can enjoy human and civil rights. Even better, the Trump plan, so deeply renounced by the political class in Germany, finally brings movement to the Middle East conflict after years of stagnation, and strengthens the prospects for a Palestinian state without endangering the existence of Israel.”

Now the German Foreign Minister, who supposedly entered politics “because of Auschwitz”, is taking it a step further. He is organizing, with neighboring Arab states, the resistance against “The border change of 1967”, which was not “agreed upon by both parties to the conflict.” Perhaps Foreign Minister Maas wants Jordan to invade Judea and Samaria once again, because that is where the “borders of 1967” would be.

With the help of the EU, Germany and dubious NGOs, the Palestinian Authority (PA) is in the process of changing the borders within Judea and Samaria, which were contractually agreed upon in the Oslo Agreement. The origin of this strategy of creeping land-grabs is the so-called Fayyad Plan from the Palestinian ex-prime minister Salam Fayyad, which in 2009 showed ways to establish a Palestinian state — even in territory controlled by Israel — without inconvenient negotiations.

The NGO Regavim has been documenting these illegal Arab settlements, for which a striking number of taxpayer-funded German NGOs and thus German Chancellor Angela Merkel also personally advocate.

The “Society of St. Yves” is a dubious semi-church NGO which cooperates with the CDU’s Konrad Adenauer Foundation. It is financed by the “Civil Peace Service” and Agiamondo from the Ministry of Development Aid as well as Misereor and the EU. Every year it files around 700 complaints from Palestinians who, by way of illegal buildings and illegal agriculture, attempt to gain Israeli territory according to Ottoman nomadic law.

These projects are often funded by the EU and Germany, as the signs and stickers proudly proclaim. The PFLP-affiliated Union of Agricultural Works Committees is funded by the German Foreign Office, the Ministry of Development Aid, Misereor and the Rosa Luxemburg Foundation of the “Left”. It is also associated with the murder of 17-year-old Rina Shnerb, as JouWatch reported. 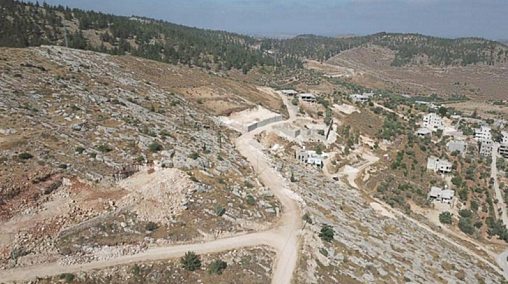 Since the announcement of the Trump peace plan, the Palestinians have not negotiated. Instead they have stepped up their efforts to illegally seize land, according to a petition by Regavim. In Kfar Nahalin (Area B) towards the Israeli city of Rosh Tzurim in Gush Etzion (Area C), the construction of about 20 illegal villas began in recent weeks. According to the signs, the buildings are sponsored by the European Union. As usual, the EU has refused to give any information about their or the World Bank’s belligerent action in Israel (pictured). 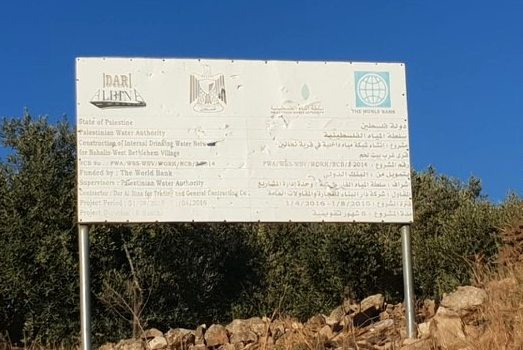 “The EU spends hundreds of millions of Euros every year to create a Palestinian state,” Regavim spokeswoman Naomi Linder Kahn told a delegation of “Jews in the AfD” in August of 2019. “Since 2011, the EU has been saying quite openly that this their goal. It can be found on their website EEAS with the record of all their financing. To the outside world, the EU says that there must be a negotiated solution, but behind the scenes it is creating precedents which make negotiations superfluous for the Palestinians. They later claim diplomatic protection for these areas and deprive Israel of its sovereignty. It’s like a declaration of war.”

“Illegal construction has skyrocketed since the announcement of the Trump plan in all areas for which Israeli sovereignty is intended,” Linder Kahn told Jouwatch on July 9th: “These are buildings that are obviously illegal, obviously in Area C, and full of EU stickers, in order to keep the Israeli government from demolishing them. In doing so, the EU is actively helping to thwart the Trump peace plan.”

“Instead of supporting the constructive approaches of the Trump plan, which wants a secure Israel and a Palestinian state, the German Federal government, in tandem with Jordan, Egypt and France, condemns the application of Israeli civil law to Judea and Samaria,” Dr. Anton Friesen told Jouwatch. “The illegal Palestinian land grab in Kfar Nahalin and elsewhere is being ignored. The Palestinian Authority, which has been succulently fattened by the German government and likes to pass on our tax money to Palestinian suicide bombers, can therefore sit back and continue to block any attempts to resolve the conflict. Where are the Arab-Palestinian peace plans that guarantee Israel the right to be viable and to exist? With this unwise diplomatic measure, the German Federal Government supports the Palestinian position of blockade. The self-proclaimed goal of a two-state solution will be no closer with such methods,” Friesen said.

So while Heiko Maas calls for a “negotiated solution” between Israel and the PA, the EU, the German government and German political party foundations are waging war against Israel by means of “Lawfare” and creating precedents on the ground which deprive the Palestinians of any incentive for negotiations. It cannot be more hypocritical and disgusting.

One thought on “Whose Illegal Settlements?”