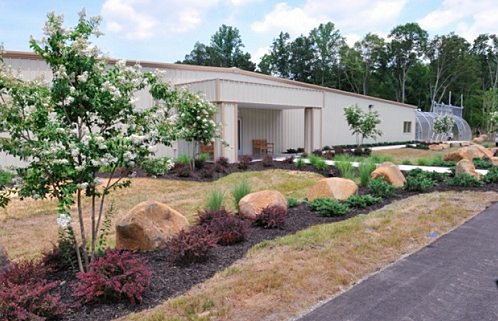 Before we resume our regularly-scheduled programming, I’d like to pay another visit to the Farmville Detention Center.

I wrote last December about the immigrant holding facility known as the Farmville Detention Center, located not far from here in Farmville, Virginia. It’s operated by Immigration Centers of America, a contractor for Immigrations and Customs Enforcement (ICE). The center’s inmates, mostly Hispanics and Haitians, enjoy cushy living conditions at taxpayers’ expense.

Since the Coronamadness set in last March, the price tag on the culture-enrichers’ lodgings must have increased drastically, based on the article below from The Farmville Herald. Each inmate is now receiving a medical checkup twice daily.

The most interesting thing about the story, however, is the incidence of symptoms of the Wuhan Coronavirus among the detainees who tested positive for the disease. The headline tells us that 74% of the culture-enrichers have tested positive, which is 268 people. Buried much deeper in the story is the fact that only three migrants — 1.1% of those tested, or 0.8% of the population of the facility — have been hospitalized with serious symptoms, and none of those has died.

The only reason ICE ordered general testing at the center was the fact that three cases of the coronavirus — possible the same three who were hospitalized — appeared among a group of newly-arrived residents who were under quarantine. That is, hundreds of the center’s inmates had already been infected with the disease without showing any symptoms.

The American people — and not just Americans, but the whole world — are being massively hoaxed about the ChiCom flu. The populace has been indoctrinated to be so frightened of it that millions of people hide in their homes, or venture out in terror, screaming at anyone who isn’t wearing a mask or who gets too close. The economies of Western countries have been wrecked by the lockdowns, more of which are coming as the “second wave” sets in just time for the fall campaign season.

The virus is real, but the official reaction to it, especially as purveyed by the media, is an artificial construct created for political ends.

Below are some excerpts from the article in the Herald:

After testing all the detainees of the U.S. Immigrations and Customs Enforcement (ICE) at the Immigration Centers of America (ICA) Farmville Detention Center, 74% have tested positive for the coronavirus, with 71 test results pending.

ICE Public Affairs Specialist Kate Pote said Tuesday, July 14, ICA Farmville offered testing to all of its detainees from Wednesday, July 1, to Friday, July 3. 359 of the center’s 360 inmates were tested, with only one detainee declining testing.

Of those 359 detainees, 268 have tested positive. 20 have tested negative, and 71 test results are pending.

Officials said Tuesday three detainees were actively hospitalized due to complications with COVID-19, but in stable condition. Pote added the majority of others who tested positive are asymptomatic, but are being closely monitored and are receiving appropriate medical care.

Detainees who have tested negative will be retested and are being held separately from positive detainees.

Medical checks, according to officials, are being done twice daily, including a temperature screening and medication disbursement.

Pote said every detainee who needs medical attention is being seen, and ICA Farmville staff have been working to keep detainees informed of the developing situation as it evolves, including how their care and custody will be managed.

6 thoughts on “COVID on ICE”