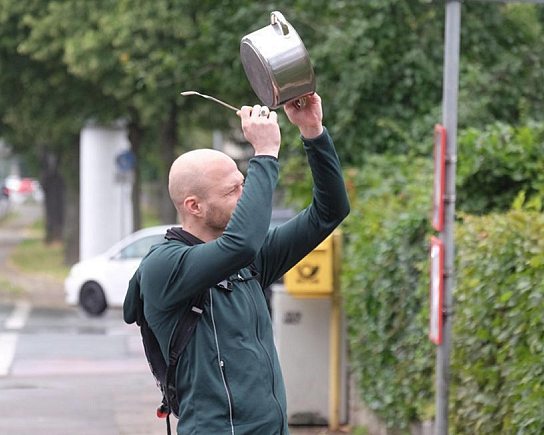 Protesting with spoon and pot against the muezzin call

Many thanks to MissPiggy for translating this article from Westfalen-Blatt:

Why does Marcel Bauersfeld makes noise in front of the Herford Mosque during Friday prayers?

The police were already waiting for him: Marcel Bauersfeld in conversation with the two officers in front of the Ditib Mosque. After a lengthy discussion, the 37-year-old is sent away. But he says, “I’ll be back next Friday.” Photo: Moritz Winde

When the muezzin calls to prayer at the Ditib [Turkish-Islamic Union for Religious Affairs] Mosque, Marcel Bauersfeld stands on the sidewalk of Bielefelder Straße — again. He hammers with a spoon on a cooking pot. Shortly afterwards, the police come and send him away

Is this freedom of expression, or does the 37-year-old interfere with religious freedom with his actions? “Two fundamental rights collide,” said the police spokeswoman Simone Lah-Schnier. However, as soon as there is a suspicion of a criminal offence, the police may, as in this case, issue a dispersal order. According to the government spokeswoman, the man from Herford has never had a police record, but he is now being charged with disturbing religious freedom.

On July 3, Marcel Bauersfeld had also made a lot of noise in front of the mosque. A week ago he used a cowbell. “That was confiscated by the police. That’s why I’m here with the pot today,” he says. The case is currently before the Bielefeld Public Prosecutor’s Office. Simone Lah-Schnier says that it will be examined whether it is a criminal offence. For the time being the cowbell will remain in the custody of the authorities.

For the third time in a row, the 37-year-old is protesting this Friday against the Islamic call to prayer that Mayor Tim Kähler had allowed the Turkish community in mid-June. Since then, the decision of the head of the administration has caused controversy. The CDU, led by mayor Anke Theisen, had criticized the decision. A majority of the City Council, however, regards the call to prayer as a fundamental right.

Marcel Bauersfeld makes it clear in an interview with this newspaper: “I am neither left- nor right-wing. Nor do I have anything against other cultural practices. The only thing that bothers me is the muezzin call, which in my view is nothing more than calling out a Caliphate. I don’t want to have Sharia law here.’

The 37-year-old has announced he will be back next Friday. “I’m curious to see if I’m prosecuted for a cowbell or a cooking pot,” he says.

The Ditib community could prevent this if it obtains an injunction from the local court to impose a restraining order. This means that Marcel Bauersfeld is only permitted to approach the mosque up to a certain, fixed distance.