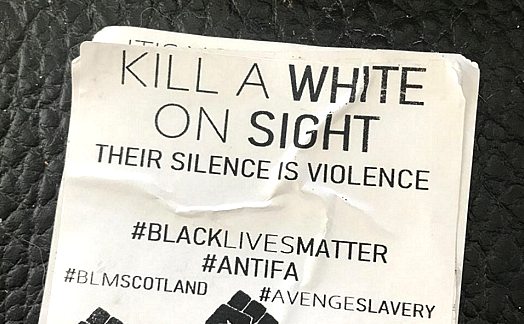 In case you haven’t noticed, it’s open season on white people. Black Lives Matter, but yours doesn’t, not if you’re white.

Readers may recall Johnny Williams, a sociology professor at Trinity College in Connecticut, who reacted to the shooting of GOP congressman Steve Scalise three years ago by posting that white people were “inhuman a**holes”. He said, “Let. Them. F***ing. Die. And smile a bit when you do.” To drive his point home he used the hashtag #LetThemF***ingDie.

Prof. Williams was suspended by Trinity for his tactlessness, but has since been reinstated.

More recently, after the latest BLM fad took off, Irami Osei-Frimpong, a University of Georgia teaching assistant and Ph.D. candidate in philosophy — of all things — wrote, “Some white people may have to die for black communities to be made whole… To pretend that’s not the case is ahistorical and generally naïve.”

The University of Georgia reviewed Mr. Osei-Frimpong’s behavior and decided that it warranted no disciplinary action.

It’s too early to say whether the more lenient treatment of Irami Osei-Frimpong is an outlier, or indicative of a trend. But one thing is for certain: the sentiments he and hundreds of other “activists” have been expressing are now being mainstreamed.

The “kill whitey” trope is nothing new — it has been publicly expressed in black radical circles since at least the 1970s. However, those who espouse it are now gaining significant political influence at the national level. All national political figures in the Democrat Party support the Black Lives Matter movement, as do all major academic institutions and almost all of the national media. Those same media outlets may not highlight the fact, but the same “mostly peaceful” BLM protesters they support are increasingly proclaiming their desire to assault, burn, torture, maim, and kill white people. Not just “racists” or “KKK supporters”, or “Trump voters”, but white people. Whites, it is averred, are irredeemably racist, genetically damaged, harmful to the species, and do not deserve to live.

Down there on the street, where the revolutionary communists — who are the organizing force behind BLM and Antifa — raise their clenched fists in silhouette against the glare of burning courthouses and police stations, the genocide of white people is one of the stated political goals.

Except for my slightly olive skin tone — which probably derives from an Indian in the woodpile on my mother’s side of the family — I’m a totally whitebread guy. I have no rhythm. I’m a traditional nerd. I like meatloaf and mashed potatoes. I listen to Baroque music because I love the way it sounds. And I enjoy sitting around with my nerdy white friends making stupid jokes.

Worse than that, I’m a full-on WASP. And, now that I’m old, totally without redeeming social value. A straight old white man, certain to be in the first tranche put up against the wall by the Social Justice firing squad.

So I’ve been watching with interest the growing prominence of the “White People Must Die” meme in the fever swamps of the alternative media. It makes me think about other well-meaning traditional white people, the kind who have always been scrupulously non-racist and truly believed in a color-blind society.

Assuming they’re paying attention, what are they thinking now? Because the spear point of the new Woke revolution doesn’t make any exceptions for being well-meaning. White people are destined for the dustbin of history, and this means YOU.

Maybe they think the death-to-whitey radicals don’t really mean it. Maybe the bellicose rhetoric is just designed to extort a higher price. Maybe if they just grovel a little more, and surrender more of their paychecks to fund “reparations”, all the screaming and burning and looting will die down and life can return to normal (except for having to wear a mask, of course).

Or maybe, just maybe, they’re edging towards becoming WAYCISTS. Maybe they’re realizing that white lives — their lives — really do matter. And, unless they can find some solidarity with their fellow whites, there will be no organized entity that will act to defend them.

Surely the BLM/Commie movement can’t intend such a result. It’s not in their interest to create a new cohort of white men consciously working together to protect their own race. Because even with their communist commissars, blacks in the USA are vastly outnumbered by whites.

Maybe the Revolution is counting on enlisting Hispanics and Arabs as allies in the cause against their common enemy. Once Whitey has been successfully exterminated, of course, the members of the black-brown consortium will have to work out among themselves which group will rule the roost.

My money’s on the Arabs. Ever since the time of Mohammed they have demonstrated that they have the shrewdness and ruthlessness necessary to overcome their erstwhile allies. And they have always reserved their worst treatment for black Africans, whom they believe to be their natural slaves, as decreed by Allah.

At least Islam gives you a choice: you can say the shahada and submit to Allah, or you can die. So when the hosts of Mohammed come marauding through your town, you can save your skin, even if you’re white, with La illaha ila Allah, wa Muhammadun rasul Allah.

But when the Kill Whitey crew arrives, there’s nothing you can do. You just have to die.

And what about the white communists who form the core of BLM, Antifa, and the rest of the Red alliance?

When the dream is finally realized, and the death squads are formed to exterminate white people, why should those honky commies be spared?

Do they believe their official Woke Certificates will guarantee their safety?

Or will plundering the vast wealth of Washington and Wall Street be enough to slake the thirst of the screaming brown hordes?

Maybe they don’t really think about such things. Maybe they subconsciously assume that when the new order emerges from the rubble of the Former United States, they will remain the commissars in charge, and continue to manage their negro subordinates, providing benign wisdom and guidance for those they consider inferior beings.

But it’s clear that the street-level “protesters” will be satisfied with nothing short of the total destruction of the existing order. I find it hard to imagine the forces behind the current madness in other than demonic terms. For whatever reason, evil Powers are being awoken and let loose in the land to wreak destruction and havoc.

I don’t think even the best-trained Marxist theoretician will be able to put that genie back into the bottle.

36 thoughts on “Awakening My Inner Honky”