Last Monday a young African culture-enricher terrorized everyone, and in particular one young woman, on a suburban train in Berlin. The video below shows what happened

The following article from Politically Incorrect (also translated by MissPiggy) describes what happened on the Berlin S-Bahn:

Martyrdom of a young woman in Berlin’s S-Bahn — Where nobody helps!

By EUGEN PRINZ | A mobile phone video that was recorded on the 29th of June in a Berlin S-Bahn [suburban train] compartment near the Gehrenseestraße stop makes it shockingly clear that unaccompanied women in Germany have become helpless fair game. It also shows how little hope the victims have that someone will come to their aid.

The video sequence begins with pictures of a nearly empty S-Bahn train compartment. Near the front exit of the train compartment we can see M.B. kneeling. She’s kneeling because she being harassed. In desperation, she is on the ground next to her family dog. Standing in front of her is a highly aggressive black man in a red t-shirt, shouting at her and calling her names.

Cries for help are not heard

The kneeling young woman keeps calling for help, while the few people in the compartment stand around indecisively. Only one young man, with wild curly hair and wearing light brown trousers, hesitantly tries in vain to verbally appease the aggressor, who is completely out of control.

When B.M. tries to stand up again, the black man stomps back over to her and shouts: “I’m f***ing your mama!” The girl fearfully holds her hand in front of her face in anticipation of being beaten.

“Can you help me, please?”, she implores the curly-haired man. The black man insults him with the words “You bastard”. When the girl tries to create distance between herself and the black man, he shouts at her several times: “Come to me! Come on, come to me!” and “You’re nobody!”

“You’re nobody!” — (Information for a Bio-German from a asylum seeker)

While this is happening, in the foreground of the video, we can see how one of the passengers, a burly-looking young man with a backpack and white shorts, quietly and inconspicuously moves from standing at the far right end of the compartment to the nearest exit without making any effort to help the young woman.

A few seconds later the S-Bahn stops at Gehrenseestraße station. The man with the backpack leaves the compartment without further concern about what was going on just a few meters away from him. Near the exit where the young girl is standing, the sliding door of the carriage also opens. The black man uses this opportunity to push his victim out into the open with full force. The young woman is desperate because her dog is still in the carriage. Despite the presence of the attacker, she tries to get back into the compartment to her dog. This leads to further scuffles. The woman pleads more and more desperately:

Shockingly, in the background you can see that the strong, younger passenger in white shorts and with a backpack, runs away from the fight, but out of curiosity, comes back when the black man is no longer there.

How anyone can ever look at themselves in the mirror again after such behaviour is a mystery to the author.

Only the younger man with the curly head tries to dissuade the black man from his actions with a repeated loud “Hey, hey, hey”.

Luckily, the aggressor leaves the S-Bahn compartment and makes his way to the stairs of the Gehrenseestraße stop.

In the meantime, the victim of the crime has made a statement on Facebook about what had happened earlier:

Apparently there were also Facebook commentators who criticised the victim’s dog. Here too, the young woman had an answer:

Many thanks for the ‘Get well soon’ wishes. However, I would like to address the people who think that think my dog should have intervened. I am HAPPY that he didn’t do anything! The guy was absolutely crazy and we were locked in the moving train. I don’t know what would have happened to my dog, my best friend and a living creature for whom I have responsibility! I wouldn’t have been able to forgive myself if something happened to him! My animal is my friend and not my weapon! Thank you very much!

In the meantime, the Federal police have announced that the suspect has already been identified: 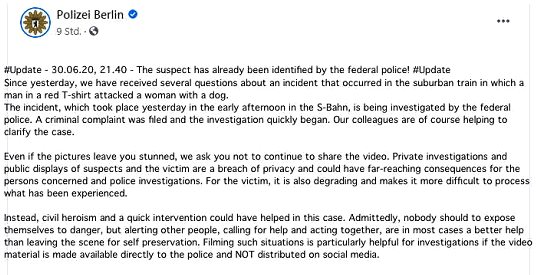 Of course, we agree with the request of the Federal Police not to distribute such videos on social media in the future, so that it can be reported that Merkel’s guests who are turned into “men”, “party-goers”, or “aggressive mob” (see the Berliner Zeitung‘s coverage of the incident).

And yes, that was meant sarcastically. It’s good that such videos are put on the net, so that the narratives about “party-goers” and the like can be counteracted.

This video shows what the Merkel government did to this country. What we have seen here is not an isolated incident, but almost normality in the suburban trains and public spaces of our big cities. The big losers from immigration are women. It is a mystery why so many of them have not yet realised this. Moreover, these pictures show that many German men have degenerated into pitiful cowards who have nothing, absolutely nothing, to oppose the wolves among the immigrants.