The BLM protests about the death of George Floyd in Minneapolis are convulsing Western Europe, just as they are the UK, Canada, Australia, and the USA.

Today in Düsseldorf a supply of cobblestones was placed conveniently near the demonstration site in a construction area where the street had been opened up. The situation provides the paranoid mind with ample food for speculation about how the projectiles came to be placed exactly where they would be sorely needed by the “anti-fascists” later in the day. The directive to open up the street would have to come from at least the level of the municipal government. Who ordered it? Did he or she know the ultimate disposition of the cobblestones?

The thing is, the same convenient placement of bricks and cobbles has been observed and photographed in Berlin, Bremen, Cologne, Hamburg, Karlsruhe, Mainz, Mannheim, Wiesbaden, and other German cities.

The video below is from Karlsruhe. Many thanks to MissPiggy for the translation, and to Vlad Tepes for the subtitling:

The second video is a compilation of photos and footage of cobblestone supplies at various locations in German cities. Many thanks to Vlad Tepes for editing and uploading it:

MissPiggy was in downtown Düsseldorf this morning, in the immediate area where today’s demonstration was scheduled to take place. She sent this report:

I just dropped my daughter off for her first aid course at the Main Train Station in Düsseldorf. We got there a little early to check out the scene in front of the main entrance. 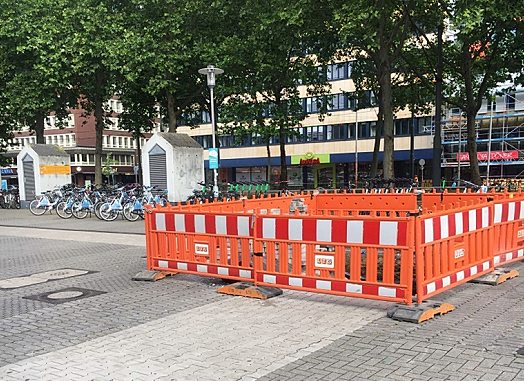 Lo and behold, the brick fairy had been there. We took pictures of the nice pile of bricks from the conveniently timed “construction”. 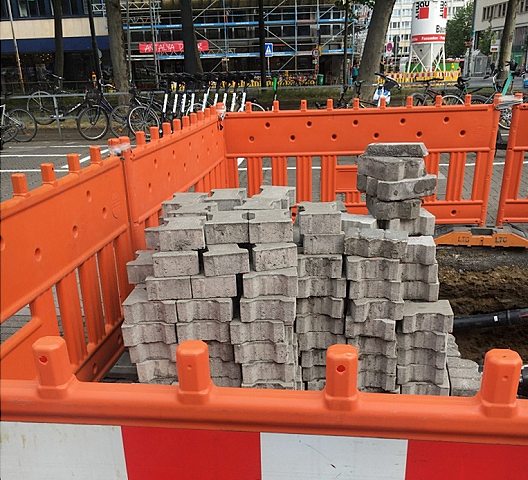 I asked the first aid instructor what security measures he would be taking for the demonstration today. He responded with, “What demonstration?”. He was uninformed and disinterested. His response was, “Let them demonstrate.”

I asked the barista at Starbucks if he knew about the BLM demonstration at 2pm. Nope.

I went up to a police officer. He was the only one that knew about it. I saw several police patrolling already at 8:30 in the morning.

My conversation with the police officer was interesting. I told him my daughter was taking a First Aid course today until 4pm. I asked if he knew when the demonstration would be over, and what area would be blocked off.

He said he wasn’t psychic, and it all depended on the demonstrators.

I asked him about whether the demonstration was registered and if there wasn’t a specific time period for demonstration to end. Same answer.

I told him my husband would be picking my daughter up and asked if he could tell me which street would be blocked off.

He couldn’t (wouldn’t) tell me, and suggested my daughter take public transport home or that we pick her up somewhere else in the city.

I asked if the demonstration will only take place in front of the train station.

He said that depended on the demonstrators.

I asked if the police wouldn’t make sure they don’t leave the area.

He said that the police wouldn’t contain them because that might provoke a violent reaction.

I mentioned the pile of bricks. He said the police assume that it will be a “peaceful” demonstration.

I retorted with, “Like in the U.S.? Eleven people died.”

He repeated, “We assume it will be peaceful.”

He said, “Then there will be ugly pictures on the news tonight.”

There’s more at Vlad’s place, including additional photos and videos.

9 thoughts on “You Deserve a Brick Today”