I went on an outing this afternoon to Kroger and Walmart in Appomattox. I had been dreading the trip, because it was my first venture into the larger Coronaworld since Governor Ralph “Coonman” Northam issued his ukase making the wearing of masks mandatory in public places. Like all the other li’l Stalins, the rules don’t apply to Coonman, as he made plain in a now-infamous selfie taken with one of his fans in Virginia Beach a couple of weeks ago: 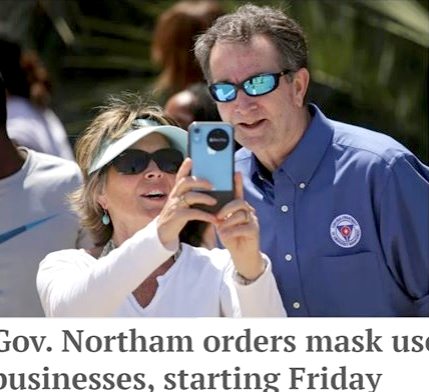 How’s that for social distance, eh?

Anyway, I needn’t have worried: masking was not being enforced at Kroger and Walmart. The Corona Hijab was much in evidence, however: About 85% of people I saw were masked. Nevertheless, the atmosphere was very relaxed, much more so than it was back in April, when fewer masks were to be seen. None of the mask-wearing people appeared to care whether anyone else was wearing a mask.

The mask seemed to be a signal of compliance with the new social norms, rather than the action of the fearful. It’s as if people were saying, “OK, I’ve done my duty and put my mask on. Now I can go shopping and behave normally.”

Social distancing was not well observed, as demonstrated by a little vignette in the produce section of Kroger. A young housewife wearing a mask was picking through the onions while I waited patiently at the prescribed social distance so that I could pick through the potatoes. A man, also masked, came up from behind and lightly bumped into the woman. She turned around, and exclaimed with pleasure: evidently they knew one another. They chatted for a couple of minutes, standing at the usual distance two good friends would use, maybe two feet (60 cm) apart. Then, when they said goodbye, the young lady playfully punched her friend on the shoulder.

All while masked. It’s a good thing no COVID patrols were nearby, or the two would surely have been cited for their heartless indifference to the health of others. And I also would have been cited, of course, for not wearing a mask — obviously, I wanted everyone around me to die.

Masks were a long time arriving out here in the boonies. A couple of months ago, when the hijab-rate in Whole Foods in Charlottesville was over 75% (it’s now close to 100%), there were very few masks to be seen here in the sticks. But today they were everywhere.

We lag behind in all social trends, so I expect to see masks on customers in Food Lion long after the fad has been abandoned in the big cities.

One final note: Given the current state of race relations in the major cities, I wondered if I would notice any tensions in Appomattox. The “protesters” have been burning and looting in Richmond and Virginia Beach for several days, and there has even been property damage in Lynchburg, which is just a short drive west on US 460 from Appomattox.

But I experienced nothing out of the ordinary in my interactions with people in Kroger and Walmart. The population of the area is at least 50% black, and there were a lot of black employees and customers, especially in Walmart. All my exchanges with black people were cordial; employees were uniformly friendly. I saw no glares or sullenness directed at white people by black shoppers. Everything was completely normal, which was a relief.

I wouldn’t want to visit a Walmart in downtown Philly or Atlanta right now; it might not be a prudent move. But at least the situation is calm out here in the benighted hinterland. Perhaps not for long, but it’s OK for now.

It seems appropriate to quote Louis MacNeice again (from “The Hebrides”):

On those islands
Where no train runs on rails and the tyrant time
Has no clock-towers to signal people to doom
With semaphore ultimatums tick by tick,
There is still peace though not for me and not
Perhaps for long — still peace on the bevel hills
For those who still can live as their fathers lived
On those islands.

9 thoughts on “Maskless in Walmart”