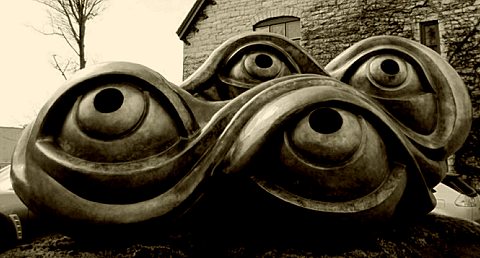 Long-time readers may recall that I am afflicted with wet macular degeneration (central serous choroidopathy) in my left eye. The condition first appeared more than seven years ago, and has been kept in check by an intermittent series of injections in that eye. For which I am grateful, because until a dozen or so years ago, there was no known treatment for wet macular degeneration.

After the most recent stabilization of the eye, I had been able to go for months without any injections. Unfortunately, about a month ago I started noticing the unmistakable symptoms of a recurrence of the condition. It causes visual disruptions near the fovea of the eye, meaning that the two eyes no longer work together properly, and are always tired and irritated. Back in 2013 I fashioned a patch that could be attached to one lens of my glasses, and worked one-eyed for awhile. If this flare-up had continued much longer, I probably would have had to do the same thing again.

Under normal circumstances, I would have called the retinal specialist’s office and made a special appointment to go in. However, the Coronamadness precludes such appointments — Emergencies Only; otherwise do without. So I decided to tough it out, and waited until my regularly scheduled two-month checkup, which was this afternoon.

When he saw the results of my scan (those scanning machines are amazing), the doctor agreed that I needed to start the injections again. So I’ve had a rough few hours, and now the dancing air bubble is here, flitting around in front of the screen like one of those bouncing balls over the song lyrics in an old movie.

A needle in the eye is horrible, but I can tell you that after you have lived for a few weeks with the symptoms of macular degeneration, you actually kind of look forward to it. Based on my experiences on the two previous occasions (2013 and 2018), the worst of the visual distortions will recede within a few weeks. The downside, of course, is that I have to get an injection every month for an indefinite period.

After I came out of the doctor’s office this afternoon, when I was crossing the parking lot to my car with two sets of temporary sunglasses over my eyes, I realized that I was missing Dymphna more than I had at any point since last summer. During the previous two series of injections, after each treatment I would return home in misery, and she would be there waiting for me, ready to offer sympathy, fix me food, and generally take care of me until I recuperated.

Today I came home to an empty house with a dancing bubble in front of me. I fixed myself a drink, and then lay down with a pillow over my eyes until I was able to focus on the screen again.

So posting is somewhat light this evening. There will be a news feed, and possibly also another post, but possibly not.

8 thoughts on “Getting an Eyeful”