Below is the most recent installment in Seneca III’s latest treatise. See the archives link at the bottom of this post for previous installments in this series.

Part III — Of times past and modern parallels

Times can and do change drastically, often after great events that upturn the lives of vast numbers of people. And so it shall soon be for us as we fight our way out of this Covid debacle, an event which has been as badly mismanaged as was the advent and conduct of the Great War 1914-18, which saw the end of the Edwardian era and kick-started the 20th century. 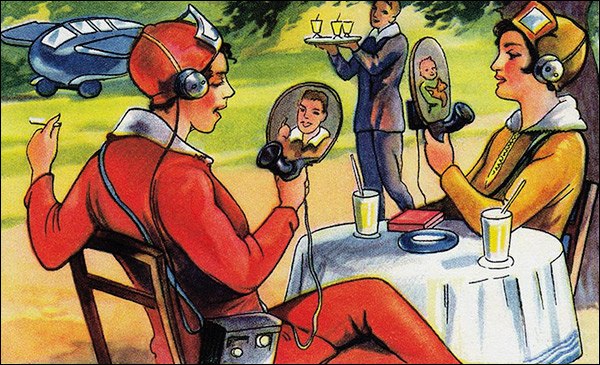 I found this visual vignette on the Woodpile Report sometime last year (although the link no longer seems to work) and it has fascinated me ever since. Every time I look at it, it seems to encapsulate a time different from ours and yet in some ways not so distant or different despite being separated by nearly a century. No date came with it, but there are clues aplenty, and it provides an interesting look into the prescient mind and times of the graphic artist who committed it to posterity.

The artist went to some length to emphasize that the ‘boisson du jour’ was lemonade so we can assume that we are looking at a time during the period between 1920 and 1933. The Volstead Act[1] (ratified on January 16th 1919, came into force on January 29th 1920) was a statutory ban on the production, importation, transportation, and sale of alcoholic beverages designed to provide enforcement for the Eighteenth Amendment to the Constitution. The 21st Amendment, which repealed the 18th, was ratified on December 5th 1933… and a very Merry Christmas for America.

Starting in the top left-hand corner we see a small aircraft with what appears to be the aerodynamic characteristics of a house brick, despite the semi-streamlined overall shape. What purpose the mudguards were meant to serve is beyond me, although they do have a vague aerodynamic shape to them. The rear of the aircraft is obscured by the head of the woman in red, so we cannot determine what form of propulsion the artist had in mind. Also note that the cockpit/passenger cabin is fully enclosed and windowed. This does not provide any clues to the exact time as the first airplane with an enclosed cabin appeared in 1912, the Avro Type F, and during the 1920s there were many passenger aircraft with enclosed cabins. 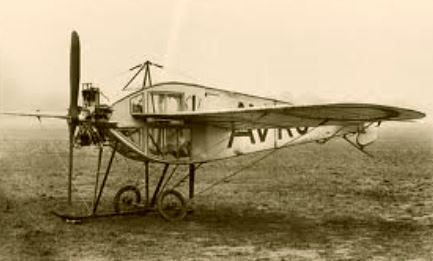 The largest impediment to having closed cockpits/cabins was the material used to make the windows. Prior to Perspex becoming available in 1933, windows were either safety glass, which was heavy, or cellulose nitrate (i.e. guncotton), which yellowed quickly and was extremely flammable.

Hence we shall have to look for other clues if we wish to pin down the precise period, although the fact that the women are wearing goggles would suggest a time in the mid to late twenties, when the movement from open to enclosed cockpits was well afoot but open cockpits were still far from obsolete. The clothes the women are wearing[2] are a different matter, and very much of their time, so let us have a look at their outfits and see what we can determine there.

First, observe the waitress in the middle ground. Bearing in mind that as I am far from being an expert on haute couture, I will happily accept a different opinion on this subject from anyone who is au fait. The simple two-piece includes slacks (trousers), just as the two main characters are also wearing, and which prior to WWI were seriously frowned upon in certain circles. That and the rather butch hair-do the waitress is sporting clearly signal that post-war female emancipation had come to stay and, of course, the liberal application of rouge to women’s cheeks is very much a thing of that time.

That was that generation, so what now of ours, I wonder?

Back to the main theme

The two women in the foreground are using devices that were yet to come. The artist must have been very far-sighted to hypothesize in such a way… or was he or she simply looking at technical developments during that period and then extrapolating?

The arrival of mobile (cell) audio-phones, and then later with the addition of colour screens, was far in the future, in fact such speculation was only found in the realm of the lurid pulp science fiction of the time. It amazes me that he or she was not that far off in that prediction, fact when one considers that the technology extant then — headphones, a microphone, a flat screen (that was far, far in the future) and a transportable battery pack to power them — were all there before the days of Silicon Valley, electronics, lithium batteries and the consequent step-by-step miniaturization of everything through the development of solid-state architecture.

The earphones and microphone

The hands-free assembly seen in the picture below was widely used by the old style plug-and-connect operators in centrally located switchboards using the electromechanical automatic exchanges first developed by Almon Strowger in 1888, and which gradually replaced manual switchboards in central telephone exchanges around the world. These exchanges were soon connected, eventually forming an automated, worldwide switched telephone network. 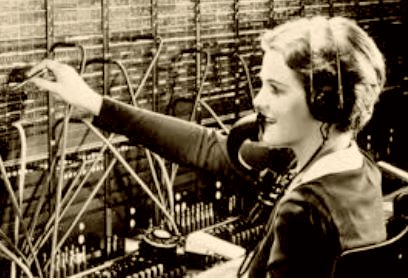 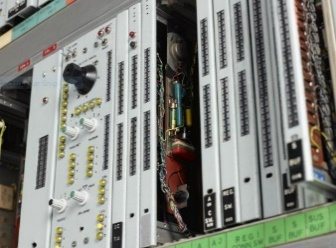 Previously, the first ever telephone call had taken place on 10th March 1876, a few days after the Scottish-born inventor Alexander Graham Bell received a patent for the device. The first long distance call between New York and Chicago was made by Bell himself in 1892. 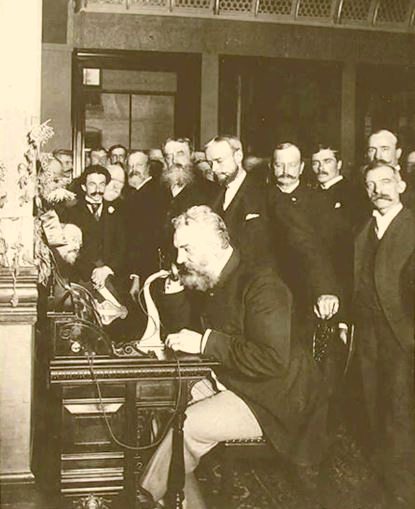 By 1998, there was one landline phone for every man, woman and child in the USA.

People of my generation will remember the first mobile telephones. This photo shows a model similar to the first one I owned, which could also be hardwired to charge and operate in a car — if you could get a signal: 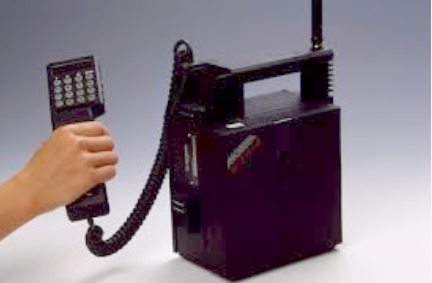 In both cases the majority of the space was taken up by the battery. Battery technology was still not that far removed from that of the ’30s & ’40s, and the batteries were heavy, clunky, had a short operating life and a long recharging time.

And that leaves us with this to contemplate…

…the small, flat, oval screen which was definitely a thing of the future, and if we can track that idea back to its origins in the TV industry, it might give us a clue as to a more precise time when the artwork was created.

Early experiments into television date back to the late 19th century. For example, a young German university student, Paul Julius Gottlieb Nipkow, proposed and patented the Nipkow disk in 1884. This was a spinning disk with a spiral pattern of holes in it, so each hole scanned a line of the image. Constantin Perskyi had coined the word television in a paper read to the International Electricity Congress at the International World Fair in Paris on August 24, 1900. John Logie Baird made his first appearance in the public eye… 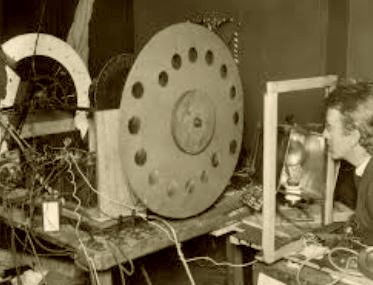 The first demonstration of the near-instantaneous transmission of images was by Georges Rignoux and A. Fournier in Paris in 1909. A matrix of 64 selenium cells, individually wired to a mechanical commutator, served as an electronic retina. The receiver, a type of Kerr cell, modulated the light and a series of variously angled mirrors attached to the edge of a rotating disc scanned the modulated beam onto the display screen.

In the USA more and more television experiments were conducted, as early as 1926 using a combined mechanical Nipkow disk and electronic Braun tube system, later switching to an all-electronic system in 1935 using a domestically developed iconoscope system. This report in the MSM of the time could well be what caught the artist’s eye:

“Two major advances in television were announced yesterday by a young inventor who has been quietly working away in a laboratory in San Francisco and has evolved a system of television basically different from any system yet placed in operation,” The San Francisco Chronicle reported on Sept. 3, 1928, in the main story on the front page. “The inventor is Philo T. Farnsworth, and local capitalists, headed by W.W. Crocker and Roy N. Bishop, are financing the experiments.”

Farnsworth, the paper reported, had eliminated the moving parts previously thought necessary for television, and “shortened the wave band length” to keep TV broadcasts from interfering with each other. In short, he was on his way to turning a motorized device into an electronic one. 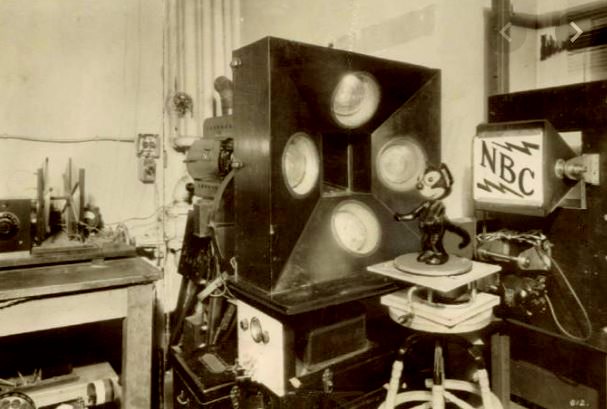 And there ends our journey into the past. I will stick my neck out and suggest the lead picture in this article was drawn and published sometime between 1926 and 1929, but I do stand ready to be corrected.

Finally, looking back, my pressing thought is: Perhaps after this we have in some small way become more aware of the ways of the world and the cycles of history. Perhaps it is now time to address the question “So what now for us as we move into another era as did the people whose story we have just briefly explored?”

In Part IIIA I shall commence that journey.

— Seneca III, this seventeenth day of May in the year of our Lord 2020

6 thoughts on “Signs and Portents Everywhere… But of What? (Part III)”