Our Bangkok correspondent H. Numan sends his take on the ChiCom flu and related matters. 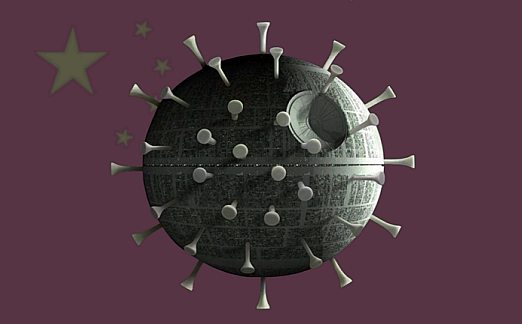 Is China going to trigger a world war?

We don’t quite know (yet) what caused the Chinese virus. Probably it comes from an infected bat, butchered and sold for food on an extremely unhygienic open air market. I know all about street markets. We have plenty of them in Thailand. Only with some standards of hygiene. You cannot butcher on the spot for example. In China, no such rule. Hygiene was never butchered. You can’t butcher what ain’t there, right?

We hear plenty of silly conspiracy theories these days. I get really sick of all the nonsense people dump online about Bill Gates, Soros and NWO. If aforementioned were only 5% as effective as those really dumb people claim, they would have achieved their goals a long time ago.

Another theory is that this Chinese virus didn’t start on a market, but in a nearby laboratory. Not impossible, but highly unlikely. Given that the POTUS makes such claims, I very humbly have to debunk it. I attended the NBC (Nuclear, Biological and Chemical warfare) school in the army. My instructor began by telling us how truly horrible those weapons are and how little we can do against it. Actually only against N weapons. Only within the army itself, and with very limited effect. Forget the civilian population. Y’all gonna die. Sorry about that.

It is technically impossible to prevent. We simply don’t have the resources for it. What we learned is how to detect it, and how to clean up yourself and your equipment after an N or C attack. There is no protection against B weapons at all. None whatsoever.

A nuke explodes, that is it. Huge damage, and for a limited time, radiation. You can treat survivors immediately, and some infrastructure will remain intact. Large scale chemical attacks (most of them) cover large areas for weeks up to months. Whole areas or even entire countries will biologically die. Most life dies. Plants, insects and animals. Everything. For example, a large scale chemical attack on military installations in Germany would basically exterminate all life in central Europe. The unlucky survivors would slowly die of starvation and lack of medical facilities. Even clearing paths to walk on safely would be a huge effort. Months later gas would still stick to fences, leaves, in puddles, in houses and in cellars. Merely touching it would kill you. All life, plant life, insects and animals would have to be re-introduced to start life again. Forget about restarting civilization. Europe would be a literal valley of death.

The worst of all are biological weapons. This Chinese virus is relatively mild. Moderately contagious, but not very deadly. Yet this relatively mild virus spread like wildfire around the globe. The real danger is in overloading the medical system. Once you catch it, you need to be hospitalized. We simply don’t have that many hospitals or equipment to help everyone. That’s why this pandemic is so deadly and dangerous.

Again, this is a fairly mild virus. Imagine — better not do that — something designed in a lab that’s not so innocent and much more contagious. Such a virus would not be easy to counter. Designing a deadly virus is one thing. Designing one that only kills what you want or to have an antidote for your own population is quite another. Even if a vaccine is possible, inoculating 1.5 billion people is a massive undertaking.

Okay, now you have a bit of a background. Given the enormous dangers, I doubt very much if the Chinese government intentionally spread the Chinese virus.

The keyword here is intentionally. By playing it down when the virus emerged and hushing it up it when it did, they most certainly caused the entire world untold hardship and damage. China is not a democratic country. It never ever was. China is one of the oldest civilizations in the world. It used to be an empire for millennia. After a period of civil unrest it became a military dictatorship and then a people’s republic. Long periods of unrest are nothing new in China. They had many. Some lasting for centuries. The Warring States period, for example. You probably think WW2 was the worst in human history. Nope. That was the Taiping rebellion, in China. About 30 million people died of unrest and (mainly) starvation. No nuclear or automatic weapons were necessary. Later chairman Mao caused 15 to 45 million people to starve. Chinese know all there is to know about difficult times. And… how to make the best of any crisis. As they’re doing right now.

Is the current crisis intentional? No. Is China abusing the situation to take advantage of it? You bet! Compare it with a serious car crash. A driver makes a mistake, and causes an accident involving many cars, with lots of victims. Was it intentional? No. However, if that driver immediately denies any responsibility, charges money for using his first aid box, puts the blame on others, and tells everybody he is actually the hero, that changes this story a lot. Any judge will take a very dim view of such behavior.

When the crisis began, governments of the world looked to the WHO for advice. This organization has been bought by the People’s Republic of China. Admitted, America foots the bill ($450 million), and China only $10 million (now $50 million). How much the Chinese spent on buying the entire top of the organization is not known. A lot less than $50 million, that much is certain. Kind of funny, if you think about it. America pays for everything, and is vilified. China spends a fraction — but they buy the right people — and becomes a hero. ALL top doctors of the WHO, no exceptions, have nothing but praise for China.

Oh, before I forget: Tedros Adhanom. The big boss or comrade chairman of the WHO. They didn’t have to buy him. He began his career as a (Chinese) communist. He’s a doctor, all right, but not a physician. He holds a doctorate in medical sciences; that’s not quite the same. He was minister of health under the vilest regime Ethiopia ever had. Where he suppressed news of several cholera outbreaks. A regime supported by guess who? Why, China of course! After that he was promoted by Beijing to head the WHO. No need for bribery, he’s a party member of long standing. The other ‘doctors’ are bought, but not him. They only need to bribe the top. You don’t need to bribe everybody. A sincere doctor in a lower position makes the organization more believable.

Paying even part of the damages is absolutely not on their agenda. China is putting a lot of diplomatic pressure on Europe right now to silence those who want to talk about responsibility and damage payments.

During this crisis the Chinese government sold their stockpiles at a profit to countries in need. Much of that stockpile was defective. Their quality control is like democracy: not made in China.

At this moment Chinese companies — you can read: the Chinese government — are quietly buying whatever they can in Italy and elsewhere in Europe. As they did during the Greek debt crisis. A lot of Greece is now owned by China. Don’t be too surprised if one of these days the Chinese fleet anchors in Piraeus. It’s theirs. In Holland and elsewhere in Europe China tries to buy strategically important businesses. China tries in particular to buy maritime companies now in trouble due to the Chinese virus crisis. The Dutch government just forbade them to take over a shipyard.

To finish off, did China use biological weapons to cause the crisis? Effectively it doesn’t really matter. For all practical purposes they did. Partly because they don’t want to lose face by admitting guilt. That’s a huge no-no in Asia. Partly because they are Chinese. The Chinese tell the world what to do, not the other way around. And simply because it’s an opportunity. To be used and exploited for those who see it.

Don’t be misled by the Opium Wars and later on. That’s an exception. Normally China isn’t keen on being bothered by outsiders. It happens, hence the Great Wall. Or Great Walls in plural. They built many. Until about 1600 China was the world leader in … everything! Those Opium Wars only happened because China wasn’t interested in cheap European muck. China exported lots of things to the world, such as tea, silk and porcelain. They weren’t interested in importing what they saw as junk from Europe. Just pay in silver. That was not possible. Europe had lots of cheap cotton to pay with, but not that much silver. And they had opium… the rest is history.

There is a lot more to be told about China, such as the Belt and Road project or the troubles in the South Chinese Sea. Where tensions are rising, not lowering, due to the crisis. But that is too much for just one article.

Both Europe and America have to respond to China. Decisively and fast, at that. I expected China to become a huge problem after I’m long dead. Say 20-30 years in the future. This crisis is a crisis for us, and a huge OPPORTUNITY for China. They milk it until the cow runs dry and begs for mercy.

Europe and in particular America will have to treat this as an premeditated attack with biological weapons, otherwise there won’t be a Europe or America in the very near future. It doesn’t matter a lot that they factually didn’t use biological weapons, as they are acting exactly the same. We have to respond to that. If the USA (I doubt it) and Europe (I’m certain of it) were to treat this as an oopsie, then effectively China has become the de facto word power. Right now. In 2020.

25 thoughts on “Is China Going to Trigger a World War?”