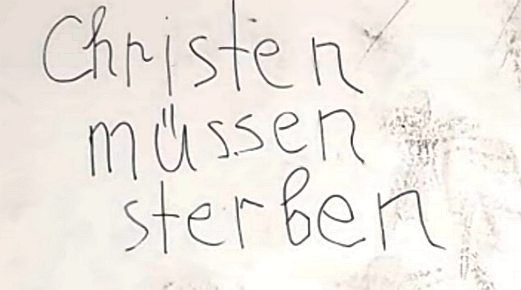 The following video is a representative slice (so to speak) of Modern Multicultural Europe — a “Danish” imam, speaking in Arabic, subtitled in French, and then translated into English for additional subtitling.

The imam is calling on Muslims to unite so that they can fight jihad in the way of Allah and conquer Europe for Islam.

On a similar note, here’s a brief news item (also translated by MissPiggy) from the local Austrian news outlet meinbezirk.at reporting on the graffito pictured at the top of this post:

Austria, LILIENFELD COUNTY. This graffito has rightly caused a lot of excitement. The lettering “Christians must die” (“Christen müssen sterben”) can be seen at the Traisen-Markt train stop. Above it, in the same style, the words “Allah Akkbar”. The removal of the graffiti has already been initiated and will cost about €500.

18 thoughts on “Christians Must Die!”