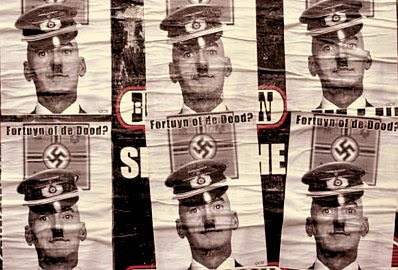 In 2002 the Dutch politician Pim Fortuyn was the leader of the party Leefbaar Nederland [Livable Netherlands]. During the 2002 election campaign Mr. Fortuyn called Islam a “backward religion”. He was dismissed as party leader shortly afterwards, and immediately founded the Lijst Pim Fortuyn [List Pim Fortuyn]. At the time he was the most popular politician in the Netherlands, and might well have become prime minister.

Pim Fortuyn was assassinated in Hilversum on May 6, 2002. An environmental extremist named Volkert van der Graaf was convicted for the murder and sentenced to eighteen years in prison. He was released on parole on May 2, 2014, after serving two-thirds of his sentence, as required by Dutch law.

Now that the full term of his eighteen-year sentence is nearly complete, Mr. Van der Graaf’s parole/probation is about to come to an end. The following article from De Dagelijkse Standaard concerns the reaction of Mr. Fortuyn’s family to the imminent freedom of Volkert van der Graaf.

Many thanks to FouseSquawk for the translation:

[Note: According to the Dutch word proeftijd, van der Graaf has been on probation. We would consider it a parole.]

For the family of Fortuyn, it is incomprehensible that Volkert van der Graaf will soon be completely free to walk the streets without supervision. According to them, the man is still as dangerous and unpredictable as ever. Nevertheless, Van der Graaf will shortly enjoy his complete freedom. Meanwhile, the Netherlands must still do without the Great Pim.

Joost Eerdmans finds it unbelievable that the family was not informed of the pending end of Van der Graaf’s probation.

“The family has not even been informed by the Public Prosecutor’s Office of the expiration of probation.”

Simon Fortuyn, Fortuyn’s brother, finds it disgusting that such a radical figure now disappears from the radar. Nobody knows what Van der Graaf will do now, and nobody is in a position to control him.

“A fox loses its fur, but not its tricks. This man is deadly dangerous and needs to be watched. In the last eighteen years this “jellyfish” has taken a run at everything and everyone, most of all at the Public Prosecutor.”

There are still some simple restrictions on Van der Graaf until May; from then on, he is once again a free man. It remains inexplicable that someone who committed such a serious crime — in fact, an attack on freedom of speech — nonetheless gets such a mild punishment. It is indeed inexplicable for the family that they have not been told that the murderer will soon be completely free again.