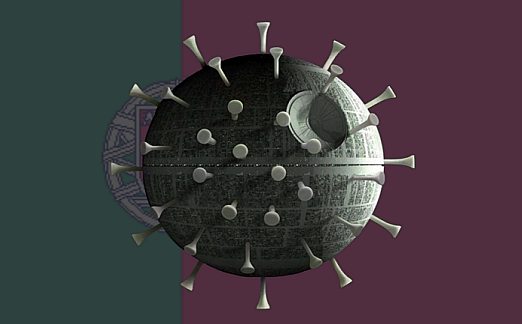 A hostel for migrants in the Portuguese capital of Lisbon recently experienced an outbreak of the Wuhan Coronavirus. While inmates of the facility were being tested for the disease, 19 of them reportedly disappeared and could not be located. However, officials responsible for the care of migrants said that the missing youths hadn’t really disappeared; that they (the officials) knew where they were the whole time.

Many thanks to FouseSquawk for translating this article published yesterday in the Portuguese daily Público:

The Portuguese Council on Refugees (CPR) states that in spite of the fact that 19 persons were not in the hostel on the day coronavirus tests were done, “they were immediately located, that some had already been tested, and others were in the process of being tested.” The Defense Ministry says that ASAE inspected the location, and “all indications are that the conditions were not in accordance with the criteria that we established.” The government is reviewing the model of reception of these citizens.

The Portuguese Council on Refugees states that it did not lose track of 19 migrants who were housed in the hostel in Morais Soares, in Lisbon, where it was confirmed that 136 were infected with SARS-CoV-2, the virus that caused the Covid-19 pandemic.

In a statement the CPR states that in spite of the fact that 19 persons were not in the hostel — or pension — on the day the tests were done, that unit and the Aliens and Border Service (SEF) “proceeded to their immediate discovery, having already tested some and being in the process of testing others.”

The applicants for international protection “during the entire proceeding have a regular status in Portugal,” that unit states. “The arrival lists are updated regularly, being that any applicant for international protection has freedom of movement in Portugal. They are not obligated to stay in the same municipality all of the time, but have to keep SEF informed of their whereabouts under the terms of the Law of Asylum.”

In accordance with the Law of Asylum, social and housing support “is assured only to those who are in a situation of economic need, with this support ceasing at any time in which the conditions are no longer verified,” it further explains.

Monica Farinha, the chairwoman of the CPR, told Público that “there are no missing persons in Lisbon; it is known who they are and there is a process going on.” The Correio da Manhã reported this Wednesday that 19 (persons) had fled the hostel, which they had left without justification.

In the CPR facilities, there are 199 asylum-seekers: 99 spontaneous, 73 under the Resettlement Program, and 27 minors. Scattered through different hostels and other residences in Lisbon— the CPR does not disclose how many— there are approximately 800 asylum-seekers. “The authorities— Ministry of Internal Administration (MAI), SEF, Social Security, and Holy House of Mercy— are informed of their whereabouts and the reception is not only focused on support from CPR,” it said.

However, the air base at Ota received 169 of the migrants who were housed in the hostel of Morais Soares Street — the 136 who tested positive, 7 whose results were inconclusive, and 26 whose results from the tests were negative. The Minister of Defense, João Gomes Cravinho, stated in a visit to Ota on Wednesday that within the group were citizens of 29 nationalities, 1 stateless, and that a majority are of African origin. “We have no knowledge of any situation like this,” he stated. The Authority for Alimentary and Economic Security (ASAE) is handling inspection of the hostel, and according to the minister, “everything indicates that the conditions are not in accordance with the criteria that we established.”

The hostel was subjected to a disinfection. This Wednesday, the director-general of Health, Graça Freitas, stated that the migrants who are at Ota have mild symptoms. “They are all in good health.” She further said there is a recommendation for the de-concentration of people in locations where it exists. Graça Freitas added that more tests were done in other locations but did not specify which.

Also in Ota, the Secretary of State for Integration and Migration, Cláudia Pereira, says that the

government is reviewing the reception model for asylum-seekers and refugees, “the future immigrants who contribute to the economy in Portugal. We are analyzing these conditions, and a secretary of state has been created to improve these conditions,” she stated. She recalled that all immigrants are exempt from out-of-pocket health fees in cases of Covid-19, whether or not they have regular status.

At Lusa Agency, the president of the Parish Support Council, Margarida Martins, reported Monday on the situation that existed in that pension, and demanded an inspection. “We should demand that the ASAE check out this situation. It is impossible that in a pension with 40 rooms there are 200 people. It should be an obligation for the state not to let things arrive at this point,” she said.

However, it is not known in how many more hostels or pensions the migrants are housed, in what conditions they are in, and whether they have been subjected to some form of monitoring. Neither SEF, CPR or MAI are releasing information about this. Eduardo Cabrita, Minister of Internal Administration, said at Algarve this morning that the development of tests in this type of pension is a priority, just as happens with homes. In the next few days, he added, an intervention is planned in other, smaller housing units, all in the Lisbon area and covering about 500 people.

Alexander Kpatue Kweh, the coordinator for Refugee Forum, a project of the Union of Refugees in Portugal, told Público on Tuesday: “Back in December we alerted all the institutions about the complaints that we received about the overcrowding of the hostels,” he said. “The refugees are not able to speak with the institutions, so they come and speak to us,” sums up the official, assuming that these alerts have not borne fruit. “Unfortunately, it has come to this.”

Among the 169 persons who were housed at Morais Soares, and who since then were transferred to the Ota Air Base, “the vast majority had their application for protection not approved, having filed an appeal under the terms of the law,” CPR informed Público on Monday. A smaller group was found to be in the admissibility phase,” the agency added, pointing out that housing at Morais Soares was operated by CPR, “with knowledge of the partner entities”— Social Security, Service for Aliens and Borders (SEF) and the Holy House of Mercy of Lisbon (SCML).

5 thoughts on “Migrants Go Missing During Coronavirus Testing in Lisbon”