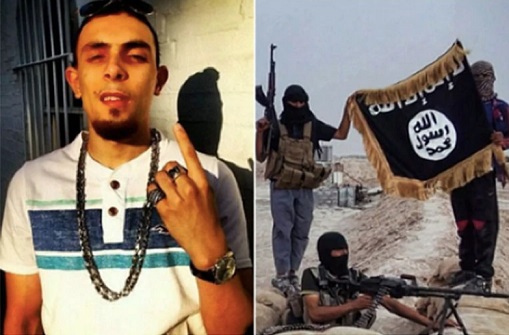 A young “British” man named Abdel-Majed Abdel Bary was arrested last week in Spain on terrorism charges. Mr. Bary had been in Syria for several years fighting jihad in the way of Allah before taking up residence in Almeria. He had been one of a crew of lads whom the British police had sardonically nicknamed “The Beatles”.

The Dubious Intentions of a Self-Sufficient Jihadist

Abdel Bary, arrested in Almeria, was part of a group of British combatants nicknamed “The Beatles”

[Photo caption: At left, Abdel Bary. At the right, a photo of the ISIS group he belonged to]

What gave away Abdel-Majed Abdel Bary, 29-year-old British rapper and one of the most wanted jihadists in Europe, was his ears. The agents of the General Commissariat of Information, of the National Police, observed him up close during the five days he was staying in Spain before being arrested in an apartment in Almeria, early Monday morning: “The shape of his ears was one of the aspects that allowed us to identify him,” the agents reported. He had been staying, together with two other men, in a tourist apartment near Puerta Purchena Square, in the center of the Almerian capital. Since he was forty kilos heavier and wearing a mask in conformance with the confinement imposed by the Corona virus crisis, the agents had to dig deep to ensure it was him. This Wednesday, he was sent to prison together with two other persons with whom he was found, by the judge of Central Court number 3 (National Court) Maria Tardon, accused of “being part of a terrorist organization” in a cause that remains a secret.

Three months ago the agents running the investigation became aware of the possible arrival of Abdel Bary. “We didn’t know where he might try to enter, but the information indicated that he might try at any time.” It is about one of the “somewhat more than 100” Islamist terrorists that the police follow in order to avoid their return to Europe. Since the decline of the Islamic State (ISIS) and the death of its leader and the creator of the caliphate, Abu Bakr al Baghdadi, in October 2019, “the returnees” are one of the principle threats for the Western societies.

Abdel Bary is the son of an Egyptian, Adel Abdel Bari, jailed in the US for participating in the massacres at the US embassies in Kenya and Tanzania in 1998, with more than 200 deaths, and he answered the call of the Islamic State in 2013. He left his budding career as a rapper and his expensive house in a neighborhood in East London, where he had moved with his mother and two brothers from Egypt when he was a child, to fight with ISIS in Syria. “For two years, he was very active as a member of the Beatles (police nickname for a group of five British combatants), but in 2015 we lost track of him in Turkey,” an agent stated.

He combined a shameless exhibitionism with photos, videos and proclamations in social networks, with a great tendency to submerse himself in the dark Internet. “The next that was known of him was that he returned to enter Syria in December 2019. He was located there after many thought that he had died in the bombardments,” related an investigator. “Afterwards, Almeria,” he concluded.

Sources from the so-called Operation Altepa confirmed that he arrived there using the illegal immigration routes from Algeria, where he presumably spent time preparing his trip. He made the crossing allegedly accompanied by the two Algerian citizens who were sharing the apartment with him. One answers to the family name of Ceddiki, is 22, and is the “getter”. The latter had a false European passport and was the one charged with renting the tourist apartment for a month. He is a specialist in credit card fraud, and with connections in North Africa was responsible for the logistics, say the investigators.

The other detained man is as yet unidentified. The agents have sent his fingerprints to be checked in international police data banks and are awaiting the results, though they suspect that “he could be another returnee since recently, he was in Turkey,” they note.

None of them offered even minimum resistance when arrested, nor showed the slightest surprise: “Total coldness,” the agents described. And the three demonstrated absolute secrecy concerning suspected jihadist activities, both before the police and before the judge. None of them said anything, according to police sources.

In the apartment the agents found “neither precursors, nor explosives, nor arms,” but they seized mobile phones and a computer that “perhaps will clarify something with respect to the intentions of Abdel-Majed Abdel Bary,” who is accused of belonging to a terrorist organization, but nevertheless has no other previous offense in Spain other than having spent five days hidden in an apartment in Almeria.

“He has wide experience in combat, in the making and handling of explosives, and a great ability to obtain funds, and he moves like a fish in water in the dark Internet,” note the agents about the principal suspect in the operation. “He is a self-sufficient terrorist; he doesn’t need anybody; he himself can create his own cell,” they explain.

The United Kingdom revoked his citizenship after he went to Syria, so he will not claim it. If extradition is not claimed by any of the third countries in which he could have pending charges, the only place he could be returned to is Egypt, where he was born, and with whom Spain maintains agreements. But there is the second part of the operation Alpeta: Retrace in reverse the steps the arrestees made up until their arrest. Their tracks are now being crossed with police databases, and the materials seized are being analyzed, the fruits of which remain to be seen.

Making holy war at the rhythm of rap

Abdel-Majed Abdel Bary transferred his capacity to send messages with rap in London to willingly making jihad in Syria. From there, in full combat, he wrote inflammatory passages, threats, posted his own photos holding decapitated heads, showing large weapons… All a warlike and exhibitionist rosary, which also enabled the forces and agencies of security to follow his steps. Though the National Court connected him to another matter with one of the young jihadists held in Spain, specifically with a girl from Huelva, sources close to this investigation insist they have no confirmation it is him. And they also warn that he was confused with the terrorist who cut the throat of the American journalist, James Foley. This act, in August 2014, was perpetrated by another of the members of the so-called group “The Beatles”.

6 thoughts on “I Wanna Hold Your Hand Grenade”