Our Bangkok correspondent H. Numan sends this report on the coronavirus in Thailand 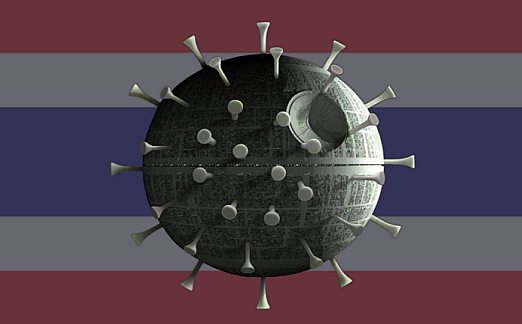 Folks, I say it for the last time: Happy New Year! In Thailand we celebrate New Year three times: the Western New Year on 31 Dec-1 Jan, Chinese New Year in February, and finally Thai New Year or Songkran from 12-15 April. We expats sometimes irreverently call it ‘the annual culling of stupid Thais’.

You probably wonder why. Songkran is celebrated with lots of water and almost as much booze. The water splashing and fights are well known all around the world. It started as a ceremony where the elderly got sprinkled with water out of respect and evolved into a no-holds-barred fight where anything goes. I’ve seen people attaching hoses to fire hydrants and hosing down passing motor cycles, cars and buses. It’s also great fun to empty a bucket filled with water and ice over a passing motorcycle. This goes on from early 12 until late 15 April, in some cities even later. Non-stop. Same goes for boozing up. Getting splashed or hosed down goes for anyone on the streets, no matter what. You may be wearing a tuxedo or an expensive laptop, it doesn’t matter. Being on the streets makes you fair game.

Thailand has the second most dangerous traffic in the world. Only Libya is worse. Songkran is one of the two ‘seven deadly days’ periods, the other period being Western New Year. During those deadly days the death toll rises to +400 for each period, with matching numbers of seriously injured people. The government does what it can to alleviate these horrendous figures, with limited success.

This year, however, will be very different. All public festivities have been canceled. For the first time in 25 years I can probably walk the streets unmolested… I don’t like Songkran, and always stay indoors (because of the indiscriminate hosing of water). This year we are in total lockdown, so everybody has to stay indoors. It might even be a limited blessing in disguise: The death toll due to the coronavirus is so far 32, relatively low compared to most nations. Make that 60 in the near future. Very likely the number of traffic deaths will be much lower, maybe as low as 200. Which is a big win. But at what cost…

Thailand is in total lockdown. Air travel in and out of the country is completely suspended. Only repatriation flights leave the country. Travelers have to have medical certificates in order to board. Repatriation flights with Thais are coming in. Those on board have to disembark and go into quarantine for 14 days. Most comply, but not everybody. We had a bit or a row when a group of travelers refused to go into quarantine. The airport police had to detain them, and a general was called in to calm down the situation. A few managed to escape during the scuffle and are now on the most-wanted list of the Royal Thai police.

When I say lockdown, I mean it. Several provinces have declared internal lockdowns. Only locals are allowed in, nobody else. Pattaya (more exactly: Chonburi province) is one of them. The otherwise bustling city looks almost deserted. There is a nationwide curfew from 10pm until 4am, rigidly enforced by the police. Penalties are Bt. 40,000 and/or two years in hell jail. That fine can be translated into $4,500 or €4,000 to give you an idea. Bt. 40,000 is a pretty good salary, unattainable for most Thais. You have to wear a face mask in public. Bt. 100,000 if you don’t. Oh, something else that won’t raise the spirits, literally. An alcohol ban from 8-16 April. Large shops and government offices enforce strict 1.5 meter space at checkouts. Visitors are all checked for temperature. Sometimes that can lead to funny readings, if the temperature is taken right under an air conditioning vent. Seriously: if your temperature really is 32°C, you have bigger problems than a possible virus.

A few people even committed suicide due to the virus. Three ladies jumped of a bridge or bridges over the Chao Phraya river in Bangkok. Two of them drowned, one was able to be rescued.

The national state of emergency was to last until 12 April, but has now been extended to 30 April. All schools will remain closed until the end of May. That sounds worse than it is: the annual school break is in this period of the year. So kids just have a longer summer holiday.

This crisis is hitting Thailand pretty bad. More than 20 million Thais are now unemployed. A third of the Thai economy relies on tourism. There isn’t any right now. Not inbound, and not outbound. Most hotels are empty, or closed on government orders in some provinces. A few offer accommodation for medical staff or as emergency hospitals.

The government offers support to the people up to Bt. 5,000 for three months. That’s next to nothing. Just enough to pay the rent for one month in Bangkok for a cheap/average apartment. How you’re going to get this generous gift, no idea. Bureaucracy is a Thai word. Civil servants outdid themselves in making applications next to impossible. Nobody I know of was able to apply successfully.

So far Thailand has been spared the worst of the outbreak. We have 2,400 patients, and 34 deaths at the moment. Other countries have been hit much, much worse. Thailand is very close to China (as opposed to Italy, for example) with many millions of Chinese tourists visiting the country annually.

China claims to have defeated the pandemic. I’m not so optimistic. The Thai government has to make a very difficult decision: believe it, and revive the Thai economy. Or take it with a grain of salt, and save the people. Who would then starve to death due to lack of income…