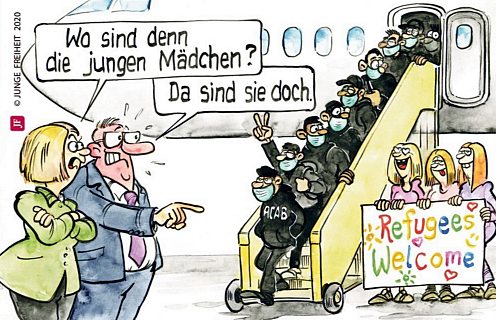 ‘So where are the young girls?’ ‘There they are.’

The following video is a brief split-screen of recent events in Germany. On the left side you’ll see Michael Kuffer a member of the Bundestag for the CSU, the Bavarian version of Angela Merkel’s Christian Democrat party, the CDU. He is speaking on the floor of the Bundestag in the middle of last month, promising that the thousand “children” Germany agreed to take from the Greek migrant camps will almost all be little girls.

On the right of the screen are clips showing the arrival of the youngsters a month later — nary a chick among them.

Concerning the Junge Freiheit cartoon at the top of this post: The “ACAB” on the shirt of the child at the front of the queue stands for “All cops are bastards”. It’s a reference to a notorious photo of the arrival of the “refugees”, in which one of the little boys is wearing a shirt on which the acronym is prominently displayed.

For further context, see this post by Fred Alan Medforth.

Many thanks to MissPiggy for the translation (and for helping me with the context), and to Vlad Tepes and RAIR Foundation for the subtitling:

14 thoughts on “A Minor Problem”