I find myself at a loss for words concerning this news story from Modern Multicultural Sweden. I can’t even think of something flip to say — and you all know how unusual that is for me.

Many thanks to LN for translating this article from Nyheter Idag:

Boys are circumcised with a soldering gun — “Doctor” is prosecuted 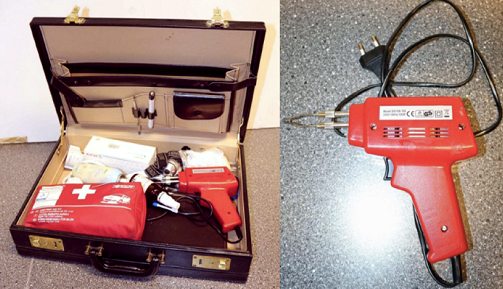 GÄVLE / SÖDERHAMN — A man in his 30s is now being prosecuted for having circumcised nine boys in Gävle and Söderhamn — without anesthetic and with a soldering gun as a tool. So reports Helahälsingland.

The man charged is said to have received nine months of medical training in Syria, and has had no such training in Sweden. The reason he used a soldering gun during the operations, he explains, is that it “has so much heat that all possible bacteria die”.

The man himself thinks he is good at performing circumcisions, but does not have the permits required to do so in Sweden.

According to the prosecution, he circumcised nine boys, seven of whom have had complications that in some cases may need to be corrected with surgical procedures.

The parents paid for the operation with Swish and were under the delusion that it was all legal and safe. They unanimously stated that the person who organized the circumcisions was in charge of the now-closed Muslim preschool Bilaal in Söderhamn, and that the man was perceived as reliable.

According to the parents, this man must have been active in the operations and held the children. He himself says that he only participated as an interpreter. He is not suspected of any crime.

“He did not know that this person did not have a permit, therefore it is not possible to prove that the suspect had the intent required for the procedure to be criminal,” the prosecutor Micael Dahlberg told Helahälsingland.

The “doctor” is charged with assault, causing grievous bodily harm, and violation of the law on circumcision of boys.

7 thoughts on “Solders of Allah”