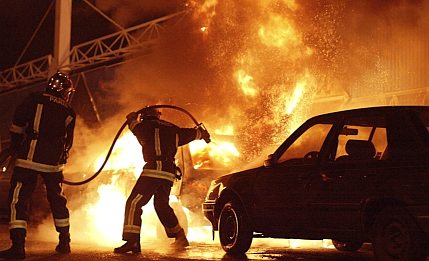 Burning cars has been a New Year’s custom in France for decades. I first became aware of the practice in 2005, not long after this blog was started, when the mischievous “youths” of the Parisian banlieues were particularly zealous in their incineration of automobiles.

Aficionados of the sport keep track of the statistics. As car-burnings go, the New Year’s festival of 2019/2020 was just so-so — more than some years, less than others.

MissPiggy has translated a series of videos and articles to produce a report on this year’s carbecues in France over the New Year’s holiday. Many thanks to Vlad Tepes for the subtitling.

The first video is a French news report about the trolling of President Emmanuel “Toy Boy” Macron by President Donald Trump over the car burnings in France:

The second video illustrates the unabashed, abject surrender of public intellectuals to the endemic lawlessness of the immigrant banlieues.

MissPiggy translates from the notes on the video: “For the French columnist and lawyer Marie-Anne Soubré it’s better to have torched cars than riots between young people and police officers. The transition to the New Year was marked by many car fires. In Strasbourg, more than 200 vehicles were set on fire. Marie-Anne Soubré concedes that she prefers to see this kind of incidents rather than riots.”

Below is an editorial about the car-burnings from the news site Boulevard Voltaire:

There were burnt cars in Strasbourg, Bordeaux, Limoges, Nantes and even at my house: Le Monde has seen “nothing”?

Globalization is a wonderful phenomenon, especially for our evening life, as we used to say before. Thus Le Monde keeps you informed on a daily basis about the fires burning in Australia and the good performance of the French car market.

Fire? Automobile? Well no, the association did not wake up the editor. Nor did the smell of burnt cars coming up from Strasbourg, the suburbs of Paris and elsewhere, many regional metropolises and sometimes even small outlying towns; no, Le Monde no longer has a sense of smell, sight or a special correspondent. At the time of writing, on 2 January, almost forty-eight hours after the fact, no summary article has been published. On the other hand, Philippe Martinez, Carlos Ghosn, and Emmanuel Macron at the Angoulême Comic Book Fair are being followed closely. Cédric Pietralunga tweets the scoop on the presidential visit scheduled for the end of January. In Le Monde, we are definitely looking very far over these fumes of the 31st…

But the globalization of the world and the world according to Macron cannot prevent the reality of these burning cars, on the evening of the 31st, from coming up on social networks, via a tweet from Trump or via the videos of the riff-raff bragging about them. And the regional press can’t fail to mention them, or risk losing even more credibility.

So there was Strasbourg, as our Alsatian friend José Meidinger told you. But the West and the Southwest were not spared.

In Nantes, in the Malakoff district, at least fifteen cars were set on fire, but other areas of the city were affected, according to Ouest-France, as a police source told the daily: “We had them almost everywhere.”

In Limoges, between 26 and 36 cars were set on fire, according to Le Populaire du Centre. When questioned, the prefect’s chief of staff said that “the emergency services and the police were hard-put, in particular by the throwing of projectiles by small groups”.

In Bordeaux, too, Sud-Ouest could not hide the reality: “Tensions in Bordeaux on New Year’s Eve: cars and garbage cans burned.” The Aubiers district was particularly affected, but in fact several communes in the agglomeration were affected. The regional daily knows no more than the prefecture’s statement: “The police had to deal with tensions that began early Tuesday evening with groups of young people and resulted in car and rubbish-bin fires in several towns in the metropolis. There have been arrests following the throwing of projectiles at the police.”

Le Monde says nothing. For the time being. The regional press says a little. All that’s left are the desperate tweets from the unfortunate owners of the burned cars.

There are lawless areas in France; it’s well-known. There are also white zones, where communications do not go through, where the press does not seem to investigate, and stick to the communiqués of the prefecture. It looks like a war communication, by the way. Our journalists should think about this. There are also white periods, from 12/31, “very early”, until the 1st or the 2nd very late, we will now be asked to concentrate… I don’t know… on the wishes of Emmanuel Macron? Why not stretch them, by the way: 18 minutes, then 36, then 48 hours. Before joining the Comics Festival in Angoulême to launch his New Year with a fanfare.

Angoulême? The Charente Libre tells us that the city also had its “urban violence” and “burnt cars” on the evening of the 31st. Before looking into the hypothetical visit of our President Potemkin to the festival of bubbles, Le Monde could perhaps investigate the fumes of Soyaux, no?

But, in fact, as early as 2017 — January 4, the wake-up date — Le Monde warned us by sending out the phenomenon with a Shakespearean title: “Cars burned on New Year’s Eve: much ado about nothing”, with a sociologist to back it up: “This figure [of burned cars] is surely a symptom of something, but we don’t know what. In any case, it doesn’t explain or tell us anything.”

A Roster of the Carbecues: