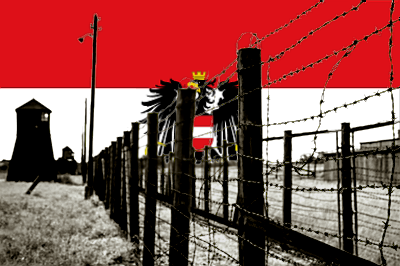 MissPiggy has translated an article from the Kronen Zeitung about propaganda workshops in a Vienna school that force children to role-play the experience of migrants when they apply for asylum.

People need to know what kind of deviant vileness they are imposing our children WITHOUT permission. THEY ARE THE ENEMY. Those are tactics the enemy uses. Sneaky and perverted brainwashing.

The suspicion sounds really unbelievable: Somewhere between breakfast and homework, children at a Viennese school are said to have been forced into a “refugee game” in order to experience first-hand what it feels like to be displaced. Asylum associations actually offer such workshops for educational institutions.

And this is how the story is supposed to have happened: Students at an educational institution were forced to play the game. As soon as they arrived in the building, so the accusation goes, they were treated like refugees, even being marked as such with coloured bands of fabric.

But the story goes even further: The 12- to 14-year-olds were made to wait a long time in a room. Apparently to simulate through first-hand experience the complexity and the psychological terror caused by an asylum application procedure.

Not discussed with parents

Sounds absurd, but such workshops really do exist. They are offered by the Asylum Coordination Austria, among others. “Has this been arranged with the parents?”, the Krone asks. “No, what for?” responds the employee Herbert Langthaler. “We’ve already had 10,000 students in such workshops.”

This “game” is advertised something like this: “The aim is to highlight the experiences of displaced people and the emotions associated with them, such as fear, loneliness and despair.” The Directorate of Education considers this to be problematic and is examining it.

6 thoughts on “The Cultural Enrichment Game”