At the end of this month Brexit will become a reality. Or will it somehow yet again be postponed? Our English correspondent Seneca III has some thoughts on the matter. 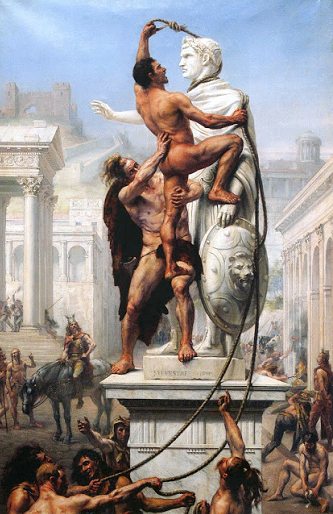 Brexit: The Cities, the Shires and the Open Sea

In eight days and eight nights as of this writing I will greet the rising sun on the first day of February 2020 with much the same status as I unknowingly did seventy-eight years ago as I entered into this life as a free-born child of England, but I incline to say “much the same status as”, because my freedom, as tentative now as it was then, will not be complete. Yes, our D-Day does hover on a near horizon — in this case just over a week away — but its success or failure is as unpredictable now as it was in June 1944.

Thanks to over four decades of scheming, surrender-treaty-signing politicians we will at best still face almost a year subject to binding EU controls, restrictions and judgements and to the continued payment of huge membership fees to an organisation of which we will no longer be a member and from which we will receive no benefit (if we ever did), plus, at the end of it all, paying thirty-nine billion pounds of ransom money to finally escape its clutches.*

The terms and conditions of this robbery at legal gunpoint are enabled and enforced by the chains those treaties acceded us to. That the ends of those chains are firmly in the hands of an implacable enemy construct across the Channel to which our groveling governing classes pay obeisance is humiliating and dangerously detrimental to our financial and sovereign future.

And, just to ice the cake of our subservience, the rape and plundering of our fishing grounds by EU Seine Net, Electrification and Beam-Dragging Mega-Trawlers will continue at an accelerating pace to the point where, with their food chains destroyed from the bottom up, those waters will have become near sterile wildernesses by the time we get them back eleven months later.

Yet, on that day of days when we at least partially pull the plug, I will still stand proud to be British, to be one miniscule part of a Union and a people who, despite several decades of subtle deceits and nigh on four years of high treason in the corrupted Mother of Parliaments have, for the umpteenth time since the Norman invasion and the third time in the last hundred years, found the will and the courage to resist and repel yet another attempt at foreign hegemony over the once green and pleasant land that is this small wind-swept archipelago in the North Atlantic. And possibly even saved Europe from itself in the process.

Still, I am foremost minded of the fact that at that at 2300 hours on the 31st we will still have that long, uncertain year’s slog ahead of us, a hopefully beneficial progress we might at least be able to sustain for a short span, but only for a short span because the singular triumph of Brexit which succeeded against all odds over this latest attempt to subordinate us to the beat of different drummers is not the linear and forward looking process it would appear to be. It is in actuality a small length of arc on the circumference of the closed circular course of our political affairs where a precession that, if not recognised or accepted with insouciance and thus immediately rejected, always tends to produce another attempt at dominance by inimical entities either from either within or without. Or both.

Yet the rise and fall of the circumstances that time imposes upon the lives of We the Common Man, on our hopes and dreams, on our freedom from the yoke of others, on our desire to live out our days as we wish, invariably moves beyond our control as a few small successes soon distract our attention from the reality. That is a thing of negligent memory or a propensity to fail to carefully observe and understand the immutable course of human affairs.

The acquisitive political classes and the eternal recidivists populating every aspect of our supposed ‘democratic’ nation state will, sooner rather than later, return as the same old tyrants camouflaged in slightly different ideological cloth whilst attempting to grasp the levers of power once again. If we win this one, then the Manichean manipulators lurking deep in our establishment will attempt to impose upon us another dichotomous world view as a means of re-achieving dominance. We must watch them very carefully indeed.

“It’s no use going back to yesterday, because I was a different person then.” …

— The Queen of Hearts, Alice in Wonderland by Lewis Carroll, published 1865.

And we must also beware the trap they set for us, one baited with affluence and indulgence, one which leads us on a quiet descent into localised bubbles of comfort as the long-established political ghosts of the previous regimes quietly rise unnoticed from their shallow graves. Control of the masses through the temporary salve of bread and circuses was not solely a Roman predilection.

Finally, it has long been recognised that the human psyche is dominated by envy and cupidity. This is certainly substantiated by the fact that large, high-population-density urban conurbations full of acquisitive corporatists, kleptocrats, bankers, chancers, welfare-dependents, sociopaths and those inherently criminal invasive ethnicities who have infiltrated us is a formula for a countrywide implosion or explosion.

They are the greatest threat to our way of life; they are the defining incarnations of the dogmas that are currently being touted as ‘Globalism’, ‘Intersectionality’, ‘The Peace of Allah’, ‘Climate Emergency’, ‘Human Rights’ including all of their weird legal and secular sub-divisions which, individually or in concert, destabilise, compress and direct disparate communities and belief systems, both native and invasive, into festering, tumultuous hive cultures ruled with a draconian fist by and for the benefit of the few, be those few either Plutocrats, Transfreaks, Imams, Demented Ecoloons, Arrogant Lawyers or any groupings thereof, and that collective of psycho-babbling, ill-informed, scary single-issue fanatics have no comprehension of what will hit them either.

Hence, situational awareness must be our watchword. These hive-cities, so well epitomised by Londonistan, are an illuminating example of the collective retrogression that is the result of another homegrown predatory class arising and an overwhelming ethnic mass of primitive cultures arriving and then together imposing their visions upon the rest of us.

“The social atmosphere is that of a besieged city. And at the same time the consciousness of being at war, and therefore in danger, makes the handing-over of all power to a small caste seem the natural, unavoidable condition of survival.”

Meanwhile, in the Shires and on the coasts, we the generally quiet, hard-working majority contributors, we the builders in stone, wood and steel, the craftsmen, the sons and daughters of the horny-handed ploughers and planters of the soil and the casters of nets into great waters who together are the agrarian, constructive and pelagic backbone of these islands, we continue to watch and wait.

We and our ancestors, forever defined by our habitats and histories, have seen this all before, and the over-hyped phrases ‘peasants with pitchforks’ and ‘villagers with torches’ may have become clichés but they carry within them a simple, abiding truism… the Shires and the Coasts can sustain and feed themselves — even if only with great difficulty at first as they adjust to the inevitable diminution or loss of modern power supplies brought about by the inevitable battle against invasive Islam and its sub-Saharan African fellow travelers — but do that thing we can, and we will. The cities cannot and will not.

So, as the future bears down on us, we must never forget that every generation must fight for its freedoms, its sustenance and its livelihoods, each after the other and each in different ways under different circumstances, but fight for them they must… or lose them.

— Seneca III, in Middle England, awaiting a dawn seven days hence, albeit with some trepidation, on this Friday the 24th day of January in this the year of our Lord 2020.

7 thoughts on “Brexit: The Cities, the Shires and the Open Sea”