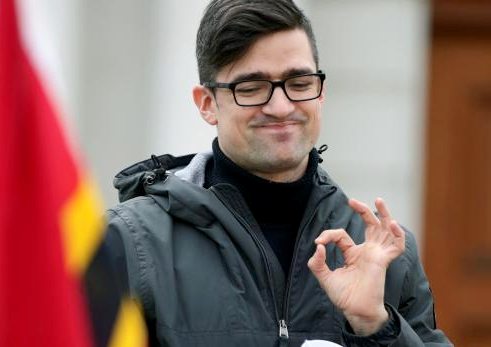 Martin Sellner is the leader of Identitäre Bewegung Österreichs, the Austrian chapter of the Identitaire movement. As early as 2018 his house was raided and searched by the police, and then the same thing happened earlier this year after the Christchurch massacre in New Zealand.

Now an Austrian court has ruled that the search of Mr. Sellner’s house was illegal. Many thanks to MissPiggy for translating this article from Der Kurier:

A court in Graz, Austria upheld several complaints submitted by the head of the Identitarian Movement. The initial grounds for suspicion do not appear to have been sufficient.

Monetary donations from the Christchurch assassin were the starting point for house searches in Martin Sellner’s apartment in Vienna in March of 2019. The head of the Identitarian Movement Austria (IBÖ) had received a donation from the assassin several months previously. The case was being investigated on suspicion of his being involved in a terrorist organisation (penal code §278b (2)). Sellner then publicised the house searches on his blog. Three months later, investigators again visited Sellner. Investigations were also conducted against his then partner and current wife, activist Brittany Pettibone.

Sellner then lodged a formal complaint against the house searches, and won this past Friday in court. According to information provided by the public prosecutor’s office in Graz, the court ruled in Sellner’s favor for multiple complaints at once. For example, access to his bank accounts should not have been granted. The court ruled there had been insufficient grounds for suspicion against the IBÖ leader for authorities to carry out these actions.

Sellner intended to announce the “good” news on Saturday afternoon in the Vino restaurant near Vienna’s Rathausplatz, the same restaurant in which Heinz-Christian Strache held his resignation press conference. However, the restaurant issued a house ban against the Identitarian leader Sellner. “Once again we are standing outside because we are not allowed in. My office is on the street,” Sellner began his speech to the few journalists present and many of his followers.

Primarily criticised was the “damage to reputation” caused by the tabloid media. Sellner told the Kurier that he would not be taking any legal action, explaining that the negative headlines had not led to a decline in the number of members and supporters of the right-winged movement. “Every T-shirt order was leaked, but people reacted with defiance and anger. I was very happy about that,” says Sellner. The latest legal ruling could actually pave the way for the movement to become a new party, but that isn’t what the IBÖ is striving for, according to Sellner. “I think that the Ibiza scandal [which devastated the FPÖ and ended Heinz-Christian Strache’s political career] may have been a wake-up call for Austria’s patriots,” he said. “They now realise that parliamentary patriotism will by no means save our homeland,” Sellner said, using the opportunity to spread his ideas.

These house searches were not the first time the IBÖ had a run-in with the law. A Graz criminal court unsuccessfully litigated against 17 followers of the movement. The accused were cleared of all charges of hate crimes and forming a criminal organisation. At the beginning of the trial, the public prosecutor treated the accused very harshly. “They present themselves as a group of the law-abiding and are perpetually breaking the law.” There were also accusations of property damage related to various IBÖ initiatives called “Integration ist Lüge” [Integration is a lie]. This also included storming a university lecture in Klagenfurt, during which the University President was allegedly punched in the stomach. However, the Identitarians won the court case after an appeal at the beginning of the 2019.

3 thoughts on “The Persecution of Martin Sellner”