Our Swedish correspondent LN has translated more material about the long-awaited climate messiah Greta Thunberg, and also includes his own introduction and afterword.

ZERO emission activist Greta Thunberg with her entourage is back in Europe. However, ZERO is not always ZERO. How will we achieve ZERO greenhouse gas emissions in the future? 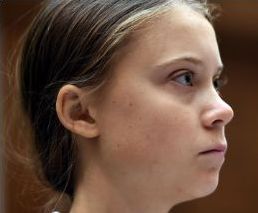 The Swedish Environmental Protection Agency has calculated the matter and concluded that we in Sweden… will not be able to reach the long-term environmental goal of ZERO net greenhouse gas emissions until 2050.

ZERO net emissions, however, do not necessarily mean that no emissions are allowed. Up to one third of the emissions may still be present in 40 years.

While preparations continue toward reaching the ZERO emission target, more and more perceptive people are seeing through the Greta Thunberg & Coworker-led activism.

Greta without a mask — the climate was a smokescreen

Many people saw early on what was behind the mask of this hectic “climate movement” attributed to Greta Thunberg and her school strike. But even more people understood nothing at all, and threw themselves into the new movement where they could signal their goodness. Unfortunately, it all turns out to be nothing but the same old left-wing extremism.

It may seem that you are good and stupid when you do not understand what it all was about. When the left-liberal media, left-wing politicians, a “philanthropist” like George Soros and the violent left (which forms the core of the Extinction Rebellion) gather around a common cause, then it’s about another united front — a classic modus operandi by the Reds. Choose one thing that many can agree on (get scared by), whip up the mood using your own old media and ensure that financing is handled with the help of capitalists and/or with tax assets. And over and over again it is the same thing that happens.

Climate change fit like a hand in a glove. Who wants to be the one who is “against” the climate? The question itself is also so big and cumbersome that one can refer to “science” and “ researchers” and entirely renounce one’s own responsibility. “The researchers say…” And so it was with that thing. It doesn’t matter if the “researcher” turns out to do “research” about gender or critical whiteness.

There must also be a sense of acute desperation when the matter is presented. Previously it was nuclear arms, or the arms race, or to rescue all children fleeing across the Mediterranean. This time the destruction of the Earth within 10, 15, 20, 50 years.

For those who are able to be guided by “opinion” and want to fit in (most people do), it is self-evident to be moved in one way or another. Maybe there is a certain amount of doubt, but it is still “for a good thing”. It’s also a great way to kick-start lazy youngsters. Although technology has made many young persons passive in real life, there is still in the young the will to riot. This is natural because part of the process of becoming an adult involves “revolting” and breaking away from mom and dad and learning to stand on one’s own two legs. This is something the Reds always have been good at cynically exploiting.

After the effects of the “the refugee crisis” it became clear to almost everyone that the end of the road to establish a united front on this issue had been reached. So they had to find something new. Picking up Greta Thunberg and parading her around the (Western) world must have been a goody. Here one can recall Roosevelt’s words that nothing in politics happens by chance. We will probably never know exactly how predefined this moment with Greta was from the very beginning.

So — forward with Greta and let her be the young voice that wants to save the world. The movement starts, and with the huge financial and mass media support that followed, it was all a simple matter. And after a while, when the snowball is rolling, then you can become more open-minded and say what you wanted to say from the beginning. Then the mask finally falls off.

It happened with a statement from Greta Thunberg, Luisa Neubauer and Angela Valenzuela. The girls explain — in a well-worded statement — why the school strikes must go on. It was a lot of the old ordinary stuff — but an extension, written in plain text, is added to the program. They write:

That action must be powerful and wide-ranging. After all, the climate crisis is not just about the environment. It is a crisis of human rights, of justice, and of political will. Colonial, racist, and patriarchal systems of oppression have created and fueled it. We need to dismantle them all. Our political leaders can no longer shirk their responsibilities.

Some say that the Madrid conference is not very important; the big decisions will be made at COP26 in Glasgow next year. We disagree. As the science makes clear, we don’t have a single day to lose.

We have learned that, if we do not step up, nobody will. So we will keep up a steady drumbeat of strikes, protests, and other actions. We will become louder and louder. We will do whatever it takes to persuade our leaders to unite behind science so clear that even children understand it.

Collective action works; we have proved that. But to change everything, we need everyone. Each and every one of us must participate in the climate resistance movement. We cannot just say we care; we must show it.

Join us. Participate in our upcoming climate strikes in Madrid or in your hometown. Show your community, the fossil-fuel industry, and your political leaders that you will not tolerate inaction on climate change anymore. With numbers on our side, we have a chance.

And to the leaders who are headed to Madrid, our message is simple: the eyes of all future generations are upon you. Act accordingly.

So, that was it. It’s the same old revolutionary Left with its cry for breaking down and building anew. The threats are constantly present:

We will do whatever it takes to get the political leaders to stand behind science … etc.

It is a revolution in the West they are looking for — violent if required. Then society must be transformed according to the will of the Reds. A save-the-climate dictatorship is required; the state must take over all ownership; the freedom of the individual is required to become limited (so one can’t hurt others); it is also required that children will be taken away from parents who do not accept the wisdom of the state.

Don’t think otherwise, this is just what they are looking for.

With this in mind, we cannot look at this “Save the Globe” movement favorably. We can be neither understanding nor considerate. We must be clear that this is a threat to freedom and — yes — to humanity. Nothing good comes from the social experiments of the Reds, only nondescript horrors. Over and over again our earth has been plagued by these godless materialists. The only thing that can stop them is a serious and vigorous nationalism.

As at any episode during the course of history, the tree of liberty will require to be watered by the sacrifices of patriots. We are the self-defense movement of free peoples; we are forced to mobilize the troops when the Reds go too far. They always go too far. When you advocate an idea without any anchor to reality, built around faulty political programs and with compulsory collectivism as the foundation, you are always pre-determined to go too far. We know it, and we are ready to once again defend our families, our people, our nation and the tradition that has guided our tribes throughout history.

What is a united front (Swedish: enhetsfront)?

An alliance of groups against their common enemies, figuratively evoking the unification of previously separate geographic fronts and/or unification of previously separate armies into a front— the name often refers to a political and/or military struggle carried out by revolutionaries, especially in revolutionary socialism, communism or anarchism.

The basic theory of the united front tactic among socialists was first developed by the Comintern, an international communist organization created by communists in the wake of the 1917 Bolshevik Revolution. According to the thesis of the 1922 4th World Congress of the Comintern: the united front tactic is simply an initiative whereby the Communists propose to join with all workers belonging to other parties and groups and all unaligned workers in a common struggle to defend the immediate, basic interests of the working class against the bourgeoisie.

The united front allowed workers committed to the revolutionary overthrow of capitalism to struggle alongside non-revolutionary workers. Through these common struggles, revolutionaries sought to win other workers over to revolutionary socialism.

22 thoughts on “Greta Thunberg: The Avatar of the Totalitarian New World Order”