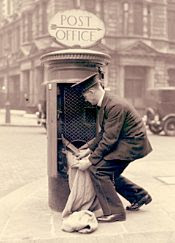 I’ve held off posting this wrap-up about the Autumn fundraiser because I was kind of waiting to see if more of my thank-you notes would bounce. However, I’m still writing them, and I’ve got quite a ways to go. So this is an interim update, and if anything else bounces, I’ll post a further update.

Just three thank-you notes have bounced so far, after two attempts apiece. The intended recipient of the first lives in Southern California.

The second one listed no address with PayPal, so I can’t tell you his location. All I know is that his name makes it likely that he is an Anglophone.

The third is in Georgia (the one in Dixie, not the Caucasus).

If you’re missing a thank-you note, that may the reason. On the other hand, you may be one of the people I haven’t written yet!

The most interesting comment I got in reply was this:

In your fundraising posts, you may wish to consider bragging a bit more about niche, reach, influence, etc., e.g.: “The ONLY/BEST daily roundup of news from non-US sources, with UNIQUE videos and translations.” I know of no other source for this info.

He’s probably right. But I told him that I’m a severe introvert, and not inclined to brag. It just goes against the grain. Yes, more self-promotion would probably be a good idea, but this dog is too old to learn new tricks.

Here’s the final tally of places (leaving out donors with no listed address):

4 thoughts on “All the Leaves Are Brown…”