Last week a gunman named Stephan Balliet used what was apparently a home-made firearm to shoot two people to death in the vicinity of a synagogue in the German city of Halle.

All major media outlets immediately and predictably identified the perpetrator as a “far-right” or “neo-Nazi” ideologue. Such descriptions were concocted using absolutely zero evidence — in fact, there was evidence that contradicted the Narrative on the shooter, but has since been suppressed: the gunman’s live stream of his rampage. It has understandably been removed from the social media service on which it was originally streamed. However, a version of it with the most sensitive parts either removed or blurred out could have been released to the public. The problem for the Powers That Be is that the shooter’s record of his acts does NOT support the “right-wing” Narrative about him. The only ideology on display in the video is his Jew-hatred — which these days is more often the provenance of the Left, and not the Right.

To set the record straight Vlad Tepes has made a bit-torrented version of the killer’s live stream available. Thanks to the intrepid work of Nash Montana, the footage includes translated subtitles for the portions that were intelligible.

The two embedded videos (translated by MissPiggy) show mainstream media reports that pound in the Narrative. After those, Vlad has provided the link to the bit-torrented video. Watch it yourself and see what you think.

Vlad and I refer to the killer as “Pee Wee German”. If you watch his video, you’ll see why. Vlad is certain that the guy applied lipstick before beginning his rampage.

The essay below was posted at Vlad’s place in a slightly different form. Below that I’ve appended transcripts of all three videos. 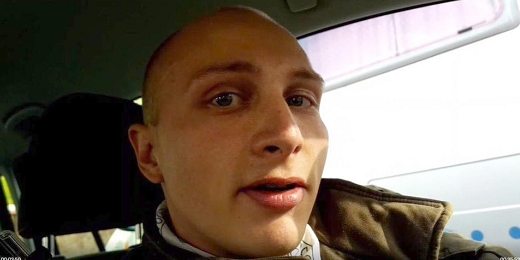 How the left uses a crisis to destroy all our rights and freedoms. Now using Halle Germany attack

After the New Zealand attack on a mosque, those of you who followed the issue may remember how quickly all evidence of the video and the manifesto was removed from the internet except for the most protected and adept at finding these sorts of things.

The next thing that happened was the socialist (read communist) PM of New Zealand used that attack, while ignoring the thousands of islamic attacks of manifest destiny, even the one that came soon after, killing hundreds of Christians in Sri Lanka, to advance her program of increased power to the state, and the right to send police out to every New Zealander that ever objected to mass immigration policies or Islam in general. (This could be an example of Marcuse’s ‘Repressive tolerance’.)

The tragedy of that attack was rapidly turned into an opportunity by the state to dramatically increase its power beyond what democracy allows for, at the expense of the individual, or any dissenting opinion. The state did so by inventing the narrative and opinions of the attacker in a way that was convenient to the state’s agenda, and by doing its best to bury any actual evidence of the real reasons the attacker did what he did.

For example they claimed he was a Trump supporter, even though his manifesto was clearly contemptuous of President Trump.

They made him a “Far right wing extremist” even though he called himself, a “National Bolshevik” in his manifesto. Which is a real thing. A merger of Nazi socialism with Soviet Socialism as far as I understand it. He also had all his weapons and materials covered in names of famous Balkan war heroes who had died fighting against Islamic manifest destiny in Central Europe and played a famous song to the cause of liberation of the Balkans from Islamic oppression.

All of that was well chronicled on this blog as it happened. The videos of the police going to people’s doors in New Zealand was especially interesting from this point of view.

So when a lone, anti-Semitic nut in Germany went to attack a synagogue in Halle, we expected something similar from the Merkel government. In this case, predictably that the far right is “Very very very very dangerous, at least as dangerous as Islamic terror.” Try to remember that when you watch the actual attack by this guy, linked at the bottom. A Jihadi could have stabbed 50 people by the time his psycho gave up his general failure.

The next thing we expected was that the Merkel government and her puppet groups, in this case a “Jewish” group that is a beard for communists to attack the AfD, and has been used before by leftist groups in Germany, would blame this dangerous “very very very very far right” extremist on the AfD as somehow responsible.

At this point we invite you to see the actual attack video the killer made when he did his little mission. In order to see it, we recommend that you are running a VPN, and have a torrent client installed like u Torrent or BitTorrent. If you have a torrent client and are protected by a VPN, then click this link and it should start the download of the file to your local machine. You may have to find the torrent file on your machine and click that to start the download of the video. Once you have it, please keep your torrent client open a day or so to help other people see what really happened, and what the German government is saying is at least equal to Islamic terror in Europe.

(Below is the description of the video. It should also be noted that he does shoot two people in this video. The faces of his victims were blurred, and what appears to be his home made black powder produces so much smoke that you do not see much of the aftermath of his shooting. So on the one hand it is graphic, but on the other hand not compared to the average TV show.)

This is the archive of the live stream by the Halle Germany attacker of a Synagogue and Kebab shop.

We are providing this video not in support of his actions. But because modern leftist governments hide evidence of political crimes in order to reinvent the motives, remove the rights of citizens based on narratives, and increase the power of the state.

One cannot have a democracy by any definition without free access to information.

We do not know what inspired this guy to attack. Our concern is that the attack will be turned into a weapon against all freedom loving people, as an excuse to censor the internet and restrict even more of our basic and natural rights.

The good news is, his incompetence prevented much real damage from being done, but he did murder two innocent people.

What is true is that at no point did he appear to endorse any political leader or ideology, other than classical anti-Semitism. And any attempt to make it look like he did should be met with this video.

One may remember how the video of the mosque attacker of New Zealand was erased from the internet and a replaced false narrative was invented in order to advance socialist control of as many areas of the world geographically, as well as in terms of the intellectual and legal space as possible.

We must all work to prevent tyrannical governments from allowing that to happen.

These two quotes serve as explanation:

“The lie can be maintained only for such time as the State can shield the people from the political, economic and/or military consequences of the lie. It thus becomes vitally important for the State to use all of its powers to repress dissent, for the truth is the mortal enemy of the lie, and thus by extension, the truth becomes the greatest enemy of the State.” — Joseph Goebbels, Nazi propaganda minister

And equally importantly from the side of light:

“…I have sworn upon the altar of God Eternal Hostility Against Every Form of Tyranny Over The Mind Of Man.”— Thomas Jefferson 1800 AD

The Jefferson quote is our motive for making this post.

Deep and profound condolences for the two victims of this attack, and all who knew them.

2 thoughts on “What Was the Ideology of the Synagogue Shooter in Halle?”