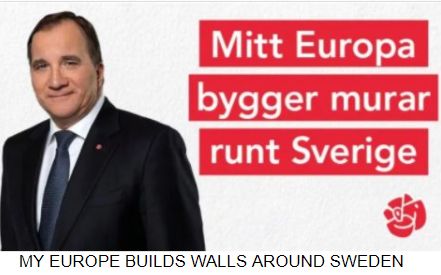 Our Swedish correspondent LN has translated an op-ed from Det Goda Samhället, and includes this introduction:

It is no wonder that Europe —Denmark first — is building walls around Sweden, this crime-ridden politically correct funhouse.

Here follows a light-hearted article about today’s Sweden, written by the well-known cultural personality Patrik Engellau. The comments in square brackets have been added by the translator.

Our Religion Prohibits Us From Saving Our Country

The other day, my Portuguese teacher said it was a thing she thought was strange.

In the past, she said, it seemed as if you Swedes believed that your problems with school and immigration and so on would disappear by themselves or in some magical way turn into successes.

“Now you don’t think so anymore. Now you just stand there and look at your problems without taking any countermeasures. For me, it is impossible to understand,” she said.

“By the way,” she went on, “I do believe in all your theories of the political power and the welfare-industrial-complex with all its state-funded activists, but this must be about something else. You seem to have left the world of rational explanations.

“You see the train approaching but refuse to get off the rails. I’m sorry, but to me it almost seems like a kind of self-harm behavior.”

Reluctantly, I had to agree with her.

It is no longer possible to explain Sweden on the basis of natural, selfish interests of various power holders and their activist lapdogs [Swedish: lydhund — compulsively obedient dog].

We are facing here another mental syndrome, in which self-interest has been subordinated to some other higher purpose.

In the old days, it was considered nobler for sea captains to go down with a sinking ship with the rest of the crew than to save themselves.

This behavior pattern was perpetuated by Alec Guinness in a 1949 movie [Kind Hearts and Coronets] in which he stands on the command bridge and salutes as the ship goes to the bottom: 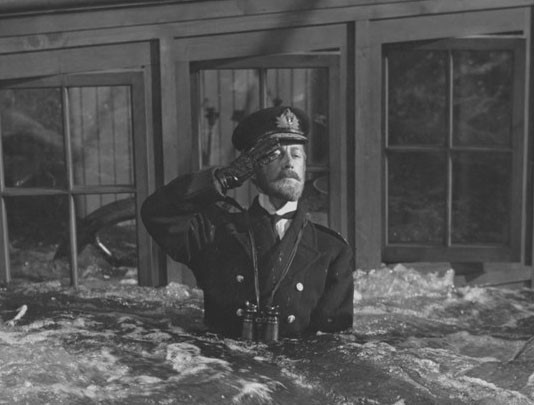 “Well,” said my Portuguese teacher thoughtfully, “you mean that Sweden is like that ship and the Swedish leaders are like Alec Guinness who chooses to go down with the ship?”

“No, our leaders do not have Alec Guinness’s refined nobility,” I replied, “but it is nevertheless in this vein that we must seek an explanation.

“Our leaders are more primitive. Their actions are motivated not by noble feelings of duty, but by a more raw and unarticulated trepidation in the face of something sacred.”

“Like savages in front of a totem pole?” suggested my teacher.

“Just so! I said gratefully. “This is basically religious. To Try to save Sweden, for example, by closing our fully open borders, is taboo.”

Social anthropology shows that natural people and other savages are sometimes afraid of good things that seem obvious to modern common sense, for example being photographed or vaccinated.

Blindly following the commandments in the sacred scriptures is more important to us than saving ourselves, perhaps because violations of the commandments are expected to have repercussions when life is over. Maybe we feel that hell is threatening.

[Just like the good Muslims who fear Allah’s magnificent little hell more than anything else.]

The most sacred script of all is the UN Universal Declaration of Human Rights. The most sacred commandment is the very first, which states that all people are “equal in WORTH and rights”.

Admittedly, in the original text the word is not “worth” but “dignity”, but the Swedes as the only country in the whole world have wrongly translated it [intentionally or not?] to “worth”.

[…therefore all modern Swedish (post-1975) legislation usually has something to do with worth — it is staunchly worth-based, so to speak!]

This sacred text and many others, such as the Children’s Convention, are administered by the United Nations, the Church of the Sacred Texts. The UN is worshiped by the Swedish establishment, even though it is really a corrupt and undemocratic organization.

Other sacred texts are the Geneva Convention, the Swedish National Agency for Education’s curricula and the Swedish Instrument of Government, the possibly most important part of which reads as follows:

The individual’s personal, economic and cultural well-being should be fundamental goals of all public activity. In particular, the general public shall be ensured the right to work, find housing and get an education; and social care and security and good conditions for health shall be promoted.

[…Housing shortages have prevailed since 1945 — today, more than 1.5 million homes are lacking; education, particularly the schools, have since then continuously deteriorated until they are now the worst in the OECD]

The Portuguese teacher considered this for a while. Then she said she understood that the Swedish official self-harm behavior must have some such religious basis.

If all people on earth are equally worthy [!] and everyone has the right to seek asylum in order to get work, housing, education, security and health care [that is: everything for everybody] at the expense of Swedish taxpayers, it is clear that no barriers may be established at the Swedish borders that put an end to the influx of fortune-seeking migrants.

“Of course, for deeply believing people, leaders or not, respect for the divine rules is more important than the fate of individual citizens.”

She then added that in that perspective, she could understand why Swedish leaders would rather let Sweden go down than violate the God-given commandments.

12 thoughts on “Our Religion Prohibits Us From Saving Our Country”