Our Dutch correspondent H. Numan sends the latest on the show trial of Geert Wilders.

New developments in the court case against Geert Wilders

In a few days, on the 24th of September, we’ll see if The Netherlands is a banana monarchy or a constitutional monarchy. Why? Because the court then has to issue a verdict about new developments in the case against Geert Wilders. If the country considers itself a true democratic state ruled by law, the court has no other option than to dismiss the case. However, I’m almost certain the court won’t do that. Too much has been invested in the destruction of Geert Wilders and his party, the PVV.

We have seen in the past that the rule of law actually no longer exists in The Netherlands. Let’s take a look at this case, for people who are new to it.

After the municipal elections in March 2014 Geert attended a party in The Hague. He asked his electorate if the wanted more or fewer [criminal] Moroccans in the country. The crowd cheered “minder, minder, minder (fewer, fewer, fewer)!” “Okay”, Wilder said, “we’re going to work on that.”

The progressive part of the country was in uproar. They did everything legally and illegally possible to get him indicted. Illegally, you may ask. Yes. In many cities police stations were open longer than usual, and supplied pre-printed complaint forms. You could mark one or all choices on the multiple choice form why you were offended by Geert Wilders. Just cross what you liked. Signing was not a problem. A thumb mark would do nicely, in case you happen to be illiterate or had a phobia of pork, alcohol and writing. There were many Moroccan volunteers present on those police stations to assist ‘grievously hurt’ people to fill in the form correctly.

The court was, like the first Wilders trial, a kangaroo court with the verdict ready before the trial even began. A complete circus. I have never ever heard about pre-printed complaint forms readily available for the public anywhere. Possibly the North Korean or mainland Chinese justice departments might look into that; it’s very helpful in political trials.

Any idea about the logistics involved? The coordination necessary? We’re not talking about one progressive commissioner who dragooned his unwilling officers to do his bidding. It was nationwide. Thousands of pre-printed forms had to be printed and distributed to most police stations. Those stations had extended opening hours, to accommodate the complainants. That means a lot of officers were doing overtime; those volunteers had to be found and fed — who’s paying for that entire operation? The taxpayer, of course!

This is entirely my opinion, of course. As nobody, not even the defense team, filed complaints with the court about this haphazard filing of legal complaints, I probably am not correct in seeing this as illegal. Though it really seems that way, at least to me.

After a lengthy trial Wilders was convicted, but not as most progressives had hoped for. He wasn’t fined €5,000. Had he been sentenced to jail, he would have been ejected from parliament. The prosecutor tried that, but the court didn’t go along with it. The court judged him guilty, but without penalty. Both Wilders and the prosecutor appealed.

The court wasn’t exactly happy with Wilders spilling the beans. He first tried to object to judge Elianne van Rens, but that was rejected. Mr. (Dutch title for lawyers, she actually is a woman) Elianne is member of D66, a party which considers itself the arch-enemy of Wilders. She said in an TV interview before the trial began that in her opinion Wilders should be convicted. This was not enough to have her removed. I wonder what else she could have done? Knotting nooses during the trial? Grinning at Wilders while slicing with her finger across her throat? The court expressed in her verdict its displeasure of Wilders calling it a kangaroo court and saying that the court had the verdict ready even before the trial began.

But there is more…

What Wilders said wasn’t as ‘racist’ as it seems. Our politically correct friends said far worse things. For example, Hans Spekman and Diederik Samson, both leading the socialist party said things that should be explained in court. But as they are the ‘gut*’ guys, they don’t have to do that. ‘Moroccans who don’t want to behave correctly have to be humiliated’ apparently is not a criminal offense. Before I forget, the court and the prosecution tried to extend the definition of “race” to include Moroccans, so he could be convicted of racism. That didn’t work, fortunately.

Okay, that brings you up to date. Now for the news. The appeal will be heard on the 24th of September.

However… last week evidence appeared that the minister of justice Ivo Opstelten was involved in the prosecution of Geert Wilders. This is something he, his ministry, the prosecution and the court have always denied. Basically, before the trial the DA went to the minister, asked ‘should we prosecute this gent?’ at which point the minister said: go right ahead. Rid me of this troublesome parliamentarian! In the evidence this is stated in so many words. 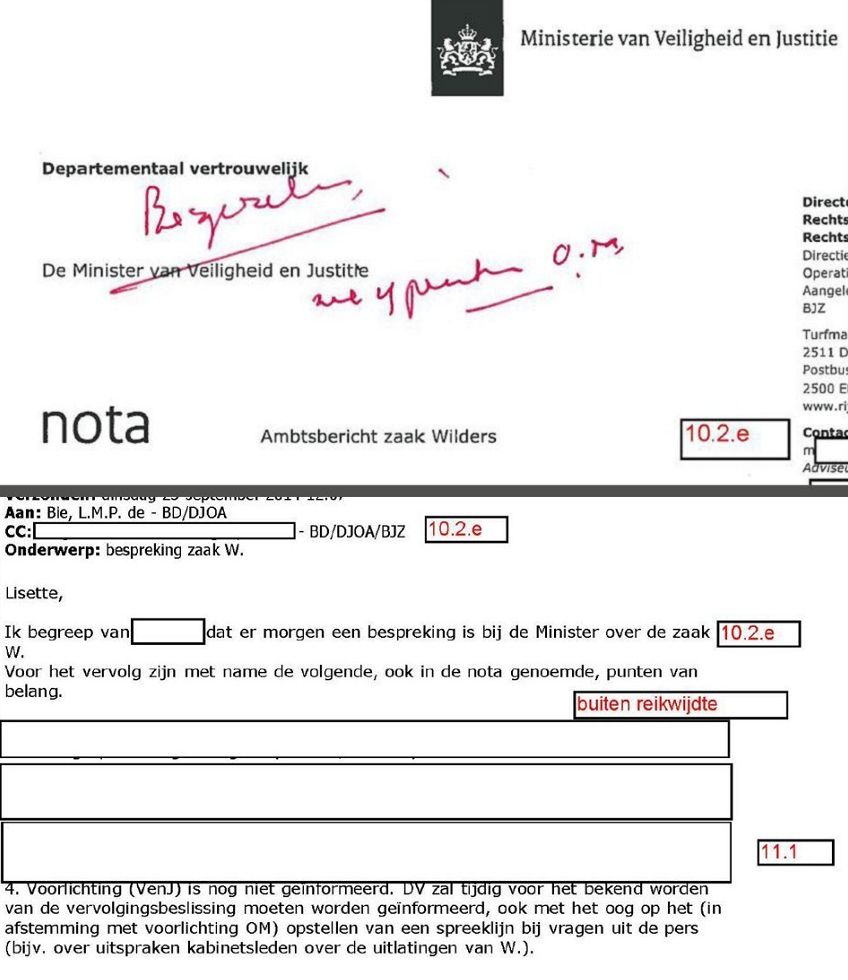 That fact alone should be enough to invalidate the entire court case. Will it happen? I doubt it. Ivo Opstelten is already a dead duck. He had to resign, along with his deputy minister Fred Teeven, because the latter lied to parliament, and Opstelten supported him. Fred Teeven, a junior minister, now is — believe or not — a bus driver… It’ll be difficult to get them fired again. It’s a different offense, but the powers that be will be very lenient. After all, anything goes to get Wilders out of the way.