This week’s installment of Dymphna’s greatest hits is from May of 2005. Like last week’s, it’s fairly timeless. Unfortunately, the website she originally linked to seems to no longer exist, so the link has been removed. 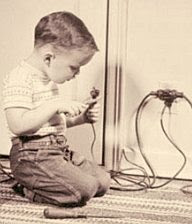 by Dymphna
Originally published on May 5, 2005

Walter Williams doesn’t fly commercial airplanes much anymore. He used to, traveling to speaking engagements several times a month. But then along came 9/11. Or rather, along came Norman Mineta with his truly bizarre idea of “security”:

“While the security procedures are not based on the race, ethnicity, religion or gender of passengers, we also want to assure that in practice, the system does not disproportionately select members of any particular minority group.”

Never mind that the sentence itself is strange bureaucratese. We’ve become inured to the debasement of the language. Here’s what’s appalling: we may not speak about the reality that a particularly gendered ethnic group created the hell of 9/11. The elephant in the airport is the disproportionate self-selection of Muslim males on the “Most-Wanted” terrorist Lists.

The only group we avoid criticizing more than Muslim males are gay Episcopalian bishops.

This demand for political correctness has gone beyond the ridiculous into the regions of banal evil. There is an ugly strain of utopian idealism in our country, a virulent insistence on ‘fairness’ that undermines intelligence, merit and achievement. Not to mention virtue, the refuge of the uncool.

The malignant organism that rips the social fabric of American life, leveling differences while it pretends to celebrate them, PC everywhere insinuates itself into the crevices, using a cover of well-meaning to create vacuous, bizarre realities like “zero-tolerance” and unattended college sports programs for women (while men’s programs are eliminated).

It demands — and gets — bathrooms for the transgendered who cannot decide which restroom to use.

Pornography is our constitutional right but we shouldn’t be looking at images of the Twin Towers falling.

“Give Peace A Chance” means no dodgeball at recess.

“No Child Left Behind” means all will be mired in ignorance together. Even fewer will be able to point to Europe on the map, or know a quadratic equation from an interrogative sentence. A what??

No, ignorance is not the perceived problem. Unfairness is. The smallest infraction is insufficiently negligible to escape its notice. Yet PC has so blinded formerly normal people that children wander the school halls bent on murder and no one sees them until bodies are lying on the floor. “But he was such a nice boy.” More calls for gun control and therapy for bullies.

Political correctness has made us so stupid that some of us demand conversation with vaginas.

If we don’t rise up and call a halt to this social rot, terrorism will be irrelevant. We’ll be protozoa.

Orwell had no idea, absolutely none.

Read all of Walter Williams’ “The Sad, Stupid State of Airport Security.” It’s a three-parter at Human Events, beginning with the above link.