The following guest-article by Barry Webb was published at Vlad Tepes on Monday. 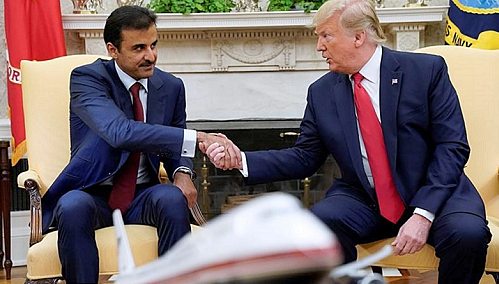 A Saudi guest on Sarah Damdhawi’s tafa’alkom program aired on al-Arabia TV on 04 August 2019 said that: “Qatar killed Hamza bin Usama bin Laden as a gift to the U.S.

A little background is in order here. Hamza, the son of Usama bin Laden, was the future of al-Qaeda. He was the sole figure on this planet whose pedigree and family background could have made it possible to unite all terrorist groups, Sunni and Shi’a, into one “terrorist superpower.”

As a result of Hamza’s potential as a terrorism Fuhrer (and Hamza’s personal threat to avenge his father’s death at the hands of the U.S.), the U.S. had placed a one million dollar reward on his head.

At this point one might ask, why would Qatar, one of the world’s top three state sponsors of terrorism, snuff out one of their key assets as a gift to the Trump administration?

The answer can be found in last week’s arms deal between Trump and the Emir of Qatar. That was part of the price that Trump asked for in exchange for modern weapons. The rest of the price was, of course, the billions of dollars that will go into U.S. companies and the payrolls of U.S. workers.

A nice pre-election package. Money, and the elimination of Hamza bin Usama bin Laden. A win-win for Trump and the U.S. Right?

Qatar has been playing this game for decades. With one hand they pretend to be helping in the war on terror, while their other hand supports terrorism. This is a prime example because their execution of Hamza bin Laden and their acceptance of U.S. weapons will not whet their appetite for terrorist mischief elsewhere. Just ask Syria, Somalia, Libya, Mali, and the rest of North Africa.

But the real victory that Qatar won is much more profound. They were willing to eliminate an asset like Hamza bin Usama bin Laden not just as a door through which they could obtain U.S. weapons, but because performing such a sacrifice will continue to keep the U.S. and the rest of the West totally blind to Qatar’s long term goals.

These long term goals are much more dangerous and much more permanent that anything Hamza bin Usama Bin Laden and his rag a tag band of jihadis could ever muster.

Qatar is in this for the long haul. Taking a single rook off the chessboard while setting up a checkmate of your opponent’s king is a small price to pay.

This dangerous long-term game Qatar is playing will be revealed in tomorrow’s Mideast intel update.

Barry Webb had a 25-year career as an Arabist for the NSA, holds two MA degrees in related subject matter, and is the author of Confessions of an (ex) NSA spy: Why America and its Allies are Losing the War on Terror. His website is: www.barrywebbauthor.com He is currently a senior fellow with the DC-based Americans for Intelligence Reform at www.intelreform.org