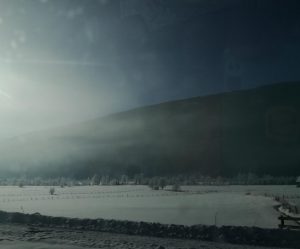 The Baron has taken a well-deserved break to visit family and left his house to me. As your housekeeper, I am honored to introduce myself. My name is Elisabeth Sabaditsch-Wolff, and I reside in a crazy place called Central Europe, a place that I often no longer recognize. It pains me to watch my country, along with so many other countries, transformed into a resemblance of a Third World country.

The following words were originally penned in German, but the anonymous blog owner “Nicht mehr mein Deutschland” (No longer my Germany) kindly provides an excellent translation. What you are about to read epitomizes what I, along with millions of other native Europeans, see and feel every single day. The author adeptly describes a heavy and aching heart witnessing Germany’s transformation, the breakdown of public infrastructure, of society, of losing of free speech, and the rise of incapable politicians that magnify their capabilities.

Summer is waning; fall is just around the corner, not only for Germany, but for all of us. The change of season is inevitable, a part of life. Germany need not be waning. But  Germany believes its fall is inevitable.

How Germany Is Changing

When I was a child in Germany, some things were ugly on the outside, but pleasant on the inside. The houses they had built after the war were ugly, as were the hairstyles, the furniture and the fashion.

But what was pleasant and plentiful were the old houses in the cities, the winding streets, the bridges and rivers, the fortresses and castles. The rich nature everywhere, the well-kept parks and the large forests, the fields and the vineyards, the sea and the mountains.

And people were content. Most had a job. And almost no-one had to fear for their future, or their security, or that of their children. There was the cold war, but it seemed remote and didn’t affect us directly. Most of all, people were more alike. Most spoke the same language. They felt at home in the same culture. And they enjoyed the same, principal values. Those who had come here to work and who spoke a different language were viewed as guests, and if they wanted, they could usually stay. They were treated with respect, and the same was expected in return.

Today Germany has become a different place, and it is continuing to change, permanently. The houses built today are nicer than those constructed after the war, even if not as pleasant as those from one or two centuries ago. The furniture is nicer, and the fashion and hairstyles are, too.

But the streets are in need of repair. The schools are slowly falling apart. And on the pavements, in the cities, the homeless sleep at night. Many people have worse jobs than before, and they can afford less things that have a permanent value, like houses or flats. The streets are crowded with large, heavy lorries with foreign license plates, bringing goods in and out of the country, to be processed cheaper elsewhere, with traffic jams everywhere. The parks of yesterday are barely being tended. And outside the cities, in some forests, wolves are howling like they last did centuries ago.

Most of all, people have changed, they feel more rushed and under pressure. Many fear for their future and their safety, and that of their children, if they still have any. People are worried that they soon will be owning less, and perhaps that is why some have the urge to show even more that they do own something. Cars are larger than before, and the people in them more aggressive and reckless. Those making the most money take it from others unchallenged, keep some of it and hand the rest upwards.

In politics, those who have increasingly attained power overestimate themselves and are more and more removed from the needs and opinions of those who voted for them, and who in a democracy they should naturally be representing. Instead, these people are often driven by simple and overrated ideologies, more than ever wittingly or unwittingly adhering to the wishes of those who, with a mixture of coddling and manipulation, have enforced this to the disadvantage of all others. In these times of lobbyism and one-sided medial distortion, with little balance, ethics or humanist values, the richest of the rich reign once again.

Through the shifting of political responsibilities towards European agencies, German parliamentarian democracy has been weakened. Through the introduction of the Euro, the possibility of a devaluation of national debt has been taken. Through the shouldering of debt of other European countries and private banks, every German citizen has been made responsible for the mistakes and greed of others. And through the introduction of an anti-debt regulation in the constitution, the path for further privatisation has been paved.

And last of all, and again as a consequence of political decisions, many people on the streets and in the cities don’t speak my language anymore. They don’t live my culture. They don’t know my country. And many of them don’t even seem to want that. Many of them have come here because they wanted to worry less, and the rich beckoned them in because they demanded cheap labour and uncritical consumers, and the ideologists because they like to dream. But where all these new people should live, and where they should work, and who should pay for everything, till and if they ever earn their own money, no-one has ever clarified.

Some of these immigrated people seem less and less to respect my country, its people and its values, and they are changing the tone and the atmosphere in this society profoundly. They voice their demands loudly and take it as given that one supplies them with all of what other people in this country have worked hard for generations to attain. In their demands and ideas they are supported by some who are from Germany, but seemingly don’t like it very much.

Most of all, no one asks if all this change is actually deemed desirable by most of those who have been here longer. Instead, one has imposed a unified ideological mindset on the outside and an unrefrained neoliberalism on the inside. It is the worst of both worlds, and it destroys all that once made up our culture.

At the same time, I have to worry about still being able to say or write something like this. Quickly and easily words like populism or agitation are used, and it supposedly always is about equality and tolerance. But curiously enough, it’s never about the tolerance towards those who adhere to the common rules and laws of this society and consistently demand that from others, too. Freedom of opinion has become a foreign word. Instead, those who make and impose the new moral rules are increasingly resorting to any means.

One has learned very little from the past in Germany. Under the fascists and in communist Eastern Germany, one neighbour denounced the other, some people their own partners, and sometimes even children their parents, because the children didn’t know better and one had told them in school that it was right that way. And always, afterwards, one shook ones head and allegedly asked how all this could have happened.

And now, in this country, once again generations of people are being raised, in schools, in universities, and by politics I don’t understand, and through media that either is owned by the state or again by the very rich. And the people today learn that intolerance against those who think differently, who voice criticism, and therefore are portrayed as intolerant, is totally alright. Denunciation, too. Defamation. Isolation. Or hate and violence. In fact, much is just like it was those times before. But today, people seem less educated, less informed and more manipulated than they have for a long time.

That scares me. Because again, most people are just learning off by heart what supposedly is right and what is wrong, instead of learning to think on their own. Is it in our genes? Is it our culture? Are we, on the whole, just too stupid? It may be of advantage to adapt and go with the crowd. But it can be really sad. And it makes life difficult for those who aren’t fooled by bread and circuses, who still have some education and the ability to think for themselves, who can hear the nuances and perhaps have a better feeling for the essence of things.

What I am sure of, is that the only people who really profit from all this madness are very few, very rich people, somewhere, in a very different world from mine and that of most others.

I love this country. But it is not my Germany anymore.